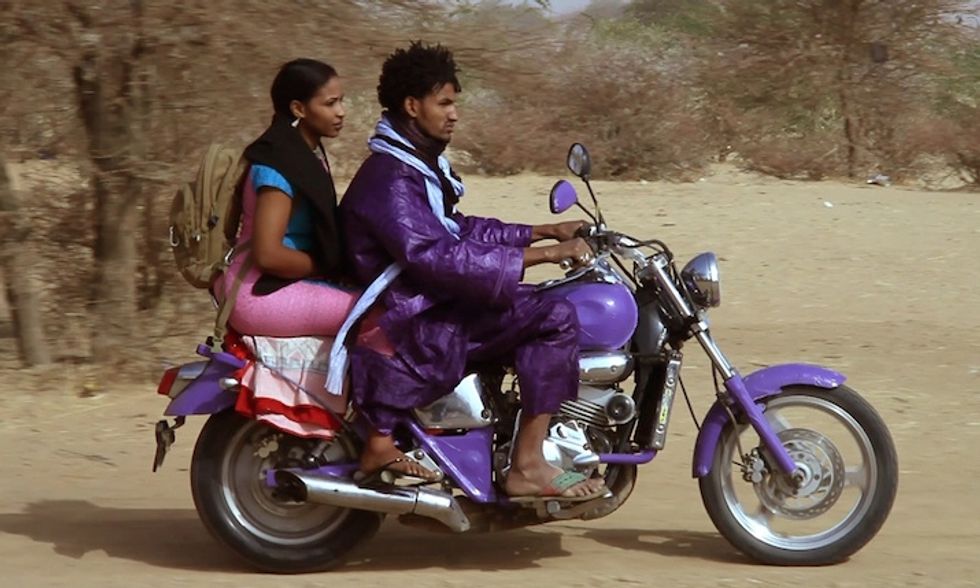 What would Prince’s classic 1984 film Purple Rain look like if it were retold from the perspective of a Tuareg guitarist struggling to make it in the Nigerien music scene?

Thanks to director Christopher Kirkley we now have the answer to that. Last year, the filmmaker and Sahel Sounds record label founder shot Akounak Tedalat Taha Tazoughai ("Rain the Color Blue with a Little Red in it"), a Purple Rain remake starring Nigerien musician Mdou Moctar and the first full-length film to be shot entirely in the Tuareg language.

Since its release last year, the movie, which the director says came about as sort of a joke, has travelled far past the Sahara, engaging audiences throughout the world with its captivating, Tuareg take on the familiar tale of a young artist striving to make it in the music business against all odds.

We got a chance to speak with the director about the inspiration behind the film, his experience shooting in Niger, the response from Western and Nigerien audiences and, of course, the music. Read our conversation below, and be on the look-out for Akounak Tedalat Taha Tazoughai to be released on DVD in the upcoming months.

What made you want to make a Tuareg Purple Rain remake?

I wanted to celebrate and showcase the Tuareg guitar scene through a fictional lens. And you can't talk about fictional musical films without talking about Purple Rain. It's such a landmark film that set the tone for everything—from other musician-based films to music video as an art form. It began, as most ideas, as sort of a joke, but also as an imagining of "what would Purple Rain look like retold in the Sahara?" After years of talking about, I realized the only way to find out was to make it.

Mdou's story is very different from "the Kid's." The culture in Agadez is much more conservative, not just religiously, but some of the flamboyance of Prince's character and central themes of Purple Rain just don't translate. Other elements were remarkably similar, and I think are universal —the musical competition, problems of love, familial responsibility, and making peace with your ego. The music played a central part in the film and we adapted the story to fit his songs. So many of his compositions are consolations about love and lessons on life, so they fit nicely into the narrative.

The movie also draws inspiration from Jimmy Cliff's "The Harder They Come," how did that film and song influence Akounak?

The Harder They Come is brilliantly shot film, among other things. It was made very DIY, on a shoestring budget. It stood as a reminder that we could make a film with no experience; that it was just a matter of getting the pictures we need to tell a story. The Harder They Come was also a huge film in Jamaica, and we wanted to accomplish this as well. We didn't want to make another film just for Western audiences to look at Tuareg culture under a didactic Western narrative.

Can you tell us more about your experience shooting in Niger?

Shooting was exhausting, a series of highs and lows. It was extremely low budget, even for Niger. There are plenty of local Niger based filmmakers that found our budget and equipment laughable. But myself and cinematographer Jerome Fino come from a world of DIY, we're used to working on borrowed equipment and bricolage supplies.

The overall project was really a collaborative piece. I'm the director of the film only because I was the only one willing to take on that role. All of us on the team did everything, picking up food, driving cars, painting the motorcycles, making tea, holding booms, organizing crowds. Every aspect was shared, and it's reflected in the final film.

The actors regularly vetoed lines and changed scenes to reflect either what they felt was more accurate, or what they felt more comfortable with shooting. It was difficult to turn this experience into a film, but the experimental nature was central to the project.

The film is groundbreaking because it's the first fictional movie shot in a Tuareg language. Why did you decide to shoot the film entirely in Tamasheq?

The most difficult issues working in another culture are always the ethics of power and representation. I've spent the past years documenting music and producing records for a Western audience. This film was an opportunity to create something that could theoretically exist across cultures. This was our challenge. Could we make a film primarily for a Tuareg audience in Niger that could also be interesting to Western audiences who want a glimpse into that world?

What's the reception been like since you've been touring the film?

It's been surprisingly well received, beyond any of our expectations. We assumed we'd be screening it in our houses for friends. But we've already screened it around the world, either with a Q&A from myself, Jerome, or Mdou. Followed by a show, of course.

How have Western audiences perceived the film vs. people in Niger?

Western audiences tend to be fascinated by what is foreign and different. There's a lot of shots of tea brewing, which is a huge part of Tuareg culture. In the West, people are curious about it, and sort of approached it as ethnography.

But in Niger, these scenes elicited cheers. There's something powerful about seeing something you know intimately projected on a big screen. Sometimes people in the West assume that it's an accurate portrayal of Tuareg culture. But Tuareg audiences see things that Western audiences miss —amateur actors, unrealistic scenes, epic coincidences. Maybe not so different from that other movie.