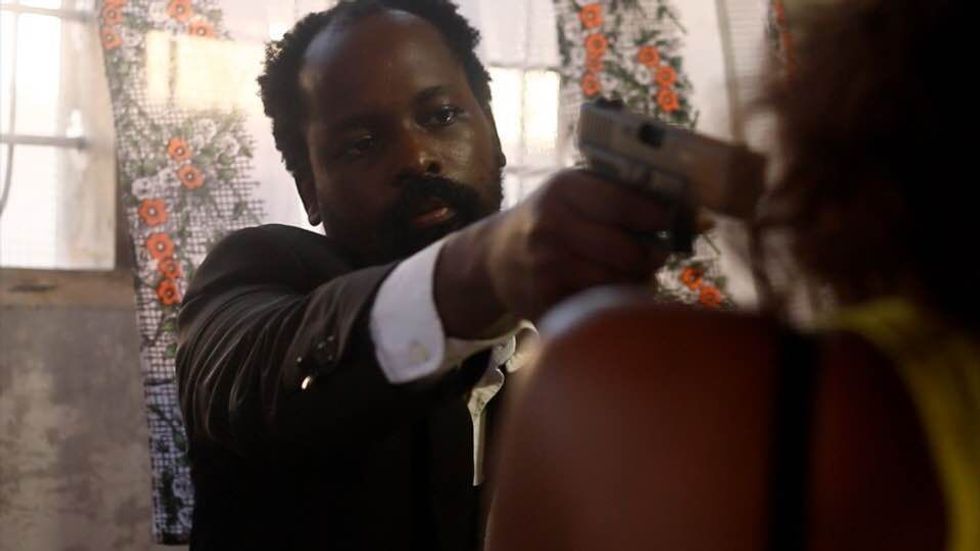 In the latest installment of Cinema Africa, Josephine Opar sat down with Tanzanian director Hamadi Mwapachu ahead of the U.S. premiere of his debut feature, Dar Noir, at the Urbanworld Film Festival in New York City.

A conflicted detective with a heroin problem and self-destructive tendencies decides to start acting right after falling for a prostitute who sees the best in him. A drug dealer, on a mission to retrieve his confiscated narcotics and mysteriously slain sex workers, threatens to disrupt the progress the detective has made in his personal and professional life.

Such is the plot of Tanzanian director Hamadi Mwapachu’s feature film debut, Dar Noir. Set in Tanzania’s largest city, Dar es Salaam, the movie explores the shift from the "Uhuru na Ujamaa" philosophy (Julius Nyerere’s brand of socialism), to the thirst for decadence and wealth—at any cost—which can be seen in the big city today.

Mwapachu is a trained actor and spent several years in London where he appeared in plays and feature films, including 2005’s Dominion: Prequel to the Exorcist. 2012 saw his return to Tanzania after losing his brother, and was also the year he embarked on this project. Mwapachu wrote Dar Noir as the third installment of a trilogy. He wanted it to be the “smallest, cheapest film possible.” Three years later, after fixing the sound and removing all fellatio references, as per the Tanzanian film board’s request, the feature appeared at the 2016 Curaçao International Film Festival Rotterdam, the Amakula International Film Festival in Kampala, the Helsinki African Film Festival and more.

We caught up with Mwapachu when he was New York for the U.S. debut of Dar Noir at last month’s Urbanworld Film Festival.

This interview has been condensed and edited.

Where did the film's name come from?

Dar Noir as a title emerged for several reasons: first, I wrote the script very quickly, in five days. About a third of the way in, I realized I was writing something ‘noirish.’ The protagonist was a detective but a very shady character at that. The female lead is a strong character—she is a confident sex worker, she is witty, her dialogue is innuendo-laden, she is something of a nod to Lauren Bacall. The antagonist of the piece, I wrote as just a businessman who is frustrated [with] trying to succeed in Tanzania, and this is very common in the business sector [there] especially at the moment—and a lot of comedy is generated as a result of this.

What have you learned about the casting process in Tanzania?

The casting process for Dar Noir was a nightmare. I did not want to use "stars" as I had heard some awful stories about their working habits, and that they were quite expensive. Having trained and worked as an actor in the U.K. for some time, I felt confident that I could take absolute novices and coach them to deliver credible screen performances. So I cast family—both my mum and niece are in the film. I cast friends who expressed a desire to act. We worked on the script, and overall, the performances are what I am most proud of in the film.

How was this film different from other films you've featured in or worked on?

I started off my writing "career" as a high concept horror writer. Dar Noir was my first character piece and I found that as a result, my voice changed. Focusing on just character liberated me. I wasn't trying to satisfy someone else's aesthetic or style. I wrote Dar Noir almost like a comedian would write a stand-up show. If I was braver, I would have been a stand-up comic instead of a screenwriter. Most of my writing heroes are comedians. There is a bit of Richard Pryor and some Bill Hicks in this, you just have to watch carefully.

What avenues are there for Tanzanian creatives to produce film and export them to the world?

The problem with film is always where does one find the money. Most Tanzanian films are made for our market. We are in an enviable position in that we’re consuming our own product. We produce a lot of films and most of them have a budget of $2,000 bucks or less, and because these films can make a profit in our own markets there is no cause to go abroad.

What has the reception been in Tanzania and on the continent?

The reception has been mixed on the continent. What Dar Noir depicts cuts close to the bone, and this scares folk. It is only the bravest of programmers that select it for their festivals. We played at the Amakula Film Festival in Uganda and we brought the house down. After Urbanworld we play in Zimbabwe at the International Film Festival in Harare—again they have a very brave festival director.

We have been rejected from a number of African festivals though, and that is because Dar Noir is difficult to categorize. People have really never seen anything like it. I thought we may have a problem with Tanzanian audiences but we have been received very well. What is interesting is watching it with a racially diverse crowd, as you have foreigners reading subtitles and Tanzanians who obviously understand Swahili, so it is interesting how they react to different things, especially the humor.

What changes are needed in the film industry to ensure better quality films are released more often?

Tanzanian cinema is still in its infancy. No doubt the talent is there in front and behind the camera. We shot Dar Noir in 2013. The industry has come a long way since then. What we need is more education, especially with respect to writing. Finding your voice can take a while. I have only just found my voice and I have been writing screenplays for 14 years.

Why did you think it necessary to explore moral decay (crime, prostitution and drugs) in your first feature film?

It was not necessary to explore Dar's moral decay but it was what I was influenced by. Crime, drugs, prostitution was everywhere, I am sure it has always been there, but now it was more apparent—it is what I saw every day. On the streets, in newspapers. The Dar es Salaam I returned to was just chaotic. I used to say to friends all the time: "This place is the wild west," a libertarian utopia. If you have money, you can do whatever you want, without consequences. What foil for a story. Anyway, clearly I was not the only one who was perturbed by this. Our new president is too, and he has begun reeling in all the excesses.