The Uncompromising Style of CJ Run 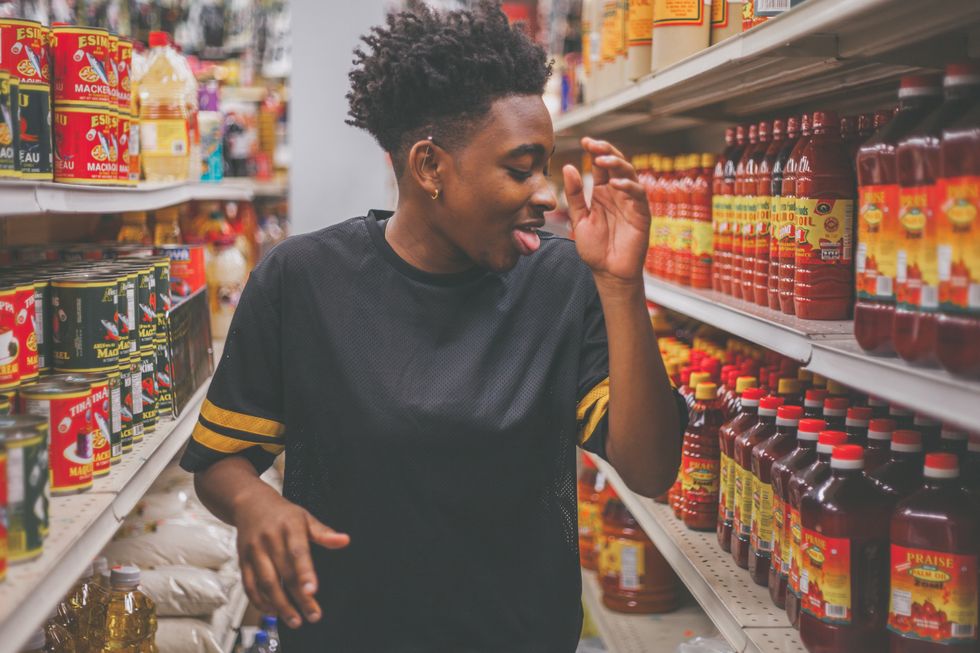 We talk to the Nigerian-British-Midwestern rapper and songwriter on their music, their style and what it means to be queer, Nigerian and proud.

CJ Run's music spans genres and diasporas with quick witted lyrics full of charm and swagger. On songs like "The Ascent" and "Tangerine" tales of queer love meet stories about the lives of third culture kids, like CJ.

Born to West African parents in Munich, Germany, the 20-year-old rapper, singer-songwriter spent their formative years in Northampton, England before moving to North Carolina for high school. It was at the very end of high school that CJ, who uses they/them pronouns, came in to their queerness, learning more about their sexuality first and gender not long after.

On The Ascent, CJ laments about those who play dumb to their pronouns. "They, them, this that knick knack paddywack / How many times can I break it down?" the rapper clarifies. Moments prior on the same track, CJ brags to potential suitors "I am that guy, I am that girl, run your world."

At the moment, CJ has something of a cult following as a young rapper in Champaign, Illinois, the college town CJ now calls home. The cult, of course, is spreading. CJ, who once attended the University of Illinois at Urbana–Champaign, recently left school to focus on music, splitting time between Champaign and big city Chicago.

A hopeful musician. Queer. Nigerian. Above all, CJ is proud. Proud to be queer, proud to be Nigerian, and unwilling to compromise on either. That same pride also comes across in CJ's personal style. Fresh, genderless—yet yearning for tradition. In the photos and Q&A below, we teamed up in Chicago with photographer Ally Almore to capture CJ's uncompromising pride.

How do you describe your sound?

It's a mixture of everything that I grew up listening to. It's R&B, it's hip-hop, it's pop and it's also Afro-influenced. I grew up listening to a lot of high-life and Afrobeat and Afro-juju music. In a lot of my latest releases and music, I've been trying to incorporate things from Nigerian languages, like Igbo and Yoruba. Sometimes I try to break it down in a song and do a line in Yoruba and the rest of it in English. My music has a very diasporic sound. It's everything that I enjoy.

How would you describe your style?

During the summer I definitely look like a dad on vacation. I like my floral button ups and I tuck them in. I love bold colors. I dress pretty sporty sometimes. I love sneakers, Adidas being my favorite. I've also been doing the two necklaces thing a lot more lately. My style is ever-changing as I get older and switch up my gender expression but as of right now we're going with this sporty slash preppy hybrid.

Could you tell us a bit more about how you came to understand your queerness?

If I look back on my childhood, I can definitely say "yeah, you were very gay." Or like "yeah, you definitely had questions about your gender." But because I didn't have a lot of access to information regarding being queer, I just thought that it was me making stuff up in my head, me daydreaming too much. So I just ignored it.

For me, it was coming to terms with my sexuality first, and then gender. I realized I was bisexual—I realized that I was attracted to men and women. When I was around 17 at the end of my senior year of high school I went to a Christian music festival, of all places, and I met somebody there that I really connected with. I knew that it was more than platonic. It was the first very blatant queer crush for me that I was just like yeah, no, I can't pretend it's not a thing any more. I feel too much. I definitely like girls. But I knew I wasn't completely disinterested in boys. As time went on, I learned more about the difference between sexual attraction and romantic attraction, and that helped me define my bisexuality.

Six months after realizing I was bi, I started to experiment with my clothing and my hair a bit more than I used to. I was 17, so my mom was letting me pick my clothes and I was going to thrift stores. I really liked wearing big button ups and men's shirts because they made me feel cool. I liked the androgynous look. I got my mom to braid the sides of my head, instead of shaving them.

One day, I was looking in the mirror and thought to myself "you're not really a girl, are you?" I looked very androgynous and I looked a little more masculine than I'd ever done before, and I was just like "I really like this look." I was like "I don't feel like a girl." So I looked it up, basically. I looked up the fact that you can not identify with the gender you were assigned but you can be like a-gender, or bi-gender or gender fluid. That was very affirming for me.

When I was younger, I always was envious of boys. I always wanted to be like boys, but not quite. I didn't know how to define it. And I knew I wasn't a trans man. But I didn't know any other way to be. When I was 17, that summer finding all those terms affirmed what my five-year-old self knew but didn't have the words for.

What does it mean to defy certain traditional gender roles?

Colonialism brought very rigid gender roles to a number of African countries. I know that in Igbo culture and in a lot of cultures in Africa, as the girl-child, I'm supposed to live at home until I get married. But my brother is allowed to move out once he finished college or turns 18. The girl-child is traditionally supposed to stay home and wait until a man comes and takes you from your parents' house. But since I am neither a girl nor am I waiting for a man necessarily to be married to, I don't fit into that narrative. That's just the simplest way to put it.

I also don't wear traditional womenswear. Finding Nigerian men's clothing that fits me is something that I have to figure out. I found a place that makes unisex Nigerian garb, which is really awesome. I think it's something that we need to start doing more. Even with cis-women, they don't want to always wear the women's clothing.

I think that us as Nigerian people we need to do a lot of unlearning of what colonialism and white supremacy has put on us as a country and as a culture. In Igbo folklore, there are tales and stories of the Ezenwanyi. Ezenwanyi literally means "a woman with the power of a king." It's a two-spirit gender identity and I believe one of my great-grandmothers was actually one.

What advice would you offer to young Africans who are struggling to understand their queer identity?

I would say that I understand and I want all of you to know that you're not anything that hasn't already been. You're not doing anything that hasn't been done before. Being queer is just as African or just as Nigerian as jollof rice or the language that you speak. Don't feel like you can't be both at the same time. Don't let anybody tell you that there's no room for you, because there is. Having to come out and face your family is very scary, and can be very dangerous. But only you can define who you are.

Do you feel a sense of pride in being both African and queer?

Even though I'm a minority, and I face a lot of scrutiny because of it, I'm very proud of being queer. I'm very proud of queer culture, especially black queer culture. I don't have a problem being proud of being African and being queer at the same time. When I did first come out, it was hard. My family wasn't as accepting in the beginning. It felt like they were making me choose and making me feel like my queerness didn't have any room in being African. It took me awhile to be able to be comfortable to proudly say that "I am queer and I am Nigerian." Right now, nobody can tell me anything. Nobody can tell me that I am less of one thing because of another. I am very confident and very steadfast in both identities.

Is there anything that's been on your mind that you wanted to talk about?

When I talk about myself I'm like "yeah, I'm defying gender in Nigerian and African communities," but the thing is I'm not defying anything. We invented gender fluidity and neutrality. It's been a part of our history for centuries, but it's been erased because of colonialism and white supremacy. It's something I hope that as a people we can come to unlearn and realize that we've been doing this all along. Queerness is not a white concept. It's something that we've been doing from the beginning of time. My existence does not have to be such a revolutionary act.

My favorite Nigerian dish is egusi soup. If it's not egusi soup it's pepper soup. And it's always either with beef or goat meat. We do egusi soup with bitter leaf, not spinach. Spinach is gross. Don't put spinach in your egusi soup.

Do you hope to perform in Nigeria?

Performing in Nigeria would be a dream. It's mainly a matter of safety as there are no laws protecting LGBTQs. If I can do a show there and not have to worry about me and queer audience members being harassed, then for sure.

Who are Nigerian artists you'd want to collaborate with?

I'd love to collaborate with Maleek Berry, Wizkid and Yemi Alade plus other artists of Nigerian descent like Little Simz, MNEK and Olukara. I've been a fan of their work for a while now.

Alyssa Klein is a writer based in New York City. She's formerly Senior Editor at OkayAfrica and the Social Media Director of the Women's March.