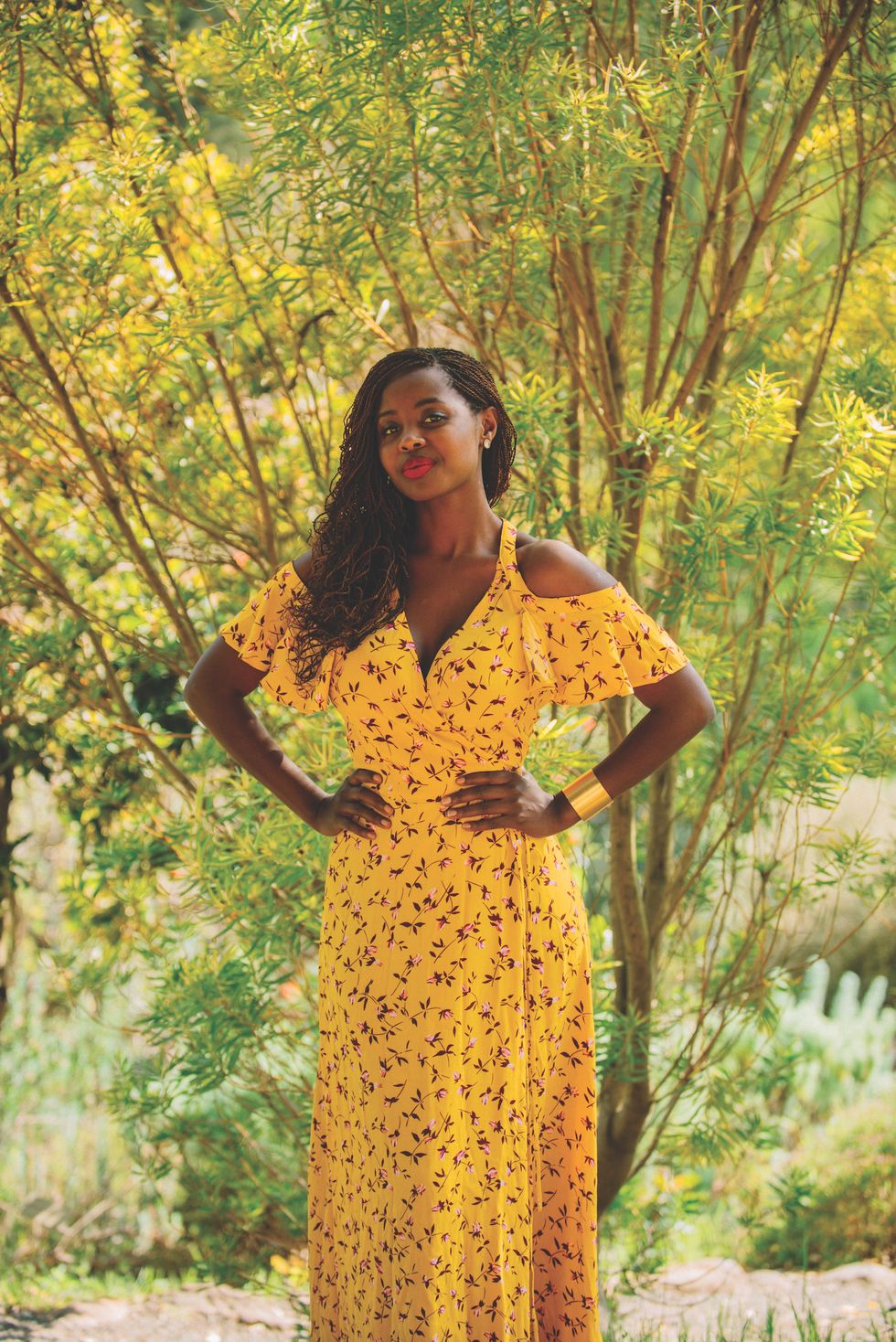 We spoke to the Rwandan author and activist about life beyond being a refugee, and the message she wants readers to take away from her memoir.

Clemantine Wamariya is the textbook definition of a "survivor"—but don't call her one.

The activist and writer spent much of her formative years in refugee camps across the continent after fleeing Rwanda during the 1994 genocide. At the age of 12 her and her sister received refugee status in the US.

Her story is undeniably affecting, one that was brought to national attention through somewhat of a spectacle when she was united with her parents at the age 18 on the Oprah show after winning an essay contest. Since then she's furthered her human rights activism, worked as a council member for the US Holocaust Memorial Museum—to which she was chosen by President Obama—and spearheaded several initiatives aimed at helping refugees.

Because of all of this, it's easy to assign the label of "survivor" to the 30-year-old activist, yet simply labelling her as such doesn't even begin to convey the fullness of her experience. She's more than just a "humanitarian success story."

"I'm not going back to being defined as a genocide survivor," said Wamariya over an extensive phone conversation—and why should she? After all, there is an actual human being behind every story of hardship or victimization—Clemantine wants us to remember that.

In her debut memoir,The Girl Who Smiled Beads: A Story of War and What Comes After, Wamariya speaks of this truth, detailing her experience as a refugee as a means of taking control of her own narrative, and averting the Western gaze and its limiting, often trope-filled perspective.

We caught up with the writer ahead of the book's release. Read our conversation below.

What inspired you to write this book?

To give you just a little bit of background, I had been in the United States for three years, almost four. I was not aware of the world, beyond the world that I had lived in. I was in and out of rescue camps and different parts of southern Africa. Finally when I had a full concept of the world history I observed, I noticed that everybody was walking around like everything is fine. I was like, "no, it is not, stop. I need an exit button."

It's like "where do I go from there." Anyway, I knew I had to write. This was in 2004, so this process has been 12 years of just really being aware of what I wanted and doing everything I could to make it possible.

What is the story behind the title "The Girl Who Smiled Beads?"

"The Girl Who Smiles Beads" is a fairytale that my nanny used to be able to help me understand the world. My grandmother helped raise me, and being a caregiver in Rwanda is an honorable position, because you're extending a child's imagination of the world. I was born to the sound of her singing to me and telling me stories. One of them was "The Girl Who Smiled Beads."

In 2011 I was reviving [the girl who smiled beads] and bringing her back to life. For the sake of being able to continue my journey because I really wanted to be that girl. I went through this journey in nine different countries and people never saw me because they saw a refugee. They saw an orphan. They saw someone who is poor but I kept smiling on.

The job was for me was to observe, and to see what they could not see. In Rwanda, if someone sees you and they say you basically smile life, you smile radiance. It's the highest compliment you can receive.

You mentioned that you've been working on this book for at least 10, 12 years, what about this time made you ready to share the story with the world?

I believe in the time. I looked around and I had everything I could possibly think of. I am not young anymore, I am a full-grown woman. I have a wonderful family, I have my health, my house, incredible friends. All I want now, is for the world is to value life. The Girl Who Smiled Beads wanted a child—I just want people to value that child and the child in them. I want women and men to value the beauty of creation. And I thought, if only I could share my observation of where the children are not being taken care of, then I will set myself free from this narrative that I was not of value [as a child]. I'm a mirror to millions right now. Everybody who's being kicked out of their homes for different reasons, economic reasons, for race, for religion. Earth is our home. And the best home we have is our life, our heartbeat.

Your book is a memoir but it's also history being written from a non-Western perspective. Was this something that you are thinking about when you wrote this book?

I've been meditative about this. I've been very much aware, it's like when you walk into a classroom and everybody, they are experts on your life and you're just like, 'wow, what?'

Once upon a time, we [Africans] reigned, we are everything. We've been everything to everybody. All over the world—and nobody becomes somebody to somebody if their hearts are not strong, if their minds are not strong. Growing up in Congo, growing up in Rwanda, in Tanzania, or Mozambique, or Kenya. I have seen us. I've seen me. I've seen every part of my strength, and every part of my weakness. And so writing about those places, I was intentional because I wanted to show what was not being seen. We smiled beads.

The word genocide cannot describe the lives in which have been lost. And I'm not going back to being defined as a genocide survivor. I'm like "excuse me, genocide and survivor is not a part of my vocabulary. Do not speak it out to me."

How does your book contribute to the conversation happening around refugees settlement and the migrant crisis.What can we learn from it and apply to how we approach these issues?

Absolutely. If you read the medium piece, it'll give you some more answers. The reason why I wrote the book was to give people an insider's perspective on the daily life of those who are seeking refuge, especially those seeking refuge after a war. I realize that many people actually don't know what goes on day in and day out, and that's why I'm very meditative. [I provide details] like here's how you get water, here's how you get thrown in jail. Here's what happens when a country kicks you out.

I spend a lot of time on this one moment in the book where my sister and I and the rest of the women have been thrown into jail in Mozambique. All the women just started protesting and screaming, and a nun passed by and heard it and she started screaming at the police. "How dare you imprison children and women, because they're seeking refuge in this country?" It gives you a sense of what goes on in some people's daily lives.

On a personal level, I'm triggering a lot of people who have forgotten. On a community level, I talk about my sister and her daily life in Chicago, taking care of so many people from different parts of the world that just arrived in the United States on refugee status. I share her experience to give people a sense of those communities.

People have to understand the political history of what has caused conflict and mass killings. That book is compact, like a roadmap. It's a roadmap to all parts of our senses. I just want to awaken people's senses.