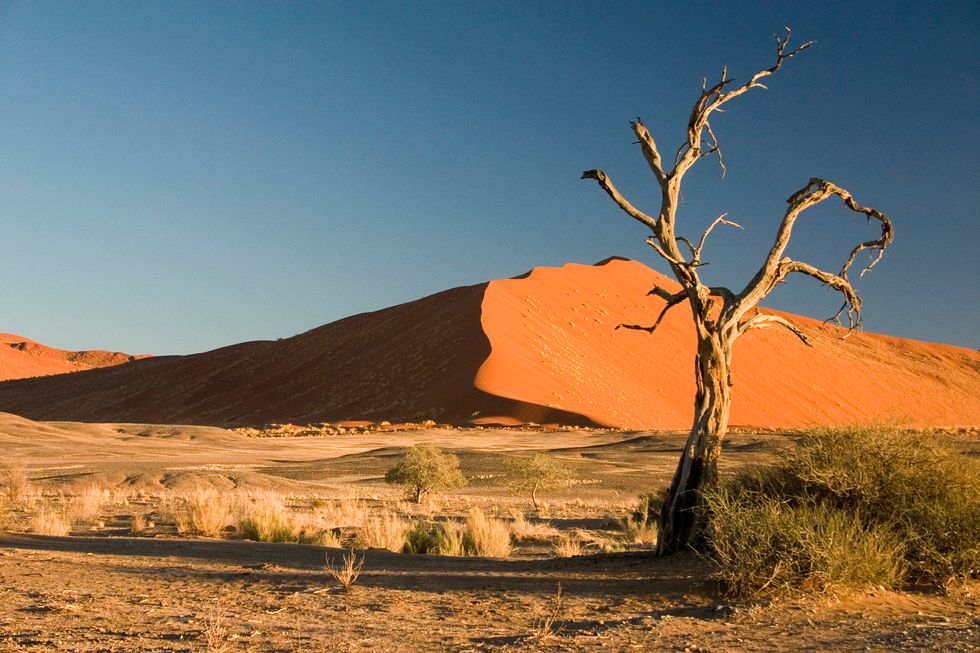 We speak with Lerato Letebele, of the climate change organization 350, about how climate change is impacting the continent, and what we can do to help fight it.

Climate Change is here and it doesn't give a fuck about you or me. Climate change is a violent process. Not only does it wreck the planet, it has and will create conditions for social turmoil. Mass migrations out of severely impacted areas, wars over dwindling natural resources. Meanwhile, fossil fuel corporations, the ones who are reaping massively obscene profits from our planet’s demise, are disseminating misleading information to the public, arguing that climate change is not real.

Since it’s #Goals month at OkayAfrica, we’re thinking about what we can achieve. How do we make sure our earth does not turn into the setting ripped from the pages of an Octavia Butler novel?

I spoke with Lerato Letebele, the Regional Communications Coordinator for Africa and the Middle East with the climate change organization 350.org. Letebele tells me that 350.org is an organization that “contributes to building the global grassroots climate movement that holds our leaders accountable to science and climate justice.” They “utilise online campaigns, grassroots organizing, and mass public actions to oppose new coal, oil and gas projects.”

350.org also aims to “oppose new coal, oil and gas projects” while attempting “to build 100 percent clean energy solutions that work for all.” It’s an organization that has a network that extends to 188 countries. Their work in Africa, which began in 2007, is mainly conducted in Kenya, South Africa, and Ghana.

"South Africa’s political history offers a striking example of using divestment to mobilise social change. The moral imperative to end apartheid injustices drove individuals and businesses across the world to sell off stocks from investment institutions and retirement and mutual funds from businesses linked to the South African government." And now the fossil fuel divestment movement is growing in South Africa -- especially with the current call for Cape Town to divest. Check out the link in our bio to read more. [Photo of Lerato Letebele from @350africa ]

Abel for OkayAfrica: So, we hear about climate change and global warming a lot, but i’m not sure how many folks have a grip of what those terms exactly mean. Can you offer a short summary?

Lerato Letebele: Climate change is any long-term significant change in expected patterns of average weather of a specific region over an appropriately significant period of time. Climate has always changed in the earth’s existence. However, when we use the term “climate change” now, it is to describe shifts in weather conditions in approximately the last 100 years and the next 100 years or so.

Global warming refers to the increase of the Earth’s average surface temperature due to a build-up of greenhouse gases in the atmosphere that normally surrounds the earth and keeps the surface of the earth warm and able to sustain life.

When we burn fossil fuels (coal, oil and gas) we contribute to global warming. This is currently happening to such an extent that the climate is changing. This is why we speak about “human-induced climate change.” We now know for certain that there is no room for fossil fuels if we are serious about addressing the climate crisis.

So I know that the “West” and wealthier countries and people disproportionately contribute to climate change yet the “Global South” and poorer people of color seem to be facing and will continue to face the brunt of its effects. Can you elaborate on that?

This is a climate injustice issue which has been denounced for years and is even recognised by the UNFCCC under the principle of ‘Common but Differentiated Responsibilities.' These are based on historical differences in the contributions of developed and developing States to global environmental issues and in particular climate change. While Western countries industrialized and developed economies based on fossil fuels starting in the 1700s, countries in the Global South now face the impacts of this destructive fossil fuel induced development, while still needing to develop themselves. To date, $36bn is owed to Africa as a result of climate change damage on the continent. Africans experience the greatest impacts of climate change, despite having contributed the least to the global crisis.

In order to stop the unprecedented climate crisis we’re living in, fossil fuels have to remain in the ground, all new coal must be kept in the hole and be replaced by a 100 percent renewable energy economy globally. Worldwide coal consumption is on the decrease. The transition to sustainable renewable is already happening. Climate change is caused by large emissions of industrial countries. Developed countries are obligated to lead this urgent shift. However, we know that some are reluctant and others unwilling to revisit their commitments to address climate change under the Paris Agreement.

For countries in the Global South, whether the West acts on climate change or not, the commitments made during COP22 under the Climate Vulnerable Forum where 47 countries, 16 from Africa, committed to meet 100 percent domestic renewable energy production as rapidly as possible. This sends a clear message: Africa can leapfrog straight to renewable energy sources and decentralised off-grid technologies benefiting millions of people. We need to break our dependency on fossil fuels for energy. We have solar in abundance. This is the natural resource that will transform Africa's energy mix.

What are some concrete effects we are currently seeing in regards to climate change in Africa in particular and worldwide in general? Can you name some countries that are currently being impacted and what is happening there?

The first are extreme heat, drought and famine. Warming is increasing the severity of drought and periods of extreme heat. A warmer atmosphere sucks more water from the soil, increasing the likelihood for drought conditions. Through 2015 and 2016, drought and rising temperatures left over 36 million people in Eastern and Southern Africa facing hunger. The drought was the worst in Ethiopia’s recent history. Researchers have found that even with a small increase in temperature, (1.5°C-2°C), drought and desertification will contribute to farmers losing 40-80 percent of cropland conducive to growing maize, millet, and sorghum by the 2030s-2040s.

Then there're water shortages—since the 1990s, South Africa has lost a third of its farms due to water scarcity and a trend toward larger and more intensive farms due to globalisation.

Next is sea level. Nearly 56 million Africans live in coastal zones that face seawater inundation as sea levels rise. Already, low-lying areas in Lagos, Nigeria and Accra, Ghana have experienced heightened erosion of the coast, affecting local infrastructure. At this point we cannot stop sea level rise, but if we act now to keep fossil fuels in the ground and limit warming to less than 2°C, it can mean the difference between a sea level increase of 50cm and an increase of 10 metres or more.

With the way things are currently going, and if additional action is not taken, what are some scientific predictions of what will happen to our planet?

2016 was already recorded as the hottest year on record. The urgency could not be more heightened: climate change continues to unjustly impact the most vulnerable people worldwide as climate impacts increase in frequency and intensity at a time of lacking climate leadership.

So some of the scientific projected risks include:

• Extreme precipitation events (rain and storms) will become more intense and frequent in many regions.

• Ocean will continue to warm and acidify, and global mean sea level will rise.

In brief, without urgent action, climate change will amplify existing risks and create new risks. Unfortunately, risks are unequally distributed and are generally greater for disadvantaged people and communities in countries at all levels of development.

Can you talk about the Paris Climate accords, what it was, its success and failures?

The signing of the Paris agreement represents important progress that sent a signal that the time has come to keep fossil fuels in the ground. With this agreement, countries agreed to limit global warming to below 2 degrees Celsius, and aim for 1.5 degrees. Though the accord gives hope, it still leaves far too many people exposed to the violence of rising seas, stronger storms and deeper drought. It leaves too many loopholes to avoid serious action.

For instance, achieving the 1.5°C goal means an immediate halt to burning fossil fuels pre 2030. This is an ambitious target, sure to be missed in the current scenario where big polluters are backsliding on their commitments and the fossil fuel industry is not only expanding, but also blocking the development of renewables, especially in the Global South.

Countries did commit to reduce their emissions, and a mechanism was put in place to review the actions taken by each country in 2023. Countries will have to increase their commitments in 2025 and every five years. However, there are no legally binding targets to cut emissions, contrary to the Kyoto Protocol that had set binding targets for rich countries.

Today youth in Nairobi marched and delivered an open letter to the minister of Environment & Natural Resources with a clear ask: halt all coal plans which are in contradiction with the national commitments in the Paris Agreement and accelerate the development of massive renewable energy potential of the country #SaveLamu #DeCOALonise #endcoal #kenya Learn more @350africa

In your opinion, what can or should be done to mitigate the effects of climate change? What do governments need to do? Are there examples of countries taking positive preventative action? What countries or cities can we look to as examples?

Climate impacts are taking us into uncharted territory while still impacting the most vulnerable people worldwide as climate action by governments remains insufficient to ensure we avoid the worst impacts of the climate crisis.

All subsidies for fossil fuel companies need to be ended, and the growing renewable energy industry should be supported. Existing fossil fuel infrastructure must be phased out and new plans immediately halted including the building of new power plants and the opening of mines.

The fossil fuel divestment movement continues to be the fastest growing divestment campaign in history. Individuals and institutions worldwide are choosing to take matters in their own hands as governments fail to take bold action to confront the climate crisis and fossil fuel expansion continues at an ever increasing pace. Many cities and regions have already divested. Cape Town has recently announced that they will divest from fossil fuels. Globally USD 5.4 trillion has been divested from fossil fuels.

What campaigns are 350.org currently involved in that you’d like to highlight?

Globally, 350.org uses online campaigns, grassroots organising and mass public actions to oppose fossil fuel industries. Back here at home, in Kenya together with frontline communities we’re campaigning against new coal expansion such as the iconic Save Lamu Campaign. In South Africa we continue to work with the City of Cape Town in the implementation of their divestment commitments as well as aiding university divestment calls. We are instrumental in connecting regional anti coal struggles across the continent.

How can folks get involved in helping to fight climate change?

By getting active in their own communities, fighting for the climate change causes that they are passionate about. This could be air pollutions laws, or getting an institution in their community to divest from fossil fuels. 350.org has a range of tools to help anyone get active, and you can sign up for events and activities on our website and meet others who are active in your community.