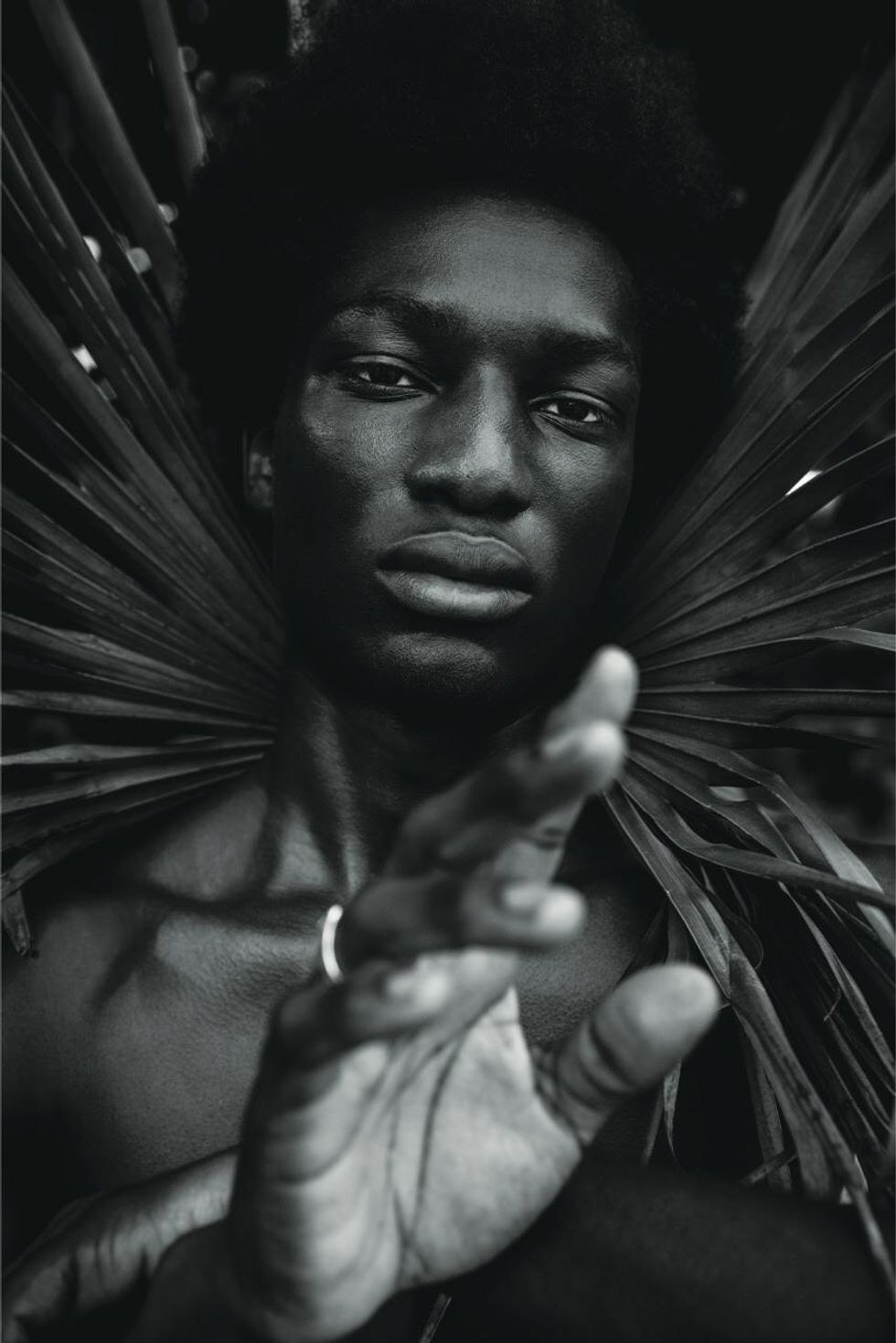 The Ivorian-Ghanaian former model refuses the fashion industry to put him in a box—and he wants his work to reflect that.

A few months ago, Comoe Josué, a Paris-based model and painter, posted his art on Twitter with hopes that he will get the opportunity to get his first show in an art gallery. The post went viral and a few weeks later, his artwork was exhibited at the prestigious Palais des Arts in Marseille, France.

Josué is not your ordinary painter—he's an art school drop out who started painting 4 months ago and works on and off as a model for the past few years. "My work as a model cannot exist without [my] work as a painter," he says, "but my art will exist with or without modeling." Because he left art school, his formal training was minimal. As a self taught artist, technique doesn't really matter to him. Before he began to paint, he says he needed mature and to live his life as a black man—as a man full stop—so that he would get enough experience to create and express his most intimate feelings.

"I left art school because of the racial harassment I went through there. It just made the angst I felt even worse," he explains. "Education has always had a negative impact on me. I was miserable there but I decided to stick it out and endure it longer. I put so much pressure on myself, believing that I needed a degree at all costs."

Being of Ivorian and Ghanaian descent has incredibly influenced his art. His self portrait entitled, The Sacrificial Son, is a direct reference to QueenAbla Pokou's sacrificed son. Abla Pokou led the Baoulé people from Ghana to Ivory Coast around 1770. "I was the first one of my siblings to move to France," Josué says. "It was pretty difficult, so I mentioned it in my painting as a sacrifice."

"The Prayer" by Comoe Josué. Image courtesy of the artist.

When Josué was 16, he got scouted inside a shop during Paris Fashion week. After his first fashion show, a photographer took a couple of pictures and sent them to a modeling agency which signed him. His hair was shaved, he had the "right look" as a dark skinned model and his career kicked off quickly. He then stopped modeling at 19 before resuming his career last year. This time, he had an afro and realized his career has come to an halt because of was racism and colorism. He noted most models wearing an afro in the industry are light skinned.

Fashion has a very insidious way of pressuring models to change their looks to "fit in." No one would say openly that he looked "too black" but he has been struggling to book modeling gigs. "When I work, people try to make my hair "thinner" or to hide it," Josué says. "It feels like they want me, but not who I truly am, nor my hair." He knows his career could get a boost if he moves to an English speaking country. "I genuinely believe I would be given a chance. Most black models who are working right now live either in London or NYC."

He never had the chance to express himself through his art as a model, and no one ever gave him the opportunity to be something else, other than a model. But it is a job that did inspire him, because he saw and analyzed so much about how beauty standards are created and then destroyed.

"There is such a big difference between them: painting means that I have complete creative control and freedom over myself and what I produce," he explains. "Modeling, on the other hand—I never really see myself there. Making self-portraits is a way to re-appropriate myself, a way to tell the fashion world that I am not who they want me to become. A token. A gimmick. It's my way to give Josué, the model, a soul."

He is not afraid of the many pitfalls that exist for young artists. Josué is aware that there's a part of him that want to get his revenge over an industry that ruled him out and never accepted him for who he was. However, in the end, he is confident: "I have faith in my art, even with the obstacles I have met."