In Conversation with Laolu Senbanjo on Damien Hirst and Cultural Appropriation 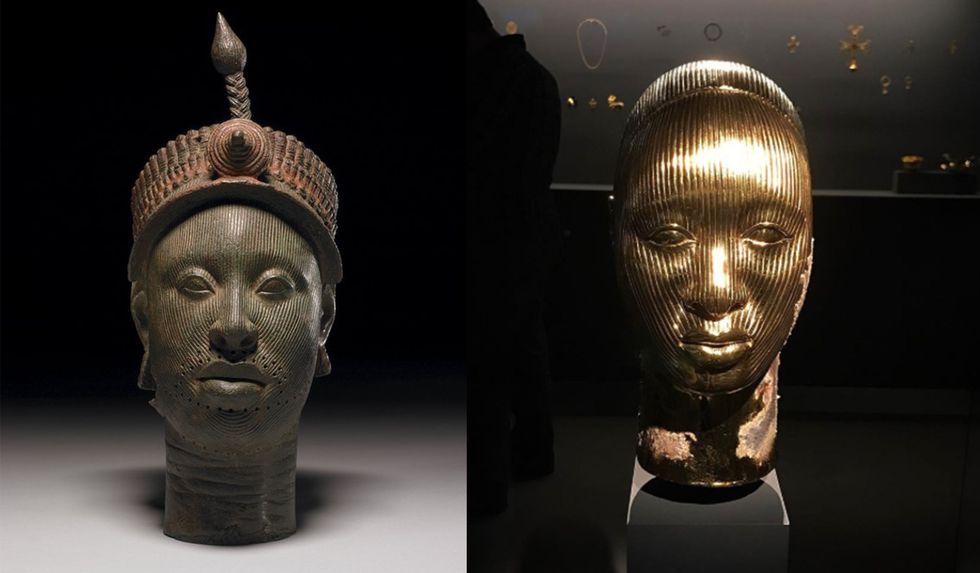 We follow up exclusively with Laolu Senbanjo on his open letter to Damien Hirst, who is accused of appropriating Ife bronze heads.

DIASPORA—Nigerian visual artist, Laolu Senbanjo, shared with OkayAfrica an open letter yesterday as a response to British artist, Damien Hirst, calling him out for copying and appropriating Nigerian art in his latest exhibition currently on view at the Venice Biennale.

Since the uproar from earlier this week, Hirst’s curator ElenaGeunaspoke with CNN to clarify the matter.

"The exhibition features two types of captions: the label inside the cabinet, which is part of the artwork and the leaflet, describing the works in the show," Geuna tells CNN. "Both captions contain a reference to the Ife heads...One of the sources of inspiration for the exhibition is the collection of the British Museum, in London, where the Ife heads are displayed. An Ife head from the British Museum collection has also been included in the famous book, 'A History of the World in 100 Objects' by the former museum director Neil MacGregor."

But for Senbanjo, the offense goes beyond the words of the caption that were given to us at face value.

We caught up with Senbanjo for an exclusive Q&A to follow up on his letter, as well as to get his thoughts on what cultural appropriation is, what lessons can be learned and more. Take a look at our conversation below.

OkayAfrica: When you hear the phrase, ‘cultural appropriation,’ what does that mean to you?

Laolu Senbanjo: Cultural appropriation is when, in this particular case, an artist took a culture, took something very symbolic to a culture and the person profiting off that culture, the person doesn't make any reference, or say where he or she got the inspiration from, there’s no reference whatsoever. The person is passing it off as their original work. And in a lot of cases, when the original artist comes up with this kind of work, in the past they were criticized and called all sorts of names. But now, some other famous rich artist now takes the same work and is passing it off as his and everyone is calling it brilliant. So, I think that’s cultural appropriation because the person is taking something that’s not his and that’s demeaning. It’s just out right unfair. I don’t even have the words because I’m really upset about it.

And just looking at some of the images from his exhibition and just seeing the way he’s just taking other people’s work and erasing the stories and putting some fictitious stories about what he’s doing, when this particular artwork has a lot of symbolic meaning to Yoruba people. Where I’m from, it has a lot of cultural significance. What he took is the Ori Olokun, it’s something that Yoruba people use as a right of passage in Ile Ife and it’s deeply connected. Ori means the head and Olokun is from the river, from the ocean. For him to take all that and erase it, and put that in the world.

He’s in a position with so much influence, so much power and wealth, so a lot of people seeing this for the first time will never ever think about the origins.

OkayAfrica: We noticed you posted the description that accompanied Hirst’s piece and some of the reactions we saw to your open letter took the same photo to say he did indeed give due credit. Where did he go wrong with that?

LS: In reference to the phrase, “may be a copy,” when you look at the original versus Hirst’s piece, it's pretty much a carbon copy, there’s literally no difference, if he improved it, if he added things to it, then we could say he was inspired but he wasn’t. He literally copied the original.

In reference to Frobenius and his “discovery,” that’s utter rubbish. Why would he quote this racist motherfucker who came to Africa, came to Nigeria to steal all these artifacts that have yet to be returned? He quoted a guy who was openly racist, who called us degenerates. That reference from Frobenius is from a longer account, where he wrote he said couldn’t believe that we are the custodians of such beauty. When you say such things like that you open the floodgates, you justify the fact that it’s okay for people to come and plunder, for people to come and steal culture. For Hirst to use Frobenius, he’s supporting that and that is what he stands for. As far as I’m concerned that makes Hirst racist and all curators that were involved in that exhibition racists, because why would they let that kind of thing slide without doing proper research? For an exhibition of that magnitude, he could have allocated funds to research about the history of the people, travel to Nigeria to talk to Yoruba scholars of art and culture. Instead of just giving proper due credit to the craftsmanship and genius of our forefathers, he’s instead saying that it’s attributed to the lost city of Atlantis—fiction.

We, who are artists from Africa, we’re trying so hard, we have been sidelined for too long. People like him have the upper hand—he’s a white male, he's privileged—they dominate this industry that we're in. For them to come and steal from us again, it’s just unfair.

OkayAfrica: For you, it’s a lot more complicated and there’s a bigger picture here. It’s not really about the fact that he quoted “history,” the issue is he used former colonial masters’ history as a reference to something that's very sacred to people. Especially regarding Frobenius being problematic.

LS: It’s very problematic. You don’t just do that in the times we’re in. As an artist, we should be careful. He’s got a voice and it’s huge. Look at the postcard [on his piece] at the exhibition. There was no reference.

OkayAfrica: What are lessons that people can learn or understand about this issue?

LS: I don’t think he thought this through before carrying this out. I’ve been doing a lot of research and I’ve seen that he’s been sued in the past for lifting other people’s work. This is not the first time he’s done this. I think the lesson we can learn from this is that we live in an age where artists have to be responsible, and there’s nothing you can do that you can’t do in hiding. A lot of the Nigerian artists who are at Venice Biennale were very, very angry. Call a genius a genius, give craftsmanship its due credit.

I’m also tired of people who see Africa as a business, they don't care if they understand or don’t understand us, all they see is money.

I worked with Beyoncé on Lemonade, and there’s this appreciation of culture. She could’ve just hired someone else to imitate what I did, but she didn’t do that. When I met her she gave me all the respect and all the freedom to do what I do. My name is actually on that—she actually gave me credit. She understands culture. My art reminded her of her Creole origins, there's something about her culture that she wanted to represent and my art fit into what she wanted. She allowed artists to be creative. That is cultural appreciation, not cultural appropriation.

As an african, my culture is everything—so it’s just crazy when people see it as a commodity. And that is what Hirst did—he just sees this for monetary gain. He doesn't care.