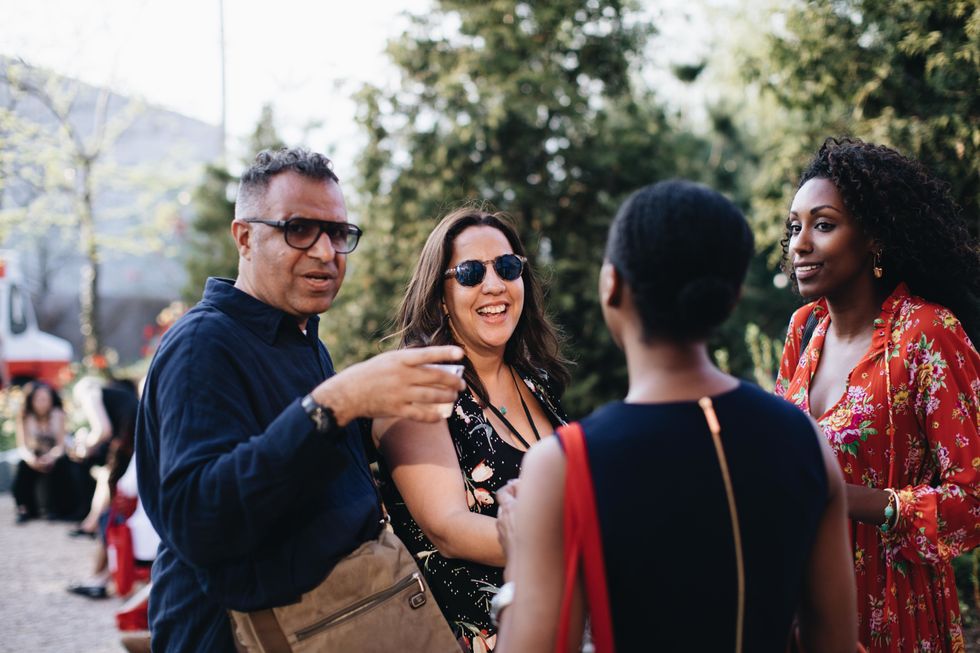 Touria El Glaoui at the 1-54 2018 preview. Photo by Katrina Sorrentino, courtesy of SUTTON.

We catch up with director of the 1-54 Contemporary African Art Fair, Touria El Glaoui , whose New York edition launched this week.

Since the first edition of 1-54 Contemporary African Art Fair took place in London in 2013, a lot has happened with the fair. New York followed in 2014 as an additional venue, and Morocco became the first African country where the fair was held this year.

What remains the same is the focus on the 54 countries of the continent, to which the name refers, and the goal of promoting a global dialogue and exchange from an African perspective.

Touria El Glaoui, founder and director, uses the fourth edition of the New York Fair as an opportunity to draw an interim conclusion that sets 1-54 as a model in constant transformation.

Read more in our conversation below.

Ann Mbuti for OkayAfrica: 2018 has been the first year in which 1-54 had an edition in an African country. Why now?

Touria El Glaoui: Our goal from the very start was to have a physical presence on the African continent and create direct channels of exchange between Africa, Europe and North America. Having created a global platform and steadily strengthened our position in London and New York, we wanted to use this momentum to bring the focus back to the continent. Morocco has an extensive art and cultural history, and through its trade has been a link between the African continent and Europe. In some way by having the fair across continents we also serve as a connector. There are many reasons we chose to situate ourselves in Marrakech. One of them being that in the past year there have been more Africa-centered initiatives in Marrakech such as the opening of art institutions (MACAAL), and a significant growth in Morocco's contemporary art scene in general. We wanted to be a part of that development and introduce galleries and collectors to this budding market.

What were the main conclusions you drew from there?

Marrakech is absolutely alive. It is a city that values its traditional culture and heritage, where one can vividly see the present in dialogue with the past. There are renowned Moroccan artists many of whom use traditional dry mediums, however through the contemporary turn we have seen a surge of new media and multi-disciplinary artists using performance, photography, sound, installation and film. There is so much vibrancy and enthusiasm emanating from practitioners, institutions, patrons and audiences. With new initiatives such as galleries and institutions finding form there are opportunities for tremendous growth as well as space for new discussions to be nurtured. I am eager to see how the contemporary art scene is going to progress and the visual languages that will emerge from a country that already has such a rich culture and history.

Did the experience of the Marrakesh edition influence the NY edition starting this weekend?

Every edition provides us with an opportunity to learn and be inspired, therefore we revise our practices accordingly. We are in constant search of more effective and innovative ways to produce the fair so as to provide a valuable experience for exhibitors and audiences.

You were quoted in an article saying that people are still surprised how vivid the contemporary art scene in African countries is. How would you describe 1-54's role in changing that?

Yes, how could there be a single image of 'contemporary African art' when we are speaking about a continent of 54 countries each with their own infrastructures, politics, socioeconomic conditions, languages, cultures and so on. 1-54 is a part of a wider collective effort to highlight the innumerable voices that make up the contemporary art scene of Africa and its diaspora. By dedicating the platform to such practitioners and their stories we remind audiences that the image of 'contemporary African art' is not static, it is constantly evolving. This is why we have a rigorous exhibitor selection process headed by the selection committee to ensure that with each edition there is a deeper nuancing of perspectives. We also have the Special Projects and FORUM talks program which promote innovative and critical artistic and thinking practices.

Are there differences depending where the fair is held?

There are, and we try to use these differences to make each iteration a unique experience. The fair is tailored to each site and responds to the architecture of the space, the local art communities and the more-subtle social dynamics of that particular environment. Our extended public program of off-site events is one of the ways in which we tap into the wider art scene and public. We strive by all means to forge meaningful and sustainable relationships in each space while retaining the 1-54 voice and objectives. With some returning exhibitors there will always be a sense of familiarity, but the content creates a new level of engagement that cannot be duplicated.

Major art fairs like the Armory Show or Art Basel are rethinking their concepts, they offer more supporting program, downsize, etc. What is next for 1-54?

We see 1-54 as a model in constant transformation. We would like to further build on the three iterations and form a global network with more opportunities for collaboration throughout the year. Our goal is to work towards a future, wherein global African identities are unhindered by cultural and political hegemonies and are wholly valued as agents in contemporary arenas of knowledge sharing, art and cultural production, the marketplace and global industries.