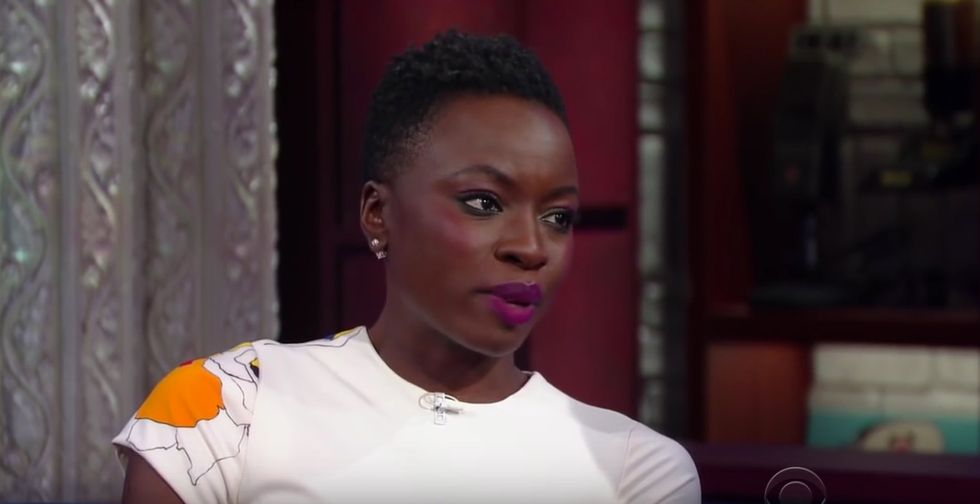 But first, Colbert had plenty of zombie-related questions for The Walking Dead star. Like, if she needed to survive a zombie apocalypse IRL, would she rather do it where she was born, in Iowa, or Zimbabwe, where she moved to when she was five? (Grinnell, Iowa, was the winner here)

As Colbert pointed out, the thing about The Walking Dead is it’s not really about a zombie apocalypse–it’s about the human condition, with a backdrop of a zombie apocalypse. The Late Show host wondered what that says about the human condition, the fact that “the idea that your friends can turn on you at any minute, and you have to kill them” is such a popular thing in our culture.

Gurira’s response was nothing short of brilliant, and even referenced the great Fela Kuti and one of our all-time favorite songs.

The term ‘zombie’ and what it means sometimes has to do with societal conditioning, are we zombies at times? Are we being conventional in how we respond to things? Are we using our own minds? Or are we being programmed in how we live? Like the song Fela wrote called ‘Zombie’ back in the day… The idea of that, of them seeing people actually lose their consciousness, their minds, but still functioning like human beings, I think it’s something that parallels how we can function in society at times, and so maybe that is something sparking an idea in people’s minds as they watch the show.

As of this week, the actor and playwright has two plays running concurrently on and off Broadway: the Liberian civil war drama Eclipsed, and Familiar, which although fictitious, was very much inspired by its writer's own family and experience as a Zimbabwean-American.

“It’s pretty surreal,” Gurira says about her New York theater district takeover. “Last night I was in [Familiar], I was in Eclipsed, and Familiar was running three streets away at the same time, and it hit me how special this moment is.”

“There have been plays in the past with all women casts and playwrights, but not with a director as well. So the combination of Liesl Tommy helming it, and then myself writing it, that’s kind of thing that’s really special about it,” Gurira says.

Eclipsed opens March 6 at the Golden Theatre. Find out more about the show's 10,000 Girls Campaign here.

And in even more recent news...

It’s been an honor to work so closely with @lupitanyongo on @Eclipsedbway. Her passion and talent is inspiring! You can read this feature in the latest @entertainmentweekly