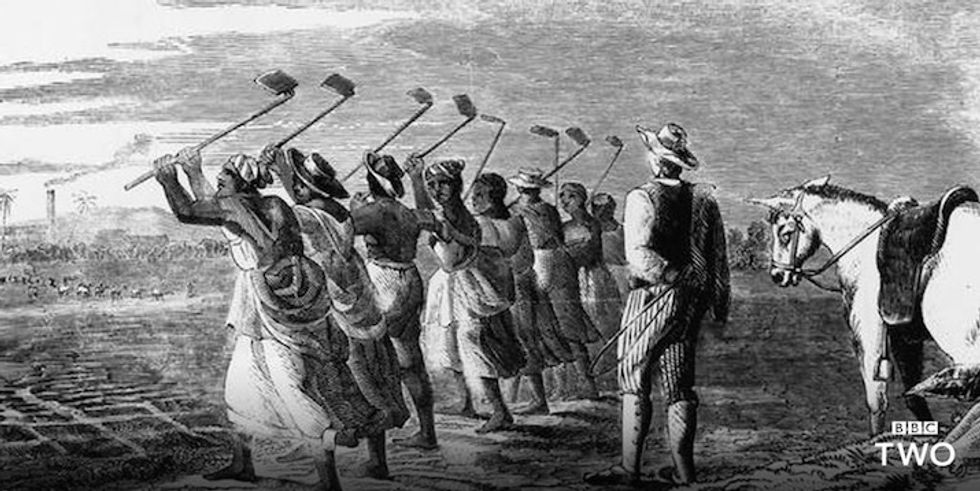 Last week, the first installment of British-Nigerian historian David Olusoga's 2-part Britain's Forgotten Slave Owners was broadcast on BBC Two and reopened the dialogue on this country's shameful legacy. The show drew in 1.6 million viewers, and the hashtag #BritainsForgottenSlaveOwners trended in the top 5 in the UK on Twitter. Users voiced their shock and disbelief at the sheer scale of Britain's participation in the transatlantic slave trade. Why were these people shocked? When thinking of slavery the British imagination tends to conjure up images of expansive plantation houses and cotton fields in the West Indies and America like those depicted in 12 Years a Slave. Never do the ports of Bristol and Liverpool, through which black bodies where shipped en mass like livestock, come to mind. Britain's role in the trade may have been swept under a carpet up until now, but Britain's Forgotten Slave Owners uses research gathered in a project with University College London to uncover the true scale of slave ownership and involvement in the trade.

It seems that Britain is distancing itself from its brutal past. The topic has been glossed over in a national curriculum that offers a sanitised version of history. As it stands, Britain's role in the transatlantic slave trade is a statutory subject that's been far removed from the British conscience– it isn't compulsory to be taught in schools, therefore classes focus more on the atrocities that happened in the U.S. Unlike the U.S., which is pockmarked with abandoned plantations and decaying sugar refineries, the UK has few looming reminders of its dark heritage.

There are, however, a number of inconspicuous hints of Britain's ties to the trade, ranging from streets named after former colonies and slave-owning families to entire institutions founded off the funds of slavers. In Plymouth stands a commemorative statue of John Hawkins, former mayor of Plymouth, who is credited as the first Englishman to engage in the transatlantic slave trade. Slave owner Thomas Parr financed Liverpool's Royal Institution, a forerunner of Liverpool University. Bristol's Edward Colston used wealth gained from the Royal African Company and their engagement in slavery to build schools, churches and the city's main music venue, which bears his name. The reality is that modern Britain owes much to gains made from a slave trade that was deeply embedded in British society. Money from slavery was channeled into education and the arts, and partly funded the industrial boom. Britain became great off the sweat of the enslaved.

Parliament passed the Abolition of the Slave Trade Act in 1807, but it wasn't until 1838 that slaves in the colonies were freed. Even after they where formally freed many were forced to work unpaid apprenticeships for another four years. The documentary reveals how after the abolition, 46,000 of Britain's slave-owning families were paid today's equivalent of £17b from taxpayers money to compensate them for the loss of their property– a stark contrast to the zero pounds and zero pence of reparations to victims of slavery and their descendants. Until the recession and bank bailouts in 2009 this was the greatest bailout in British history. Many claimants reinvested the compensation money and grew rich. The transatlantic slave trade might be long dead, but some descendants of Britain's 46,000 slave owners are continuing to benefit to this day. The country estates and Georgian town houses these 'old money' people occupy were built off the proceeds of barbarity.

And what about the descendants of slaves? Well, little has been done to address the generational trauma. The nearest the British government has ever come to a formal apology was in 2006 when the Prime Minister at the time, Tony Blair, expressed his “sorrow" but fell short of an apology. Blair's statement failed to echo anything further than liberal white guilt.

Meanwhile, a number of painful, dehumanising stereotypes stemming from the times of slavery are still very much alive today. Consider how world class athlete Serena Williams has been likened to a gorilla. The thinking applied here is the same that was used to justify the subjugation and enslavement of blacks. Nowadays this thinking is used to justify institutional racism, bigotry and police brutality. Slavery is made out to be something that should be forgotten, for black people to move on from. Many years may have passed but clearly the legacy of slavery is still alive. Until ignorance is shed, Britain comes face-to-face with its murderous past and reparations are truly considered, we can't even begin to think about forgiving or forgetting Britain's part in the slave trade.

Episode 2 of 'Britain's Forgotten Slave Owners' airs Wednesday, 22 July, on BBC Two. For those in the UK, episode 1 is available to watch via BBC iPlayer.