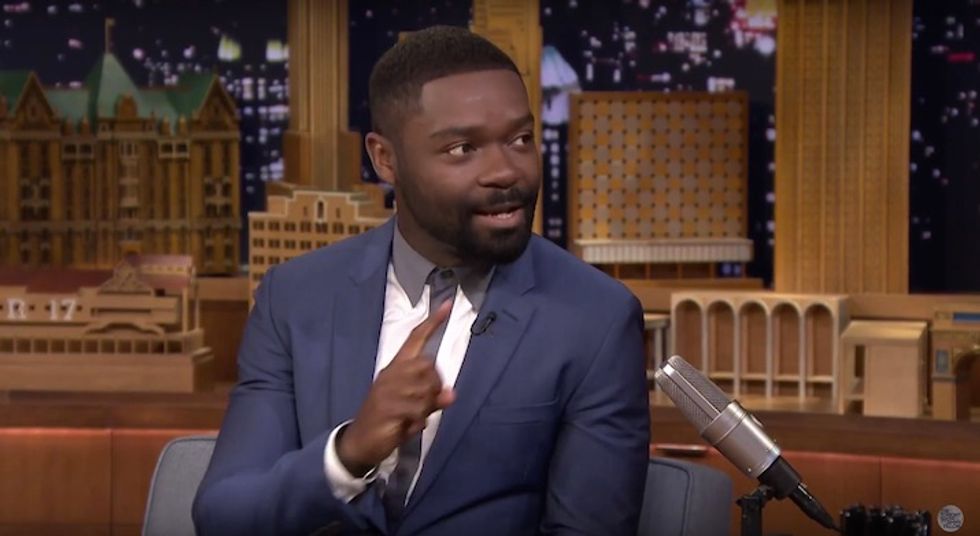 David Oyelowo's Nigerian father made his debut on 'The Tonight Show' with a pair of standing ovations.

The last time David Oyelowo was on The Tonight Show he shared a hilarious story about how his Nigerian father gets everyone's name wrong, including "Op-er-ah Win-eh-frey" and "Stephen Speel-burgah." The bit ended with Fallon saying he'd love to meet the British actor's dad next time he's on the show, which Oyelowo assured he could arrange.

Last night, the Golden Globe-nominated Selma star and new voice of James Bond followed through on his promise– and from the looks of it, Stephen Oyelowo loved every minute of it, even taking a pair of standing ovations from the audience.

In May, the younger Oyelowo shed further light on his father and the family's Yoruba heritage in an interview with NPR Fresh Air's Terry Gross:

"My dad has tribal marks on his cheeks, he has four gashes in each cheek, which is very much part of the Yoruba tribe. ... If anyone messed with me at school, my dad would say, 'Tell them — look, see these marks on my face? I fought with a tiger, so they don't want to touch my son.' So I believed for years that my dad had wrestled a tiger, which is why he had these marks on his cheeks. So, of course, at some point I realized that that was a load of bologna so when he was then saying that we were from a royal family I was like, 'Yeah, whatever.' But then we shipped up in Nigeria and we lived on Oyelowo Street, named after my family, and we lived on the Oyelowo Compound. ... It was a very bizarre cultural thing to adapt to, going back."