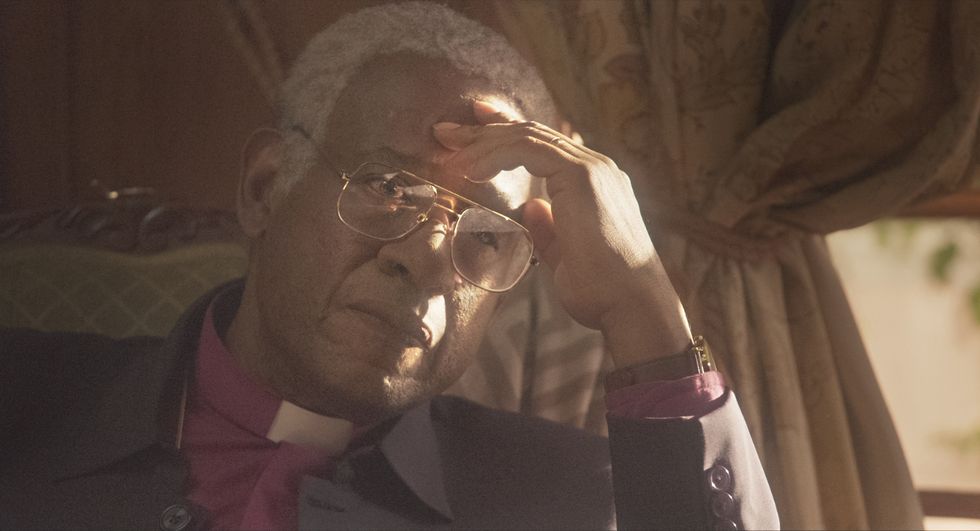 Forest Whitaker as Desmond Tutu in the thriller film 'The Forgiven,' a Saban Films release. Photo courtesy of Saban Films.

We speak with Mpho Tutu, the daughter of Desmond Tutu, on the new film 'The Forgiven'—in theaters now.

The Forgiven, an intense thriller based on the real events from South Africa's Truth and Reconciliation Commission, opened in theaters everywhere this past weekend. Academy Award winner Forest Whitaker transformed into an African great and anti-apartheid activist Archbishop Desmond Tutu in the film, chronicling a trying time for South Africans as the county began to move forward while gaining justice for those who were greatly impacted by apartheid.

Directed by Roland Joffé (The Killing Fields, The Mission) and alongside Eric Bana, here's the synopsis:

In 'The Forgiven,' when Archbishop Desmond Tutu (Forest Whitaker) is appointed to head a nationwide investigation, he's summoned to a maximum-security prison by a notorious murderer seeking clemency (Eric Bana). Inside the brutal prison walls, Tutu is drawn into a dangerous, life-changing battle with the cunning criminal.

The Truth and Reconciliation Commission not only was an intense period of time for the country, but for Tutu's family as well. Mpho Tutu, Desmond Tutu's daughter, gives us more insight on what that time was like for her and her family, as well as how revisiting the TRC can still be a reliable source of hope for South Africans to continue to move forward today.

Antoinette Isama for OkayAfrica: What was your family's involvement with this film?

Mpho Tutu: My father said he thought it was a work of art, that it wasn't something that required his permission; that he appreciates being asked in any case. That was the largest part of the family involvement. We did research the script beforehand and it was clear that the story was based on the experience of the Truth and Reconciliation Commission. And it was also clear that although my father loomed large in the story, the story really was about the people of South Africa who had the courage to get involved or be engaged in that truth reconciliation process. And who had the courage to forgive.

How old were you during the commission? Were you young?

While your father was involved with the commission, did he share with you his experiences? What was it like hearing his stories while he was going through the commission?

I was, for much of the period of the commission, living in the U.S., and I went back to South Africa a few times and attended some of the hearings. I also spoke with my father afterwards and with my mother. And it was a really difficult period—it was a wrenching experience. He wrote about it afterwards in the book No Future Without Forgiveness and we wrote about his experience together in two subsequent books. It was, both mentally and physically, a really grueling experience.

What was it like seeing your parents be portrayed on the big screen?

Initially it was a little jarring, because there were things that I noticed that were, you know, like "these aren't my parents," but there were also some things that were, you know, "wow, you completed nailed it" either in a facial expression or the way of holding your hands or something like that, but I think for me, what came through was that although Forrest Whitaker portraying my dad had the starring role, the real stars of the show were the ordinary South Africans whose stories were part of that film.

It was just interesting for me to see the film, knowing that South Africa is in a state of transition politically, especially with Ramaphosa being the new president. Do you think there's anything South Africans can still learn from looking back at that time—in terms of how to continue to move forward as a country?

It's not the compartmentalized history where one racial group says, "Well, this is what happened" and the other racial group says, "No, well, this is actually what happened." We have a common history, we have all had the opportunity to see, the devastation that apartheid brought. Now, where we go from common history to moving forward together? That may be a slightly different story. But at the least we know we have the capacity to move forward together, even if we don't always have the will.

For those who will be seeing this film and this will be their first time learning about the TRC, what is one thing that you'd like them to take away from the film?

Can I have two things?

What I would like them to take away from the film is the recognition that no person is beyond redemption, and that no person is unforgivable. And maybe those two—yeah, they're big enough to chew on for a while.