Writing the Future: 9 Black Sci-Fi and Fantasy Novels That Will Take You Out of This World 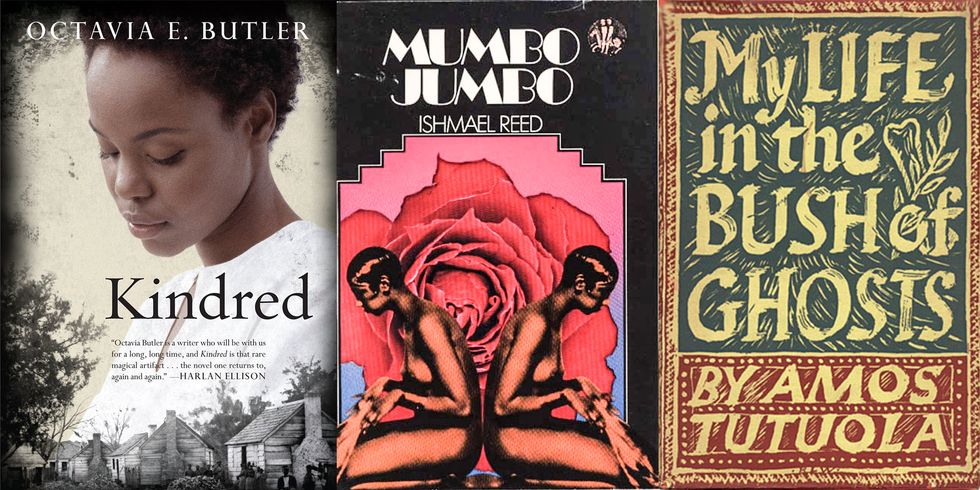 For our diaspora book club, we look at 9 black sci-fi and fantasy titles that have influenced afrofuturism.

Ask anyone who's ever read Octavia Butler'sKindred and we're sure they can vividly recall stepping into its surreal, time-traveling world. It accomplishes what all good science-fiction does: it transports the reader somewhere different, somewhere outside of the ordinary. While the fantasy and sci-fi genres are often seen as reserved for white males, there have been several Black writers who have followed in Butler's footsteps to produce classic works within the genre. From N K Jemisin with her celebrated Inheritance Trilogy to novels from the multiple Hugo award-winning Nigerian author Nnedi Okorafor, writers from Africa and the diaspora, have consistently crafted some of the most illuminating and visionary works in the literary space.

Perhaps ironically, while the genre is often centered on alternate realities, the work of many Black sci-fi and fantasy writers focuses on creating fictional worlds with diverse characters that encourage readers to think critically about our actual realities. They do so often, by providing social commentary that resonates with reader through imaginative delivery.

In the spirit of afrofutrurism, a cultural practice which imagines Black people living full lives with agency in both the present and future, the following list provides rich examples of Black people literally writing their own futures, and maintaining control over narratives both real and fictitious.

From earlier works of fiction, to more contemporary titles, below are nine Black sci-fi and fantasy novels that will carry you to another dimension.

Who Fears Death by Nnedi Okorafor

Okorafor is one of the foremost black fantasy novelists in contemporary literature. In Who Fears Death, the author tells the story of Onyesonwu, an ostracized, multiracial child born with special powers, given to her as a result of the circumstances of her birth. She was born to a victim of rape and, thus, expected to live a troubling life by those in her community. The story follows her journey as she discovers the length of her magical abilities and finds that a powerful entity is looking to kill her. It was recently announced that this novel will be adapted into and HBO series, executive produced by George R.R. Martin.

In his "experimental," 1972 novel—set in 20th century Harlem—Reed offers a satirical examination of race relations in a fictional world, where populations of black people are being "infected" with a mysterious "disease" called Jes Grew. The condition forces them to groove and dance uncontrollably, which causes great alarm amongst white populations. Evil, anti-Jes Grew forces try desperately to end the spread of the "disease," as its spellbinding effects pose an unprecedented threat to their dominance.

This classic 1979 novel, follows Dana as she travels back and forth between present day and the Antebellum South. Butler effortlessly parallels the racial tensions of the past and present day, as the character explores, first-hand, the history of slavery in the United States. She discovers more about herself and her familial history in the process. Kindred is Butler's seminal work, but, really, you should try and read as many of her books as possible.

Dark Matter: A Century of Speculative Fiction from the African Diaspora, edited by Sharee Thomas

This anthology is great introduction to the world of black magical realism. It's a collection of fantasy, horror and sci-fi prose written by black intellectuals like W.E.B Du Bois—whose short story The Comet, is one of the book's standouts—and some of the biggest names in the genre, including Nisi Shawl, Ishmael Reed, Octavia Butler and more.

Brown Girl In the Ring by Nalo Hopkins

In this 1998 "urban fantasy" novel, Jamaican-Canadian writer, Nalo Hopkins, imagines a futuristic, dystopian version of downtown Toronto, where poverty and crime are rampant. The city is under the control of a drug-lord named Rudy and the heroes of the story are a young Black woman named Ti-Jeanne and her grandmother who use magic and herbal spells to help solve the city's many social ills.

My Life in the Bush of Ghosts by Amos Tutuola

This 1954 novel by Amos Tutuola—the Nigerian author of The Palm Wine Drunkard—is a collection of narratives about a young boy who enters the wilderness after being abandoned by his family. During his journey, he comes into contact with various forces and spirits that shape and alter his path. Interesting fact: the debut 1981 album by Brian Eno and David Byrne, is named after the novel, though they admitted to not having read it upon the time of the album's release.

Redemption in Indigo by Karen Lord

In her debut novel, Barbadian writer, Karen Lord pens a humorous, fantastical tale about a woman, who after leaving her gluttonous husband, is granted a magical stick that allows her to control the world's forces. This power makes her the target of a selfish witch doctor who doesn't want these supernatural capabilities to be shared with anyone else. With its rich magical tales, the novel draws on common themes from Senegalese folklore.

The Hundred Thousand Kingdoms is the first book in the celebrated author's The Inheritance Trilogy. The fantasy novel—which won Jemisin the a Locus Award For Best First Novel in 2011—follows protagonist Yeine Darr, who is named heir to the city of Sky. However, she later finds that the city has also been promised to the present ruler's niece and nephew, which causes an intense and often dangerous rivalry between the three characters as they fight for the throne.

Future Land consists of 9 short stories, which take place in a stratified dystopian universe ruled by a greedy elite, and sadly doesn't sound too far off from current realities in some societies. Each story in the anthology offers satirical commentary on a specific social ill—from capitalism, to The War on Drugs to the Prison Industrial Complex, offering news ways to understand such issues.