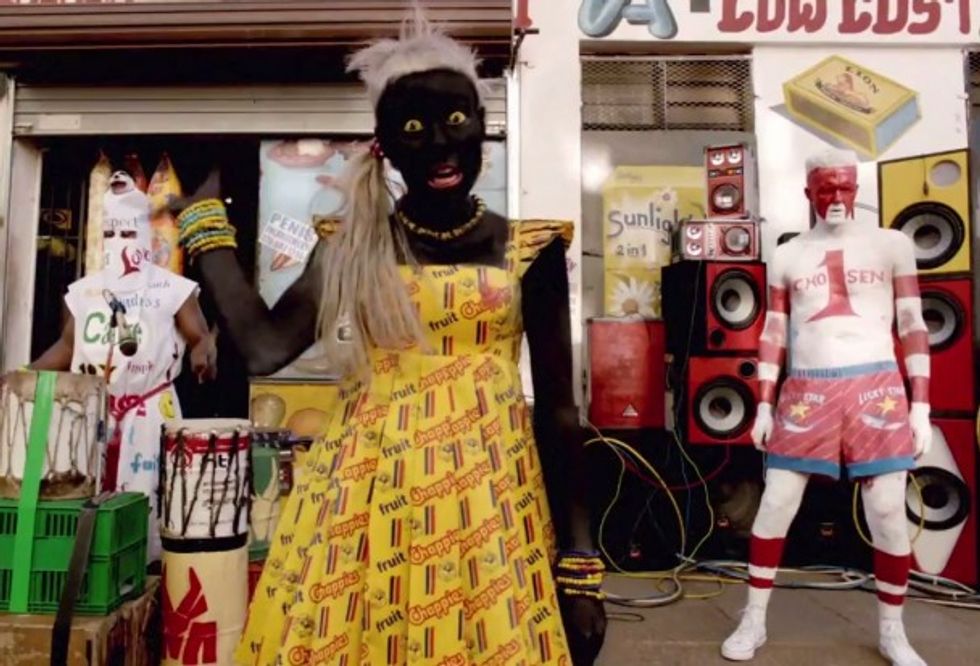 When South African rap/rave duo Die Antwoord released their latest video for "Fatty Boom Boom" from their album TEN$ION yesterday, the Okayplayer office was abuzz (for like 3 minutes) with comments on DA's ever-expanding catalogue of absurdities. Read our opinions on Yolandi's blackface and Lady Gaga's grotesque gyno visit below, then watch the Die Antwoord "Fatty Boom Boom" video at your own discretion.

V: Don't get too close to the screen…wow.

B: Watching now.... is that Nicki Minaj and Akon on the wall sh*tting on the Black Eyed Peas?

A: They always comment on how no one outside of South Africa knows much about the country except for Zulus, Nelson Mandela and Die Antwoord. This could be a comment on that - everything exhibited in hyperbole in typical DA style. But they may have taken the race thing too far, considering how much they've already capitalized on a marginalized culture (they acknowledge it themselves: "GOT A OFFSHORE ACCOUNT FOR DA DOLLAR BILLZ DAT I STACK")

K: To me it's a fairly typical Die Antwoord shock-video centered around misconceptions of SA culture, they're just trying to push things further cause they don't get the amount of play they first received — hence the blackface and prawn abortion (which doesn't have any other purpose than pure shock value as far as I can tell)

K: The Gaga things is she asked them to play with her in SA and they declined calling her a "bad Madonna rehash." (Gaga's playing South Africa late Nov/ early Oct).

B: Does okayplayer even care about Die Antwoord?

V: If they poop on Black Eyed Peas? Yes.

N: Boo to the whole thing. blackface should be outlawed. I think its outrageous for the sake of being outrageous. The story doesn't really mean anything to me and Busta Rhymes old videos were better. Also I don't really dig the song. #opinionofahater #putyourhandswheremyeyescansee

B: I'm in total agreement.

A: Someone just tweeted at Okayafrica: "why are we paying attention to Die Antwoord again?"

I vacillate between admiring their artful achievements (this video aside) and agreeing with @Congogirl's question above.