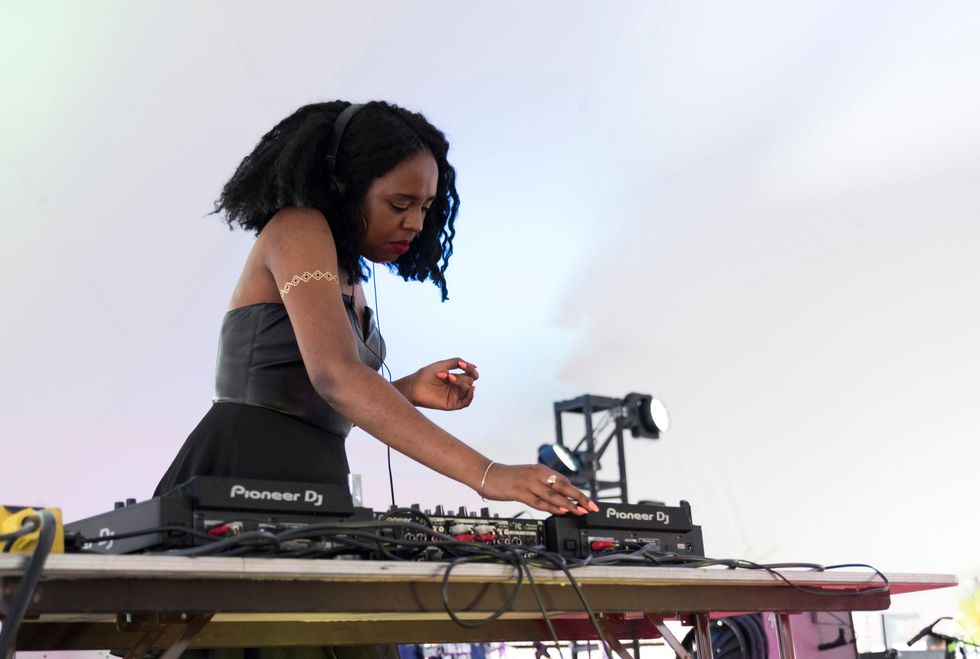 We talk to Boricua-Panameña DJ Bembona about finding her identity through DJing.

DIASPORA—DJ Bembona—also known as Xiomara Marie Henry—felt an immediate connection to the Afro-Latino Festival of New York when she first heard about it three years ago. Soon after, the 26-year-old Boricua-Panameña DJ and activist began to spin professionally. In the process, she also began to explore, in-depth, the connection to her Afro-Latina roots.

Skip ahead to this past weekend at the Bed-Stuy Restoration Plaza and you would have found DJ Bembona assuming the role of house DJ as Afro-Latino artists came and went from the stage. It was her second year at the annual two-day festival, which dedicated its 5th edition to “Women of the Diaspora."

Why is it so important to have the Afro Latino festival in New York City?

The space that they've created for us here on a local scale—Brooklyn, Harlem—and on a broader scale, New York and the nation, is really important. These festivals are really rare, especially for Latinos that identify as black—who know our ancestors came from Africa.

This festival is also a way to bring us even further into the Latino and American mainstream. Because people are so set on what Latino is that they don't really know we come in such a large variety, and I think it's important for people to learn.

How did you come to identify as Afro-Latina?

When I first started DJing, I didn't know what direction I was going. One person that impacted me a lot was Riobamba. I heard one of her mixes before I started—she had political issues mixed to music. It was exactly what I wanted to do. During that journey of exploring these new sounds I was awakened to, 'Who am I? What do I identify as?' I had never identified myself as Afro-Latino before.

What role did DJing play in that process?

I'm really into rhythms—that feeling you get when you start dancing. You can't really explain it in words. It goes back to a spiritual connection that I just feel in my blood. In my soul. This is right. I know this is where I belong—what I am.

What are the kinds of spaces you have created as a DJ and activist?

My monthly party is called Vibras NYC. It's actually a year old this month. It's important for me. I'm black, I'm full Latina, and I'm a woman. It's kind of rare, in the city and abroad, to be that and be a DJ and an artist or musician. I felt like it was important to create a space where I can play music that you don't hear in the club or in the mainstream.

The Latino community still has an awakening to go through. We're still going through that process. And I feel like my space allows that to happen. I would say they the parties are a safe space. Whether you're queer, whether you're black, Latino, or whatever you identify as, if you come to my parties, you will feel at home with one of my sounds.

You recently went to Colombia for your first trip abroad to DJ. How did it go?

I went to Bogotá and Medellín, and spun in each city. They treated me like a queen. I just loved the people there. I did notice some things about race, obviously, coming as a black woman. I definitely stood out, but I never felt like I wasn't a part of their community. It was an amazing experience.

You've also been working with the Fania label, including their Armada Fania series and a mixtape of Fania artists. What has that been like?

That's been a dream I didn't know I had. Fania is my childhood. The salsa genre is one of my favorites. Just to be part of it, honoring my favorite artists, honoring my abuelos and my parents, who raised me on that stuff. I can't believe I did it. I want to be more involved in the future. Because I really think it's important.There are a lot of underground salsa artists in New York and abroad, and they need something like Fania to help bring them out to the public.

What have you been listening to and playing lately?

Afrobeat helps me to have this connection to my roots again that I probably didn't have before I was DJing. I'm also really into Latinx trap right now. Now that they're using the same American sounds, they're creating a bridge between the cultures of Latin America and the US. I think it's powerful. That gets me hype, that gives me energy. Dancehall, too!

Check out DJ Bembona's new residency at Bembe in Brooklyn and her work on the weekly Loca Vibes Radio program. At the end of the month, she will be spinning at El Museo del Barrio as part of Uptown Bounce, an annual summer block party hosted alongside the Museum of the City of New York and El Museo del Barrio. In addition, she will be spinning at an event to commemorate the 70th birthday of Assata Shakur.