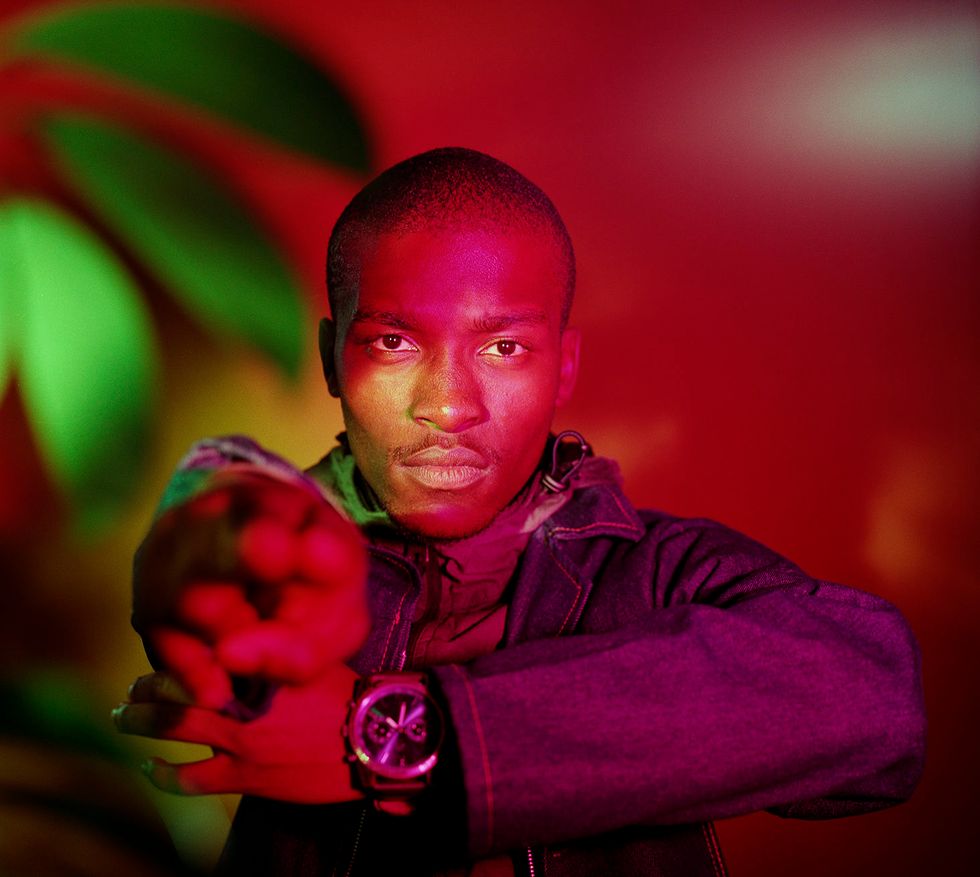 Gqom King DJ Lag is on his way. We speak with the South African producer ahead of his tour of Europe and Asia.

DJ Lag is the poster boy for a genre that until recently has primarily existed in the Durban underground and in the form of low-quality MP3s. This is beginning to change, however. Gqom is emerging from the shadows and into the mainstream.

Locally, Babes Wodumo—the queen of gqom, according to DJ Lag—has blown up, while internationally, labels from London to Rome are picking up on tracks from the likes of AudioBoyz and Rudeboyz.

DJ Lag is about to join their ranks with a self-titled EP for the UK label Goon Club Allstars due out in November. He’s also taking gqom on a tour of Europe and Asia, including a date at Berlin’s famed Berghain.

We caught up with the 21-year-old DJ/producer on the eve of his overseas visit.

What is gqom to you?

It’s a mix of elements from hip-hop and house. We knew that people like to dance a lot so we made something that is vibey. We also wanted to create our own sound.

Do you think you’ve become the figurehead for a genre that can be quite anonymous?

I think so, yeah. It’s an underground element but we’re trying to take it to the mainstream. I’m called “the gqom king”—I feel like it’s my duty to take it to a higher place.

Does that come with a bit of pressure?

I wouldn’t say I feel pressured—I’m just doing my passion. If you’re following your passion you don’t feel much pressure. I’m taking it one step at a time to see where it’s actually heading. So far it’s going proper and we’re just hoping for the best. We’re just working as a team with the rest of the gqom guys—we’re just working as a unit. I don’t feel much pressure—it’s not like I’m on top top top—I’m just on my way.

That’s one of the things I find interesting about gqom: it’s very collaborative and there doesn’t seem to be any beef, like there is in hip-hop, or the rivalries you find in house.

There is beef, just like any other genre, but our beef is not a threatening beef. It’s a positive beef that keeps you going. The beef that we normally have is “who has the best gqom?” That’s the kind of beef—the beef that makes you go back to your crib and work more, you know. “Who released the dopest gqom this month? Who’s chopping the tracks more?”

You said you’re taking it one step at a time and it’s going well. You’re now touring Europe and Asia—how does that feel?

Are there any particular tracks or artists people should be listening out for?

There is: this one track I’ve just released that’s making waves around Durban and when I played it in Cape Town—it’s called “Let’s Do This.” It was created within a Durban vibe—you know, when you’re in a club making those sounds, those noises, shouting, “Let’s do this,” so I had to make a track incorporating this. I’ll mostly be playing my tracks—these tracks will be on an upcoming EP I’m working on. I should just say to people: “brace yourselves—get your dancing shoes ready.”

Who else in Durban is making really good gqom?

Distruction Boyz. They’re doing a great job. They’re not just Durban anymore—they’re doing South Africa as a whole. I’m proud of them—they’re my friends. We came up together and we’re all rising together now. They’ve got this one big track with gqom queen Babes Wodumo. The genre is actually getting on another level now—it’s about time. Back then when we used to play this music people said it’s “too ghetto”—go play it in your own space. Now people appreciate it—even on radio. Things have changed.

She’s the queen. She always rides on gqom music and she always dances to gqom music. That’s why she’s recognized as the gqom queen. One guy who really believes in gqom music is Mampintsha [from Big Nuz]—he’s the one who’s behind Babes Wodumo—he’s the one who’s behind Distruction Boyz. From way back we were just those young boys from the ghetto with a noisy sound. That’s what we used to be called—“the noisy boys.” Back then when you used to play this music people would get irritated, but now everyone goes to the dancefloor.

So is it ever going to be as big as deep house in South Africa?

I used to tell my friends I’m giving gqom music two years to blow up. I believe gqom will be way bigger than deep house. We’re already at that level of deep house and gqom hasn’t begun to spread its wings yet. On radio, deep house is not being played like it was before. The same in the clubs. A dance floor at this time of year becomes messy when gqom music is playing. Even the deep house DJs are playing it—it’s the people’s music. Even Black Coffee is playing gqom music. Yet it hasn’t reached its proper level.

Greg has been writing about African music since the kwaito era and has been published in the Mail & Guardian, Elle, DJ Mag, Boiler Room and many more. He also deejays as DJ Dexterity and consults on digital campaigns. He’s on Twitter as @dexterity.