The Artist Is Present: DJ Spinall Wants to Push Afrobeats to the World, Without Forgetting the Culture 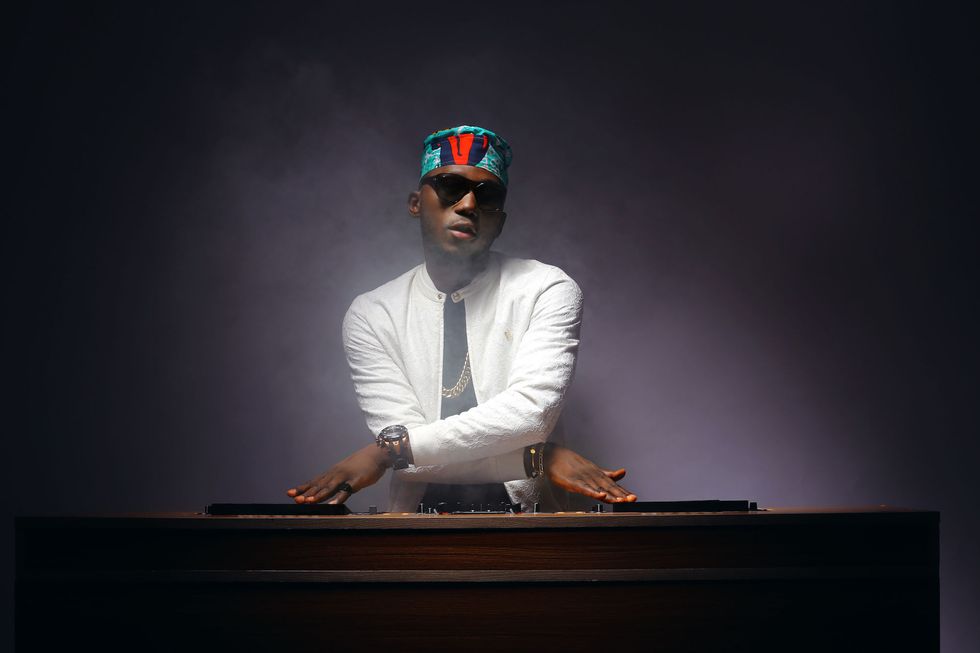 DIASPORA—In our new series, The Artist is Present, we revel in and get to know the minds behind Africa’s creative world in fashion, art, music prose and more. We dive below the surface with African artists to talk about their process and purpose.

In this installment, we link up with multiple award-winning DJ Spinall, one of the main forces pushing afrobeats forward from behind the decks .

We caught up with DJ Spinall during his visit to New York below.

How did you first get into music?

I think how it all really started from high school and a passion for music. It's always been imbued in the way that my parents used to listen to a lot of music, my dad and my mom both. They have thousands of vinyl records. In the morning my dad would wake up, and open the drawers, and start playing some Fela Kuti, Sunny Ade.

As I became a teenager, I started turning my passion into actual music. I didn't know what to do with it at first until I hired a DJ in high school to play for the students. I was just watching him like, "Okay, maybe this is my calling right here."

So, after learning how to DJ, I decided I was gonna constantly upgrade myself, brand myself out and steady pay my dues. I worked at a couple of radio stations, but when people really started paying attention to my sound and to what I do was at a weekly event in Lagos called Industry Nite in Lagos. I was a DJ at Industry Nite for about five years.

Then I started learning how to produce. At first I wasn't producing, I would walk up to a producer and give him my ideas on what I wanted things to sound like, and what I wanted him to do, you know? I discovered that they were not getting it. You cannot keep explaining, you want to just do it yourself, so I started producing and it's been amazing. I started making music, I have two albums to my name, and I'm working on my third album as we speak.

What does the future hold DJ Spinall?

Also, beyond selling my music to Africa, or introducing Africans to the music, I want to introduce the world itself to the music. I'm looking forward to EDM sessions, and sessions in other genres.

Basically, I want to push African music but not leave behind the culture. Because I feel like the culture is what lead to the music.

Basically, I want to push African music but not leave behind the culture. Because I feel like the culture is what lead to the music.

The culture is so important.

Yeah, and a lot of people want to move forward with the music alone, and leave the culture behind. You can't do that. You have to carry it because the music, the lyrics and everything we talk about comes from who we are.

Who we are is an essential part of our everyday life. Building relations, going to parties, dressing up, talking about African women, politics, the food—why I wear a cap—these things all lead into the music.

I want to push that; I don't want to drop anything behind while pushing the music. I want to bring all that forward and, you know, introduce the world to different things. I mean, the world has opened up to Asian foods, and everybody eats Chinese food. why not Nigerian food? Why not jollof?

You want the world to get to know Africa.

I don't want the world to just listen to our music, but get to know our people. Get to know the good along with the bad. I think, over time, people have only seen the wrong stories about Africa. I'd be really glad if I'm able to contribute my little quota into selling the right image, that exact true perspective of Africa to the world at large.

Your album Ten has a lot of star collaborations—Mr Eazi, Davido, Ice Prince, and more—how did those come about?

I think that's where the old question of why I'm making music comes into play. I'm a DJ, I can tell what the people would like based on the experiences I've had behind the decks. So when I make beat, I have different folks in mind that I know: this is your sound.

Sometimes I break the rules. Sometimes I don't give you the conventional beat. For instance, Mr Eazi didn't like the beat I gave him for "Ohema" at first.

When I sent him the beat, he was like, "Yo, Spinall man, can you play me something else?" But the second time we got together in the studio, some time afterward, I played the beat for him again and he was like, "Is this the beat?," I'm like, "Yeah, it's the same beat!" He jumped on it, and in less than a minute the song was ready. He just went in and just killed one time. So I think that there really no rules to making your music.

Mr Eazi didn't like the beat I gave him for "Ohema" at first.
Well, when you want to be creative in life, you can sit down based off rules. Because rules will butter up your creativity, but if you really want to stand out you have to break the rules—put an artist on a different sound that they're not used to, and that was what we did with "Ohema." It wasn't like that typical slow song, slow vibe, you know?

What about "Olowo" with Davido and Wande Coal?

Davido is probably one of the most confident artists I've ever worked with in Africa. It's probably Davido and Wande Coal, actually. Me and Wande Coal have a very close history, I used to be his DJ back in the days at some point, and we respect each other's music.

I play Wande a beat, he can come with almost ten different melodies for it in minutes. It's so easy for Wande. For "Olowo," the original story behind it was that I wasn't supposed to be a part of it. It was supposed to be a collaboration between Davido and Wande Coal, but because of a few logistics it was going to waste. So, I decided to come on board. I called the both of them like, "Look, we've gotta make this right," and that's how we did it.

We shot an amazing video for it too.

Who else did you work with on Ten?

That's how I made some of the songs on the album as well. Most of the Ten album, I wanted it to be about music, not the names. The names in there are like super big names, but at the same time they really brought their A game to the table when it comes to the music. They didn't act like a divas, it was easy to work with them, and I feel like that's what music should be about.

It shouldn't be about who you are, where you belong. No. I contact people based off if I feel like, "This person can do this." There's a lady called Niniola on the album and a guy called Byno, who was also on my first album.

These are people whose career's are just growing back home. People always ask me, "Why did you feature these guys on the album? You could have gone after the easy money," you know. And I keep saying that I support talent. I support real talent. If I have my way, I will have them on my third album again, because they're talented and they're good.

So I work with artists like that and also with people like Wizkid. Me and Wizkid have been in the studio a couple of times, in and out. We've got a couple of songs coming, not just "Opoju." Wizkid is always very particular with the sound. He loves to take his time and hopefully, at the right time, if he's content about the song, he will let it out.

Where does the name Spinall come from?

I'm someone who really, really loves music, and I listen to everything. I'm a big fan of hip-hop and I really love R&B. I love afrobeats, I love afropop. Do you get it? I love fuji music, I love reggae, I love dancehall. So basically, I'm that DJ that spins all. That's how we came about the name DJ Spinall.

Do you have a 'secret weapon' song that you drop during sets to get the party going?

It's not about the songs, it's more how you play it. That's my secret weapon. It's not really about the song. Some DJs are so good at choosing other songs, I work best off moods.

It's not necessarily about trying to get them to dance, you know? Because when they dance, they might not be listening. But when they are listening, they're learning the music. So my set at Mixmag, for example, was about teaching people our music and African music.

So you have a new album coming before the year runs out. Does it have a title yet?

No. My titles comes last.