An Examination of Aunty: Documentarian Laylah Amatullah Barrayn on the Historical Weight of the Word 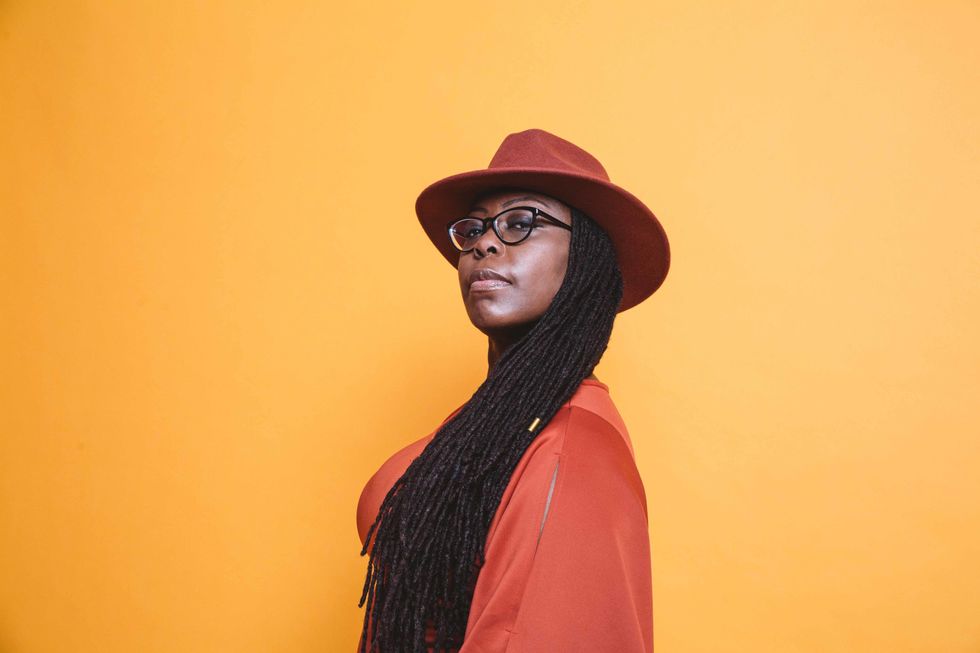 Photographer Laylah Amatullah Barrayn's latest exhibition forces us to examine our use of the word "aunty" while grappling with agency, identity and the perception of African women.

Ask any Black person of the African Diaspora who their favorite celebrity aunty is and you'll likely receive 10 different responses.

There's Maxine Waters, whose tenure and temerity in Congress have endeared her to the Black community at large. In entertainment, you may get Jenifer Lewis, who has effortlessly played so many maternal figures on the big screen that she proudly titled her memoir The Mother of Black Hollywood. The music industry has given us women ranging from Mary J. Blige to Anita Baker—different eras of songstresses, but aunties all the same. And then there's Bose Ogulu, mother of Burna Boy, whose no-nonsense persona reminds fans so much of their own aunties that she has been affectionately ordained "Mama Burna."

The thread that binds all these women to this label is the sense of kinship, adoration, and respect endowed upon them by the Black Diaspora; the title is one that is earned, and to be carried proudly. "Aunty" is a name that surpasses its biological definition. It is a sentiment that photographer and documentarian Laylah Amatullah Barrayn and I discuss as we ponder our own transitions to such a position in our families—hers a pan-African unit several generations out of the continent—at the OkayAfrica 100 Women photoshoot. Barrayn is still buzzing from her go in front of the lens; it is not lost on the creative that the table—or the cameras—have quite literally turned. She is now the one being documented.

"Thanks for inviting me," Barrayn says, switching out the wide brim hat she's wearing to another one in her bag. Lately, she tells us behind-the-scenes, hats are her thing.

Barrayn's greatest works focus on documentation, and reclaiming and preserving the so very uniquely African use of "aunty" came naturally. This composition of lived experience anchored by historical context brought Barrayn to collaborating with author and art collector Catherine McKinley on Aunty! African Women in the Frame, 1870 to the Present, a Brooklyn exhibit that unfurled the legacy of African womanhood and agency through the lens and timeline of photography on the continent. The term "aunty" as a titular framework for the collection is equal parts reverence, exploration, and reclamation of the word, drawing through-lines on how the perception of African women has shifted in tandem with the storytellers in charge.

In many African cultures, aunty is a label bestowed unto a woman as a term of respect or status rather than an indicator of any familial relationship; an inversion of its application in the colonial era, where white landowners used the term to mammify or subjugate African women as the laborers and caretakers of their European overlords. In this way, the manner in which we reclaim it present day is not dissimilar to the painful history of the word "nigga" in the United States.

"We can't do a show called Aunty and not talk about that," Barrayn says. "Aunty was a derogative, colonial term… It was not positive so we wanted to look at both of sides of what aunty means."

In other words, as Barrayn says, "I like to show the whole conversation."

The agency represented in Aunty's photographs as new generations took hold of their images (and the words used to describe them) extends to curation as well, as Barrayn points out that a large portion of African works are mostly presented by white, male, European collectors: "It's important for me to kind of have that pushback by two women of African descent to present the works in our own context and contextualize it in a way that wouldn't erase some of the history and the culture of how and when and why these pictures were taken."

With that contextualization comes a reckoning of images she collected featuring African women before the establishment of African studios: colonial photography that reinforced a mammification (or inherent servitude) of the women not just on the continent, but also abroad. "They were used as postcards, they were used as part of the colonial project and regime to document what was happening on the continent as it related to their pursuits on the land," Barrayn says, highlighting that African women were an object of fascination. (Think Sarah Baartman, the Khoi woman taken from South Africa and paraded around Europe's freak shows.)

"What I didn't show in the exhibition was the back of the postcard. There were a lot of negative messages—'look where I am, look at this ugly woman on this postcard, I'm in the jungle, I'm glad this isn't you,'—and different things like that," Barrayn says.

This derogatory collection is juxtaposed by photos of African studios in the 50s and 60s by legendary artists such as Seydou Keita and Malick Sidibe—portraits and celebrations of young women engaging in everyday life—ultimately transitioning into the work of contemporary African photographers such as Fatoumata Diabate, using the camera as a medium to push the vanguard of representations of the African woman in present-day. As the African studios began to flourish, the photos veered away from third-person gawking to fuller depictions of daily life—anything from traditional ceremonies to young adults on their way to the club, with full consent of the parties involved.

Images from Aunty! African Women in the Frame, 1870 to Present, "Woman in Afro" — Image by Adama Sylla, Saint-Louis, Senegal, Circa 1970

"Now, a lot of African photographers are shying away from the photojournalism and documentary work and really using a lot of creativity and their imagination and creating new ideas about their lives and the world," Barrayn mentions excitedly. "And a lot of the work now is fictionalized and storied which is really interesting and fun. It's an experience to engage with because you get to see what people on the continent are thinking about themselves and what could be."

Naming this generational collection of photos came easy. Aunty, Laylah says, is what intrinsically developed as she and McKinley went through the process of selecting which of the photos amassed would make the final cut for the exhibit: "We were like, 'Okay let's put this aunty to the side.' We were calling these women aunties. We had seen the photographs before, they felt very close to us, even though they were photographs, they were African women from various African countries....it was just so intuitive."

The century-long transition Barrayn's project showcased rendered the dynamic of the subject of the photos from purely exploitative to more collaborative, allowing for the women to choose how they want their stories to be captured for themselves, as opposed to having a narrative foisted upon them. As was deserving of proper aunties, they were now being granted with the respect, deference, and agency they had long been denied.

In a manner, these photos had been seen before by many of us first generation children; a fair number of these images were reminiscent of the photo albums tucked away in the houses of our parents and grandparents. Our albums possess snapshots akin to the artifacts being gathered by the various white collectors across the globe—priceless commodities that preserved the legacies of the women who came before us. For Barrayn, they were a critical opportunity in allowing us to become our own archivists, as opposed to letting our stories continue to fall in the hands and context of said collectors, such as Andre Magnin's collection of Sidibe's work.

"Family archives are very important to me in understanding who you are as a person, as an individual, your familial and cultural identity, and also really documenting the time too," she says. "Now, some of the photography that's from the 40s and 50s are worth a lot of money—so if you don't value it somebody else will."

As she relays this to me with conviction, I think about my upcoming trip this summer—back to my family's homeland of Comoros, where I'll spend time with my many aunts, biological and otherwise, in a woman-dominant clan. For most of my life, I have called all of them Tata—the French word for aunty—but in recent years, as the next generation has started to come of age, I have been elevated to Tata status of my very own. Inheriting that mantle comes with a duty to preserve the family legacy before those memories are lost—or, perhaps even worse, defined by someone else.

For Barrayn, she hopes that her work encourages people to create platforms that continue to show the whole conversation, similar to Aunty and her project MFON: Women Photographers of the African Diaspora—a publication that showcases the works of 100 women of African descent, and continues the tradition of using photography as a launching point for new perspectives and under-discussed narratives .

Chronicling our heritage through photographs is a privilege, and one that shouldn't be taken for granted as our forebearers lacked the ability to dictate narratives on their own terms. And exploring the language used against us, and how our current colloquialism has turned it into something we honor, is an important context to our overall history.

Aunty is more than a photographic exhibit to change the perceptions of how African women were seen and how they see themselves.

Shamira Ibrahim is a Brooklyn-based writer by way of Harlem, Canada, and East Africa who comments on culture, identity, and politics.