Does Kenya Really Have A Naija Music Problem? 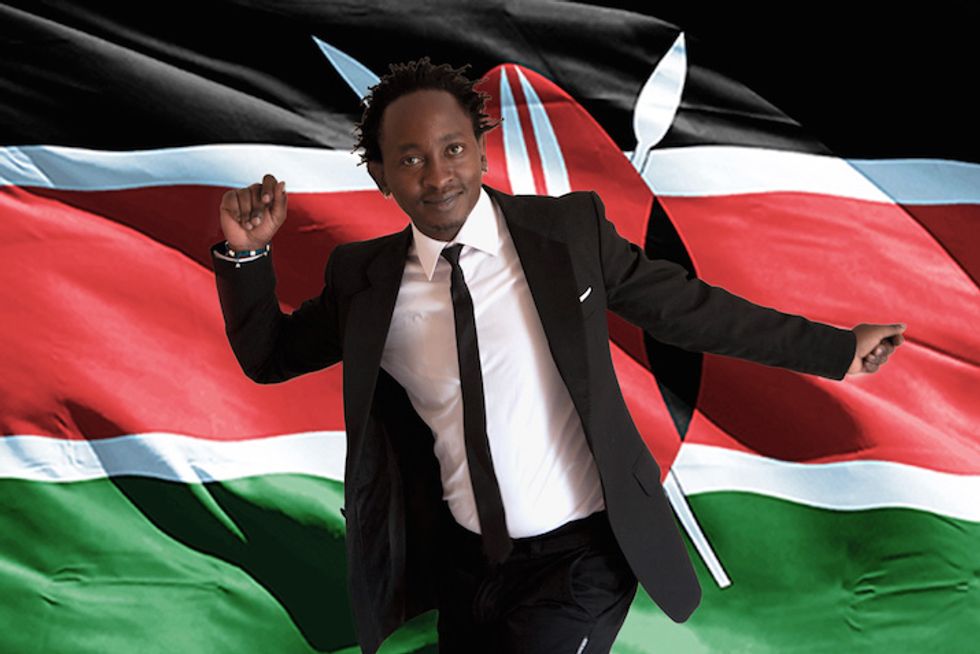 NAIROBI—The story is often told about the mother cheetah who comes back home from the hunt to find her cubs have been trampled to death by elephants. Knowing that she is no match for these giants, she blames and kills a herd of goats. Similarly, when a group of Kenyan musicians took to the streets last week calling for less Nigerian and Tanzanian music, they were killing goats. The elephant in this case is history. However, not even history is a match for innovation.

It’s funny, but the country music star Kenny Rogers can come to Kenya today, charge an arm and a leg, and play a month of sold-out stadium gigs. Yet his heyday was in the ‘80s. The same holds true for top-tier Nigerian acts. Their time, however, is now. Kenya seems predisposed to preferring the foreign, the exotic, the western. At the risk of being accused of bringing up ‘that old trope,’ it all began with the erosion of our culture when the colonialists came. Colonialism eroded Kenyan culture I daresay more than it did in West Africa, in Uganda, in Tanzania. Kenya was a settler state. The Brits had no plans of going anywhere. Ever. And in their assistance, and under duress, we threw the culture baby out with the pagan bath water and planted the Church and the Union Jack over the scene of the crime dressed in mandatory, state-issued calico cloth threatened by the physical and mental whips of our settler masters. And when the new government in independent Kenya clamped down on the Funk movement of the late 70s along with all other artistic expression, threatening and jailing academics in the universities and strangling the media, we shrunk into our cocoons, allowing ourselves instead to be satiated and sedated by the likes of ABBA, The Bee Gees and The Beatles. Homegrown innovation had been dealt a blow that would take us decades to recover from. I was born middle class (and English-speaking) in the ‘70s. My predilection for all things Western was established early in life. I would be irritated, nay embarrassed, when I’d get home from school and find the housekeeper blasting ‘that shady Rhumba.’ When I began my music career in the 90s there weren’t many Kenyan musicians to look up to. Anyone who had managed to record anything had been condemned by society to dying, drunk or living poor, a result of ‘loose morals and bad choices.'

I’m always slightly embarrassed when I introduce myself to folks I meet around the continent. I’m ‘Eric,’ while the South Africans are ‘Kgomotso'; the Nigerians are ‘Olusegun.’ Even while the Tanzanians might be ‘Damien’– pronounced ‘Da-mi-YEN’– they speak Kiswahili with such ease and fluidity having studied subjects like Biology in their national language. The Kiswahili language rolls off their tongues like honey to the easy beat of Bongo Flavour, as close as you can get to Zouk singing on dry land. As a result, in Tanzania, American Idol loses pride of place to Project Bongo, a reality show focusing on homegrown talent. Conversely, urban Kenyans get as far as Sheng, a hybrid of Kiswahili and vernacular so diverse that kids from estates separated by as little as a highway have different names for the same thing. Sheng dictionaries become obsolete by the time they go to press, owing to the rapidity in the change of vocabulary. A Sheng speaker can date you to within a year of your birth, locate your home to within a street by the word you use for ‘car’ or ‘mobile phone.’ In the rural areas, Kiswahili is as foreign as Greek, and is spoken only by those who might have picked it up in school or by those ethnicities whose ethnic language shares a common Bantu base with Kiswahili, akin to that between Italian and Spanish. We claim to have a national language. Listen again.

Then comes the issue of national pride. If Nigerians were to group the peoples of the world in order of superiority they would place themselves first. Them. The Americans. Manchester United. In that order. They have a very healthy self-image. In music the battle between Nigeria and Kenya continues to be fought mainly in the latter. I’m not sure Naija musicians even know there’s a contest running, and are a mixture of bemused and irritated by the prevalence of their music on our media observed when they visit. Urban legend recounts a Naija artist rebuking a Kenyan journalist for fawningly informing him that he was more famous than any Kenyan artist in Kenya. "This would never happen in Nigeria," he said. I want to thank him but I’m not sure that this isn’t a threat.

Where Nigerians are proud, Kenyans are mild-mannered. Where Nigerians are loud, we are meek. We suffer silently and only let our anger come out in large expressions of violence that shock the world. If a coup breaks out in most parts of Africa today it’s greeted by a sigh and a ‘ho-hum’ by the Western world. When one thousand Kenyans meet their deaths at the hands of their own countrymen the world stops. It takes one million Rwandese to get a similar effect. We are non-confrontational as a people and the largely conservative masses led by an even more conservative elite are happier to hunker down behind their corporate desks, more content with the bottom line than the shaking of bottoms. We pray for the day we will beat Nigeria at football. We’re used to losing to them. For the sake of the Nigerian team we hope that that victory happens in Kenya. At least we will grant them asylum. Nigerians are not used to losing to Kenya. If our victory happens in Lagos, no one is leaving the stadium alive.

We are, however, Africans together for international events. As Kenyans, we held our breath with them when one of the preferred candidates to succeed Pope John Paul II, the Nigerian Cardinal Arinze, got closer to the prize. But in secret we thanked God that he wasn’t elected because we would have never heard the end of it. For similar reasons, before we sleep, we raise a prayer of thanksgiving that Obama has Kenyan and not Nigerian roots. But this inferiority complex has plagued us even since the African Writer Series was founded in 1962- Chinua, Wole, Cyprian Ekwensi, Elechi Amadi. Growing up we seemed to be more aware of them than we were of Ngugi and Meja Mwangi; Soyinka’s The Lion and The Jewel getting more runs than Imbuga’s Betrayal In The City.

But when Kenyan artists march the streets asking for more airplay, what do they really mean? Surely they don’t mean a total ban? Where would we be without Stevie? Michael Jackson? The Beatles? Who wants to live a life without Beyoncé? And would you really like to be in a club that didn’t play Tiwa Savage, Chameleone, Diamond Platnumz? And if we embraced a total ban of art coming from outside Kenya, why stop there? Why not ban everything that wasn’t local? Like technology. Ban the television, the cell phone, the car, the computer. All innovation involves a certain amount of borrowing. You’ve got to start at a known to get to an unknown. You’ll hear the guitar lines of Kinshasa in the music of Stromae, Iyanya and Davido; South African rhythms and guitar lines are the signature of Paul Simon’s Graceland and Vampire Weekend’s music. In researching this piece, I confirmed the similarity between contemporary Naija music and traditional Coastal East African Chakacha- a driving 12-8, triplet feel heavily reliant on a 3-2 clave that is the signature of Afro-Cuban music. The Ragga beat behind Flavour’s "Nwa Baby" is exactly the same as Chaka Demus and Plier’s "Murder She Wrote," just at a different tempo, and the melody of the former is borrowed from the 1930s recording of "El Manicero" by Don Azpiazu Havana Casino Orchestra. Only heaven knows where Don Azpiazu got his version.

Is Kenya lagging behind in music? Our lawyers, bankers, brewers can compete with any of their colleagues globally. A Kenyan long distance runner need only beat his next-door neighbour to stand a chance at being the best in the world– recent culpability of doping notwithstanding. Naija music is brazen. It is not timid or full of angst. It walks into the club grabbing its crotch with its recreated sound of old turned over on its head, with easy lines and catchy hooks shotgunned by a thumping, ear-whomping, pulsating four-to-the-floor kick drum that grabs you, shoves a beer down your throat and promises you that tonight you will get lucky. And it comes with all its friends. When a Naija song plays, it’s charging at you through the speakers riding on the reputations of all of Nigerian Highlife, Fela, King Sunny Ade, Majek Fashek, and more recently P-Square, 2face and D'banj. Add to that the dizzying pace at which they release new material and you’ve got a tsunami. Maybe Kenya has suffered from not having an all-embracing identity genre that helps artists ride on each other’s shoulders. I’ve always been a proponent of diversity, but it can be argued that there’s not a single Jamaican Reggae, Ragga or Dub artist who’s not running on the steam of Bob Marley, Peter Tosh and their contemporaries, wittingly or not. I mean when you’re waiting for the starting gun at the Boston Marathon, and the guy next to you is wearing a vest that says Kenya, even before you’ve run an inch you’re out of breath.

So when a group of Kenyan musicians march the streets of Nairobi saying they want more airplay, what they mean is that they just want more. Of everything. They want more access to great producers, more policies that favour growth not through airplay quotas (who wants to force appreciation?) but through education, more damn money from airplay, more prosecution for content aggregators who don’t remit royalties. More space– not protectionism– to be heard. With the same care and attention that a farmer would pay to a seedling. They’re just taking it out on the Nigerians and Tanzanians because right now they seem to be getting all the love. This misdirected energy is not new. It would be better spent writing songs, though. Songs that come out punching at your heart or your dancing shoes.

Eric Wainaina is a writer, singer, songwriter and producer from Nairobi, Kenya, who’s just trying to figure stuff out. Follow him on Twitter.