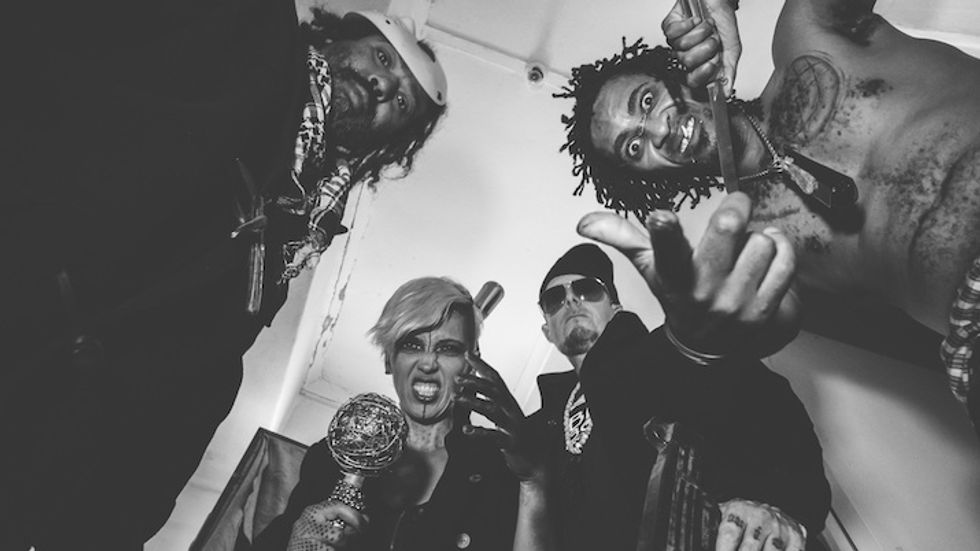 Last year, Cape Town-based grimy noise rap outfit DOOKOOM sparked a national debate in South Africa with the music video for their racially charged, post-Apartheid protest song “Larney Jou Poes.” As right wing Afrikaans fundamentalist group AfriForum sought to take legal action against the group in October for what they deemed a use of "hate speech," Okayafrica contributor Justin Buys saw the video as a crucial test for South African society. "The outcome of this impending lawsuit will be an insightful indication of how far we’ve truly progressed from our sordid past as a nation," Buys wrote. "It will be a tragic indictment on our democracy if the children of those who were banned from listening to Bob Marley and Lucky Dube are banned from listening to DOOKOOM."

Since then, the group has flown somewhat under the radar. But although they've been out of national headlines, they still have much brewing behind the scenes, including a collaboration with David Banner and their very first international tour. As the band sets out on a five-city stretch in France and Poland, we caught up with DOOKOOM's controversial frontman Isaac Mutant and producer Human Waste over email. Read the full Q&A below, and see above for the group's recent shoot with Cape Town-based photographer Imraan Christian for Popsicle TV.

Okayafrica: What have you guys been up to lately?

Human Waste: We’ve been rehearsing intensely for our European tour. We just shot a video for ‘Electric’ from our recent EP, A Gangster Called Big Times. We just finished a track with David Banner called, ‘They Lie (We Die)’. We’re shooting a video for the track too. We’ve also been talking to Pieter Hugo about him shooting a video for ‘Dirty’ - it’s a crazy concept.

Okayafrica: Have you ever been to Europe?

Isaac Mutant: I've been to other planets but never outside of South Africa.

Human Waste: spo0ky and I have toured Europe a few times with other projects, but this will be the first time with DOOKOOM. We’re looking forward to unleashing this show on Europe.

Okayafrica: What do you plan to do while you're there?

Isaac Mutant: There's a few Satanic sex cults I’ve read about. Then I’mma steal as many cell phones as I can. When Europe is asleep. Been dreaming of doing this my whole life. French prostitution is on the list as well. But I speak only for myself.

Human Waste: It’s a short, intense tour so it’s going to be a lot of travel, sound checks, killing shows and drinking. Our first show is in Lyon where we have a lot of friends - maybe we’ll play some boules and drink Pastis. We have a couple of days off with our label in Marseille so it’s going to be nice to catch up with them.

Okayafrica: When will we get to hear new music from DOOKOOM?

Isaac Mutant: We hope to release a new music video by next month. The head n***a in charge said I may say that. Or did he? I forgot.

Human Waste: We’re releasing our second EP, ‘Silbi Dog’, in a few months. If everything goes according to plan, we should be releasing our single with David Banner, ‘They Lie (We Die)’, with a video, in the next couple of months. It’s too early to give specific dates yet though.

Okayafrica: How'd you link up with David Banner?

Human Waste: He saw our interview on Vice / Noisey and gave us a shout out on Twitter. Roach holla’d at him to ask if he would like to collab and he immediately said yes. It’s a great honour to be working with a true OG of Southern hip hop. We both share an interest in the damaging effects of white supremacy. I sent him a beat I thought was perfect for the collab and Mutant wrote a couple of verses to set the direction. Mr. Banner dropped some of the hardest bars we’ve heard in a while and Mutant wrote a new verse to keep the levels up. What we have now is an incredibly powerful track. Some things have to be broken down before they can be built back up. We hope this track contributes to smashing down some of the fuckery.

Okayafrica: Will you write any music in response to the xenophobic attacks?

Human Waste: I don’t know if we’ll do anything that deals specifically with xenophobia, but who knows? I’m sure Mutant will filter the emotions of some of the recent events and unpack them into something DOOKOOM.

Isaac Mutant: Xenophobic attacks are nothing new. I like to think DOOKOOM doesn't jump on band wagons for sensationalism. If it pisses us off enough / moves us enough to say "Everybody’s poes" , I guess we will. There's nothing new about these incidents. In fact I feel like writing something about paparazzi and Government witnessing these events and stroking themselves until this kak escalates to a state of emergency. It’s another form of racism. It’s like home to some of us.

Okayafrica: What are the social issues you've been talking about lately as a group?

Human Waste: Obviously xenophobia has come up recently. We just performed at an anti-xenophobia event in Cape Town. South Africa is still suffering from the effects of Apartheid. The majority of people are still living like shit and there is a lot of discontent. Race will continue to be an issue in South Africa for the foreseeable future. There are endless social issues to keep us busy, inspired and angry for years.

Isaac Mutant: Everything. Obviously Xenophobia. Now that I think of it, what happened to the zombie virus? Police Brutality and racism are all-time favourites. Unemployment is also a winner.