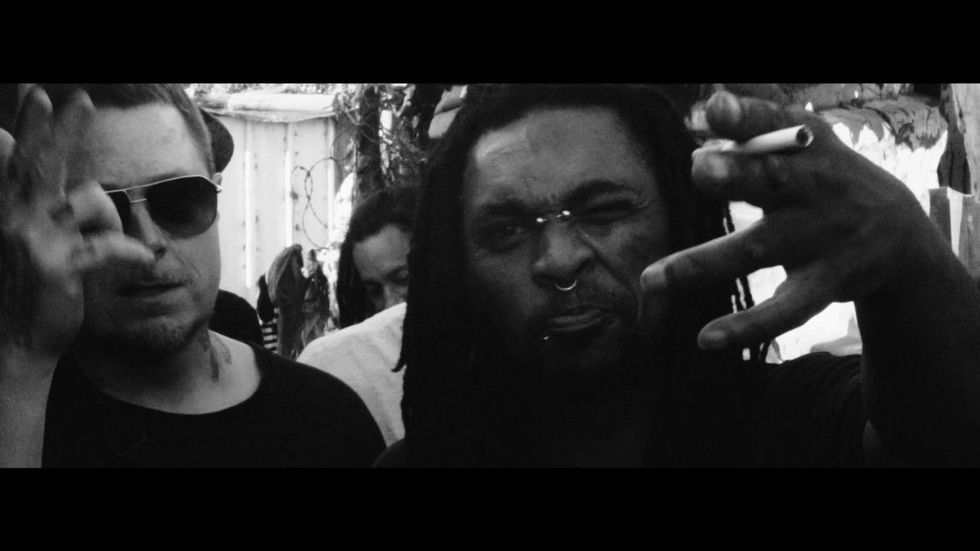 DOOKOOM is a South African band known for it’s eclectic sound and presentation, with songs that live somewhere in the intersection between afro punk, industrial hip-hop and noise rap. The band have just dropped a new video for their latest single, “You Don’t Exist,” off their recent album No!.

The group are definitely not shy about tackling what they deem as pressing issues in South Africa, shattering the rose-tinted lenses of a utopian-like ideal of the post-Apartheid nation. Their new video lives up to this narrative, taking us on an eerily gut-wrenching journey to what DOOKOOM refers to as “the ghetto,” more specifically, Heinz Park in the Cape Flats area of Cape Town.

The Cape Flats, a low lying area southeast of central Cape Town became synonymous as the dumping area for “non-whites” as a result of racial segregation policies legislated by the former Apartheid government, starting in the 1950s. Decades of brutal, dehumanising policies from the former administration incubated a harsh and unforgiving environment which lead to severe levels of drug usage, crime and gang violence—a legacy that continues to linger.

Now, twenty three years on since the collapse of Apartheid, DOOKOOM throws us into this excruciatingly uncomfortable space which they say the current democratic administration has forgotten.

We had the chance to catch up with the band—made up of rapper Isaac Mutant, producer Human Waste, visual artist spooky, and POTTS—ahead of the release of their new video.

How did the idea for “You Don’t Exist” come about?

Isaac Mutant: Since it’s the ‘in’ thing to be gangsta in the rap world, others’ attempt to illustrate this seemed laughable. The process was easy. I told my brase to have a drink and ignore the camera. Then I told the camera guy to capture everything. Everything an average coloured does is Gangsta.

spo0ky: We originally had a direction in mind but it evolved into more of a documentary than a music video. Clinton Theron, the cinematographer, spent a weekend with Isaac Mutant in Heinz Park, where Isaac used to live. They hung out with Isaac’s brase. As always, things are unpredictable out there and Clinton documented what was happening around him.

Human Waste: We just wanted to show an average day.

You chose to shoot on location in Heinz Park, an area in the Cape Flats. What’s the significance of this area to each of DOOKOOM’s band members?

Isaac Mutant: The people of Heinz Park looked after me when I was homeless.

spo0ky: When I first showed "You Don’t Exist" to a friend in Belgium, she was shocked by the rawness, harshness and darkness of it all. She thought the video was staged. When I explained to her that this was the daily situation of lots of people in South Africa, she was truly shocked. Heinz Park is a constant reminder of the consequences of colonialism, white privilege and capitalism.

POTTS: To me, it is close to where I grew up as a kid, a place called Strandfontein, close to Mitchells Plain. Heinz Park is a suburb that most people in Cape Town overlook (Geez I don’t even think that the "rich" people of Cape Town even know it exists?!). Poverty level is high, that's why most of the people have to resort to some type of crime just to get by.

"Heinz Park is a constant reminder of the consequences of colonialism, white privilege and capitalism."

What is DOOKOOM’s relationship to the Cape Flats and what you describe as ‘the ghetto’? How much time do you spend in ‘the ghetto’?

spo0ky: Besides Isaac coming from the ghetto, it is also a synonym for those who are oppressed, who are not heard, who don't fit or have been made to not belong. History is told from the winner’s perspective, sometimes the story needs to be told from the other side.

POTTS: I was brought up in the Cape Flats, I am considered to be a "Coloured," well, a light-skinned one (laughs). Most of my family are from the flats. I always end up in the so-called ghetto's cos that's where most of the people I know come from.

In the video, you go on to say that the government indirectly tells the ghetto “you don’t exist.” Twenty-three years after the first democratic election in South Africa, how much do you think the government has done to improve the Cape Flats?

spo0ky: Would you willingly choose to live in the ghetto?

Human Waste: It’s hard to see much change. Cape Flats communities are still ravaged by drugs, alcohol and violence. Gang culture is still prevalent and children are regularly traumatised at best, and shot and killed at worst on their way to, or at, school. It’s very easy to feel that the government has forgotten the Cape Flats.

I’ve read in an earlier interview that DOOKOOM describes itself as a ‘perverted version of the Rainbow Nation.” Can you explain to our audience what this means?

spo0ky: The ‘Rainbow Nation’, the tagline of South Africa, is a myth. A marketing myth. People over profit.

Human Waste: The Rainbow Nation doesn’t exist. It was a lie sold to the dispossessed to keep them drunk on false hope. The fact that there are still many places like Heinz Park proves this.

What’s your perspective on ghettos in other parts of the country? Are you in conversation with other artists with similar messages?

Isaac Mutant: I'm connected with cats all over the country in ghettos. It’s like one plan fits all. The rich gets richer, the poor gets poorer. Even more so lately. It’s like the middle-class is disappearing. Either you're super-rich or super-poor. Of course the rich needs servants, so what would be the purpose of the middle-class. For an artist this is even more frustrating cos you scream but no-one is listening. Then you think fuck this and grab this knife then rob some rich white marrafukka cos you gotta eat.

You ruffled a lot of feathers nationally within South Africa, and were even accused of hate speech by Afriforum with the release of “Larney Jou Poes,” echoing black rage at centuries of exploitation of black farm workers by white farmers in the Western Cape.

I hear a similar piercing intensity and rage at decades of injustice you describe in “You Don’t Exist." What kind of a response are you expecting from this new video?

Isaac Mutant: Personally I was dumbfounded at the "Larney Jou Poes" response. I couldn't believe people were shocked at the truth. So I've learned to expect anything, especially from comfy, sensitive white South Africa. My take on it is this "you build the zoo, now take a stroll in it and imagine the cages are open."

spo0ky: World peace. But seriously, let’s start by simply acknowledging the person right next to us. And the next…

Human Waste: "Larney" only became such a big deal because AfriForum decided to try to silence us and turned it into a big media spectacle. It’s generally pretty easy for people to ignore angry voices of rebellion. I’m sure this video will slip quietly under the radar because it shows what white people don’t want to see. We’re not Die Antwoord, making safe, glossy, superficial art out of poverty and suffering. White people feel comfortable with that because it makes the ghetto look fun and cool. We show the reality which is hard to confront. White people would rather just pretend this life doesn’t exist. It’s easier to sleep at night that way, I guess.

What’s next for DOOKOOM? Anything brewing on the horizon you want your fans to get the scoop on?

spo0ky: We’ve been a bit quieter than usual recently because we’ve been working on our new album, RIFFAK. I think we’re all in agreement that it’s our best project to date. The album will be out in February 2018 on I.O.T. Records.

We've got music videos for "The Worst Thing" and "Electric 2" coming out in October and November of this year.

And we’re super excited to end 2017 with show at the Afropunk festival in Johannesburg for New Year. And for all our friends in Europe, we’ve got a tour planned early 2018.