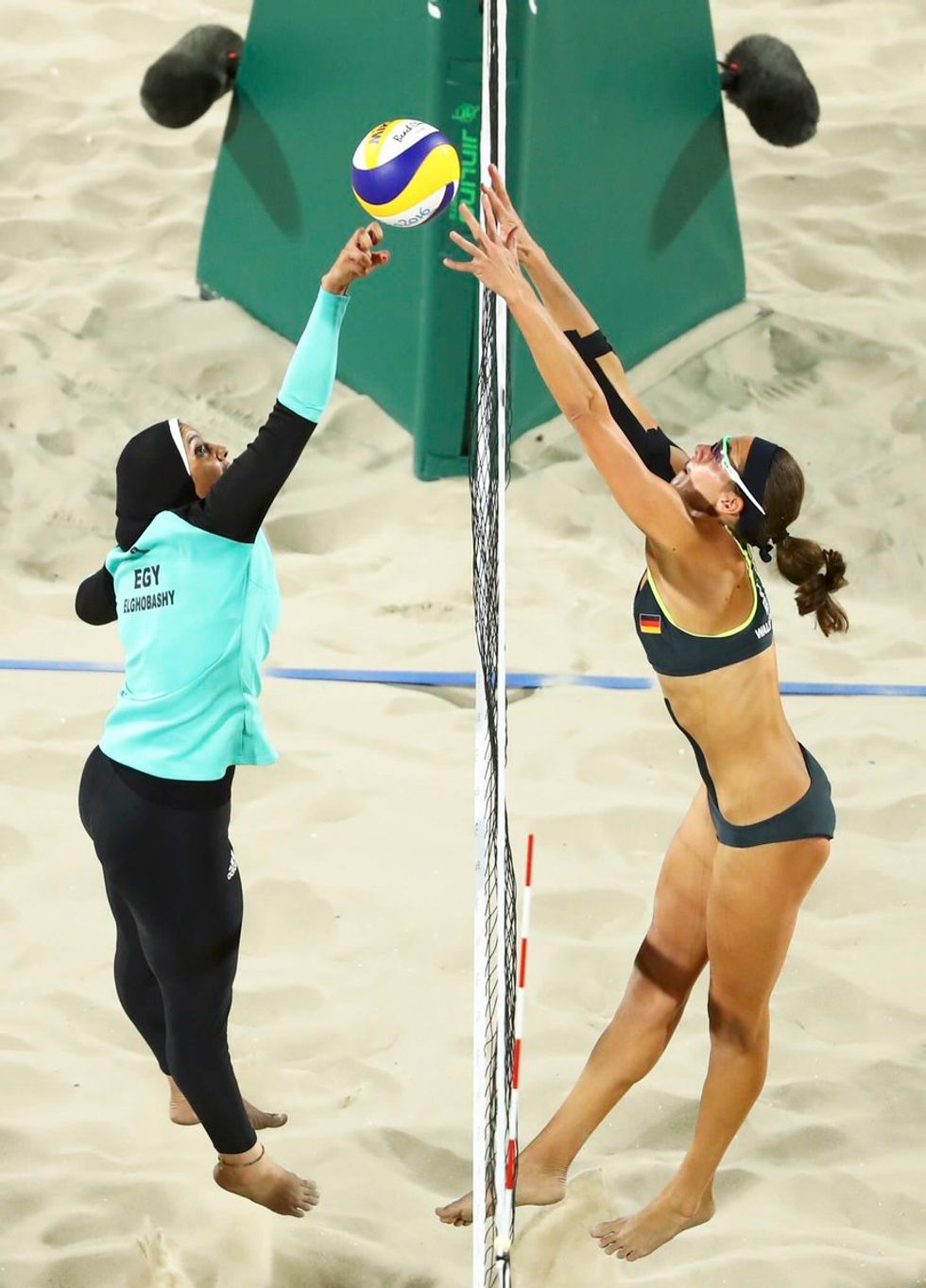 The end of regulation bikinis means team Egypt can play the sport on their own terms.

Egypt’s first women’s beach volleyball team to participate in the Olympics since the sport was added in 1996 made their initial appearance against Germany at the Copacabana venue Sunday night. It was the Egyptians’ first international event outside the African continent where they had won a major title in April and are ranked 15th overall.

All eyes were on the duo Doaa Elghobashy and Nada Meawad as they appeared donning long-sleeves and long-pants out of respect for Egypt’s Islamic culture of modesty. Elgohbashy also wore a hijab that covered her hair, which was permitted in a last minute decision after African Volleyball Confederation chairperson Amr Elmany of Egypt made the ask of the International Volleyball Federation (FIVB). Their uniforms offered a refreshing sight that contrasted the barely-there uniforms of German players Kira Walkenhorst and Laura Ludwig.

"I have worn the hijab for 10 years," Elghobasy tells reporters after losing to Germany 2-0. "It doesn't keep me away from the things I love to do, and beach volleyball is one of them."

It appears women’s beach volleyball at the Rio Olympics and future games won’t only have to count on the sex appeal of teeny-bikini-clad players to draw ratings going forward. Even if U.S. beach volleyball player Kerri Walsh Jennings argues lycra two-pieces are better for game play.

The Egyptian Women's Volleyball Team wears a Hijab in #Rio2016#OlympicGames#Olympicspic.twitter.com/atyPVEJMcu

Leading up to the 2012 Olympic games in London, the FIVB relaxed its regulations in effort to be more culturally sensitive. The new rule permits uniform "shorts of a maximum length of three centimeters (1.18 inches) above the knee, and sleeved or sleeveless tops."

“Many of these countries have religious and cultural requirements, so the uniform needed to be more flexible,” International Volleyball Federation spokesman Richard Baker explains to The Associated Press.

The adjustment of the uniform regulations is having an impact as participation in beach volleyball is up to 169 countries compared to 143, four years ago.