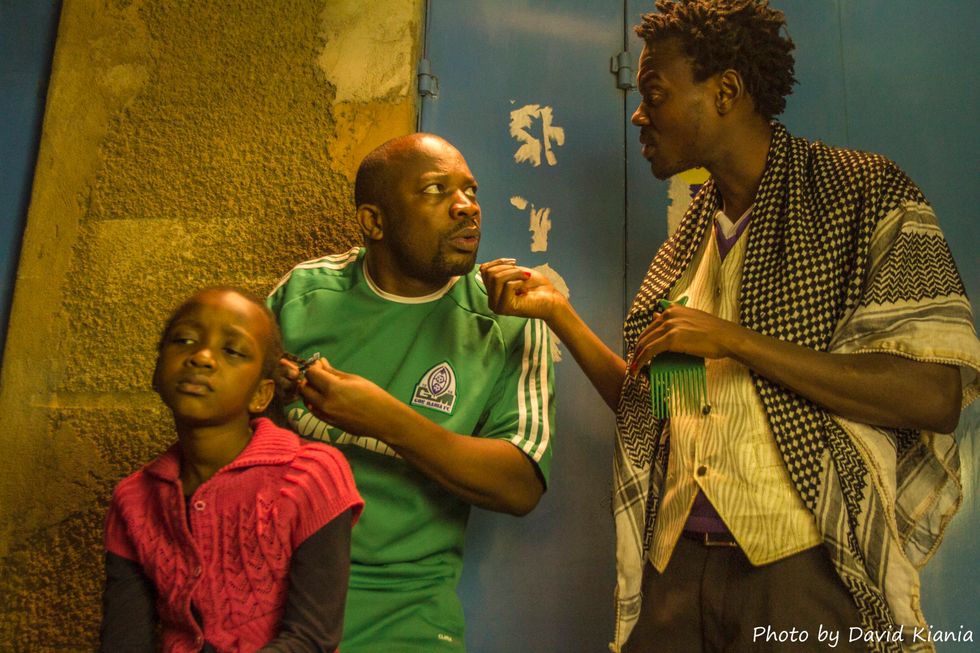 Filmmaker Ekwa Msangi pens a call to action to support the work of independent African filmmakers.

I grew up in Kenya at a time when 99 percent of all television, film and music programming leaned to the West (The stats have changed a great deal since then for television and music, but film is still mostly Western produced). It’s hard to explain what it means to never see one’s own image reflected in any type of realistic way, but the closest example I can share is when I travelled abroad on my own for the first time at 16-years-old.

As I sat in an airport cafe in Amsterdam waiting for my connecting flight, a young, white busboy was clearing tables. The sight of him doing that type of work made me so uncomfortable—I literally had to leave the cafe in order to stop myself from jumping up to help him.

It wasn’t because the table was a mess, and not even because it was my mess to begin with, I just realized that I’d never seen a white man do that kind of work. Images of young white kids working at McDonalds or similar working class setups existed, but not usually in the presence of people of color. Growing up in East Africa, both on the screen and in real life, I only ever experienced white people in positions of superiority, as managers and bosses. Regardless of age or experience in their home countries, in Africa, they were immediately superior to anyone else, or at the very least, on par with anyone else.

I left the cafe feeling frustrated and ashamed that a white man clearing crumbs was so foreign to me, or rather, that it felt like some person of color should be doing that instead—that one of us was slacking on the job and forcing this “poor man” to pick up after us.

It took me a while to digest what happened, but the message message I took home was that I’d somehow been tricked into thinking that the current images and representations of Black people were correct and normal. And therefore, my answer was that I needed to change those images. Not to show all white people as servants in our place, but rather show the representation of what I knew to be true about my own family and friends that was never seen—funny, dramatic, imaginative, brilliant, and everything in between. The field had been set and now it was time to get training to wage the battle.

During British, French, Portuguese and Dutch colonial times, we had freedom fighters who dedicated their lives to liberating our land and our people and Pan-African leaders who wouldn’t rest until all land and people were free.

African filmmakers have been compared to modern day griots for years, but I’d like to offer what I think is a more accurate comparison: we, too, are freedom fighters. And before you get all hot and bothered about how audacious this claim might sound, I invite you to humor me for just a moment as I lay out the important and revolutionary work that we as independent filmmakers do for our communities and for the world.

As an artist, I belong to a collective where we dedicate our life’s work to freeing the minds, hearts and culture of our people, and who refuse to stop until all minds and creative resource belongs to us and is firmly in our own control.

And similar to several liberation leaders of the past, many of our causes have been funded by foreign allies and interest parties, but we won’t have true liberation until we start to invest in our own liberation. In our own causes. Until we see it as something that we must do for ourselves, and not that we’re helpless victims waiting for someone else to come and liberate us.

The stakes are hardly the same! —You might say, and it’s true, many of us aren’t running from gunfire quite in the same way. But being an artist in a capitalist world means making choices that puts my livelihood in jeopardy on a daily basis. For many of us working on the continent and abroad, if a client refuses to pay, steals your work, or any other injustice, there isn’t even the dignity of a court system that would adequately defend our rights. Being a starving artist is a reality that many artists face, or at least having to chose between having a family, having a home, having enough to eat and making the work that we need to make.

So why bother to make it if it’s so hard and risky? Because the work is needed. Because continuing to allow our children to see themselves through the lens of someone else’s portrayal is irresponsible and abnormal.

Think about how many times you’ve put on your favorite song and gritted your teeth to get through a tough day at work, or you’ve gone to let loose on a dance floor. Think about how you’ve sank down in front of your television to watch a movie and “zone out” from whatever stresses you’ve encountered.

Now, think about what would happen if that wasn’t an option—or if the only option of “unwinding” was to see images of people like you being further suppressed and ridiculed. The reason that I make work, regardless of how hard or risky it is, is so that I can encourage you to keep making the work that you make, despite the hardship and risk. But in turn, I need your energy and support to help me to keep going. It’s a symbiotic relationship.

My artistic work and that of my colleagues deserves support. And if anyone in the world should be the first in line cheering me on, encouraging me, and exchanging with me, it should be my people, because this work is made for and about my people. If there is a single group of people anywhere in the world whose sole mission is to reflect what your life circumstances, your beauty and brilliance and accomplishments are and always have been and will continue to grow to become, it is us: the independent African filmmakers.

Tanzania’s first president, Mwalimu Nyerere said: “A [wo]man is developing [her]self when [s]he grows, or earns, enough to provide decent conditions for [her]self and [her] family; [s]he is not being developed if someone gives [her] these things.”

So who are your modern day freedom fighters? Do you know their names? Have you sought their work out? Have you heard of Rama Thiaw? Teddy Goitom? Ng’endo Mukii? Idil Ibrahim? Ekwa Msangi? Alain Gomis? And that is only to name but a very small handful of incredible film artists—there are so many more that I could mention.

I invite you all to learn about an African filmmaker today. Not just the ones whose names pop up in the media or on Netflix from time to time, but the ones who are trying hard to sharpen their skills and refine their thoughts so that they may speak with clarity and truth about who we are as a people, what we’ve been through and the many possibilities of where we’re going next.

Come find us, we want to meet you. We want to exchange with you. We’ve been thinking about you for a long time, you’ve inspired our work and we’re fighting hard to tell the world about you. It’s time to take matters into our own hands.

Ekwa Msangiis a writer, director and producer who is most recently known for her award-winning commedy, 'Soko Sonko (The Market King).' She is currently in post-production on her short film, Farewell Meu Amor, starring Tony Award nominee, Sahr Ngaujah and Nana Mensah of 'An African City.' You can keep up with her on Facebook, Twitter and Instagram.