The Child of Culture Clash: An Interview with Estère 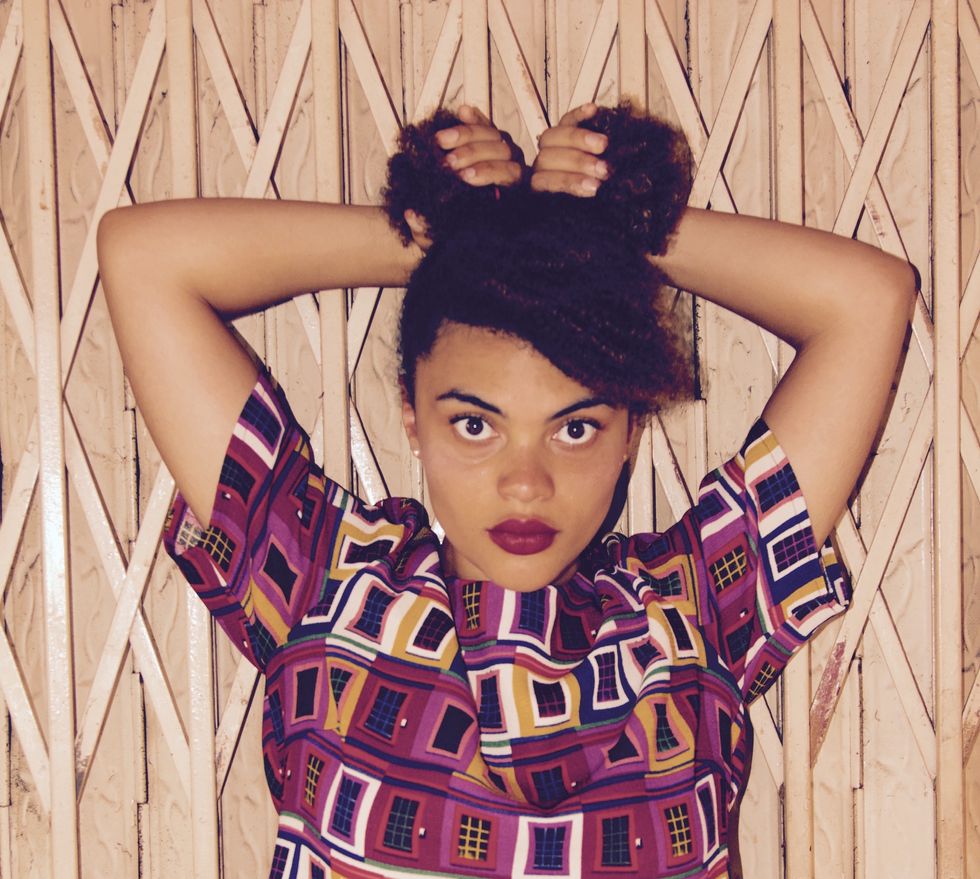 New Zealand-based, Cameroonian-rooted producer Estère sits down with Okayafrica on a recent trip to Johannesburg.

“I’m the child of culture clash” sang New Zealand-based producer Estère last Thursday in Johannesburg. Moments before, she had asked the crowd of mostly South Africans if they’d prefer to hear a song about her parents or continue dancing along to her enchanting ‘Electric Blue Witch-Hop’ productions.

For the 24-year-old musician from Wellington, a recent string of shows in Maputo, Joburg, Durban, Swaziland and Réunion Island is deeply personal. The daughter of an eighth-or-so generation New Zealander mother and a Cameroonian father, Estère’s Southern African tour is not simply her first time performing on the continent. It’s her first time in Africa period.

We caught up with Estère at Okayafrica’s Johannesburg offices just a few hours before the Akum Agency’s Southern African Music Festival Circuit sideshow at The Good Luck Bar alongside Somali-Canadian singer-songwriter Cold Specks, Bongeziwe Mabandla, Nonku Phiri and The Brother Moves On.

Alyssa Klein for Okayafrica: Tell us about your music…

Estère: I’ve coined the genre ‘Electric Blue Witch-Hop’ because I like the idea of creating a space for my music that is entirely for itself. Instead of being categorized into already existing genres. I work with a medley of inspirations and sounds. What I do is I create my own samples. I’ll record random sounds, like knocking on a desk or doors closing and opening, bamboo trees. Anywhere that I am. Airport sounds, babies, animals, buses. And then I lay them up as drum samples with existing drum samples and then record a range of instruments.

Electric Blue Witch-Hop, wow. What does it all mean?

‘Electric’ stands for the electronic component. Because I’m using machines––I use an MPC1000 as my primary base for the production. And then ‘Blue’ is like synesthesia, when you see colors and images from sounds. To me my music has always been blue. And then ‘Witch’ is alluding to the type of magic that I feel from music in general. For me it’s like you could be in a forest with sun streaming from the trees and completely alone, or you could be in a tunnel underneath the ground with a whole bunch of fairies, I don’t know. Music evokes all these feelings that you otherwise wouldn’t have. And then ‘Hop’ is alluding to the quite pulsey beat that I put in my music.

Do you call yourself a producer or a singer? I’ve seen you referred to as everything from a vocalist to a beatmaker.

So far let’s just say that I’m a producer. It’s really important in our modern musical landscape that more women be recognized as producers. And that is what I love to do. I love to produce and make beats. And construct and compose music. I say that I’m a producer first, and then I’m definitely a singer because I sing a lot. I wouldn’t say that I think of myself as a really good singer or anything like that, but I do sing.

So I don’t want to say “what is it like being a female producer?” I’ve seen so many interviews that ask “what’s it like to be a woman in music?” What do you wish people would ask you?

I wish people would just ask me about my production specifically. I love it when people after a show come up to me like, “Man, I love your production.” Or even “I love your lyrics.” The stuff I really focus on it’s not about me being a female necessarily.

I’m learning a lot as a producer. The first album I released it was me pretty much taking baby steps and learning about construction. But now I’ve got an album coming out. And I’ve really I can say personally developed in my production skills. And that’s how you do it. That’s the only way. And so when people come to me and ask to do collaborations––”Can I produce a song for you? Can I sing on it?”––I’m pretty much always going to refuse. Because I want to hone my craft as a producer.

What can you tell us about your new album?

I haven’t told anyone the title, but I think if I say it now we’ll be settled on it. It’s called Onother’s Lives.

How’d you get that?

A lot of my songwriting isn’t specifically based on personal experiences. I’m not talking about my own personal relationships and experiences of love and sadness or whatever. I imagine a lot of characters when I write. So for example one of the songs on the album is about a high class prostitute who wants to become president of the United States. Or another song is called “Control Freak” and it’s about the characterization of the emotion of being a control freak. And then there’s another one called “Underwater Whale Knowledge.” It’s about being a whale. Then there’s another one about being a child in a military state. Some of them relate personally, but a lot of the songs are stories that I’ve come up with. And so it’s about other people’s lives. It’s about other experiences that I’ve imagined.

First we flew into Mozambique from New Zealand. It’s about a 30 hour journey. And it’s the first time I’ve been to the continent of Africa, although I’ve got like 50 cousins that live in Cameroon and my father’s from here. But I’ve just never been presented with the opportunity to come here.

And both countries that I’ve been to so far, South Africa and Mozambique, have made extreme impressions on me. They’ve been really different to anything else I’ve experienced before. Mozambique was super colorful. I think of like muted pinks and turquoises when I think of it. And yellow dusty streets. People with amazing smiles. A lot of amazing artists.

And then South Africa is more similar to New Zealand in terms of its western scapes. Once again quite a variety of people to see. And also for me quite extreme in terms of the security. Because we don’t have anything like that in New Zealand.

Have you sampled any African artists?

I don’t really sample other music. I haven’t sampled anyone else’s music. I would love to in the future collaborate with some African artists as a producer.

Do you have anyone in mind?

I’m obsessed with Simphiwe Dana. That would be an ultimate dream. I would love to produce something with her.

What are you up to after the Africa tour?

After this I’m going to be going to Europe on tour. I’m playing seven French shows at the moment. Probably a line of shows in the UK. And I’m also playing Glastonbury.