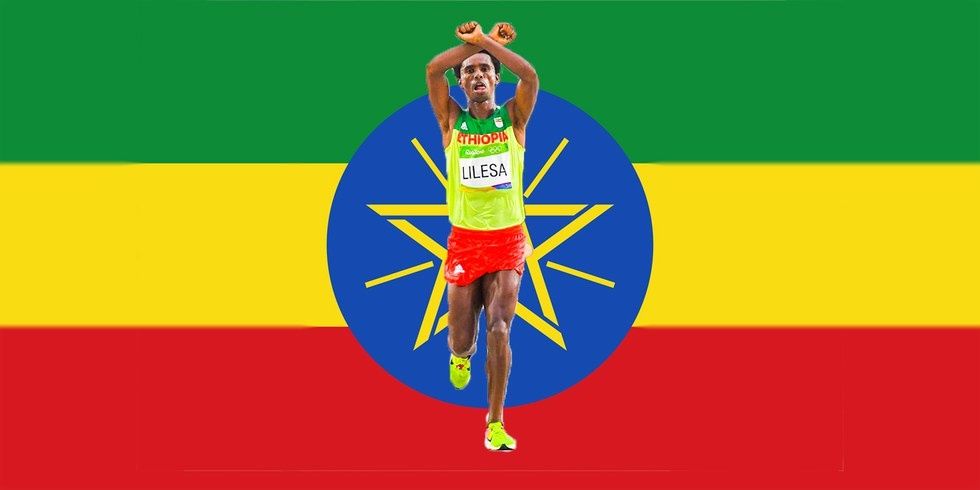 After two years in exile, the Olympic athlete will return home and receive a "hero's welcome."

Feyisa Lilesa, the Ethiopian runner who went into exile in 2016 after bravely protesting the Ethiopian government's brutal treatment of its Oromo population at the Rio Olympics, has been invited to return home.

After living in self-imposed exile in the United States for two years the marathoner—who demonstrated by crossing his fists as he reached the finish line at the Olympic games, claiming the silver medal—has been extended an offer to return to his homeland and compete for his country once again by the Ethiopian Athletics Federation and the country's Olympic committee. According to VOA News, the runner will return home in the coming weeks with his wife and children.

"Athlete Feyisa Lilesa has scored great results at the Rio Olympics and other athletics competitions enabling Ethiopia's flag to be hoisted to great heights," read a joint letter from the two athletics organizations.

"We want Lilesa to return to his home country to resume his athletics competition and upon his return we are prepared to give him a hero's welcome."

Lilesa's gesture brought international attention to the plight of the Oromo ethnic group in Ethiopia, who rebelled against the government in 2015. The protests, which left hundreds of people dead, led to the resignation of former leader Hailemariam Desalegn.

"I just want to share my gratitude. I would like to thank our citizens who sacrificed their lives …all of the young people and the elders who participated in the struggle," Lilesa told VOA.

Lilesa's acceptance back into the country is just one of the many symbolic gestures made under the leadership of prime minister Abiy Ahmed's—who is also Oromo—that signify a new tide in the East African nation. Last month, Ahmed signed a peace deal with Eritrean president Isaias Afewerki, putting an end to their 20 year war.

OkayAfrica spoke with Lilesa in 2016 following his gesture at the Olympic games, revisit our interview with the courageous athlete here.