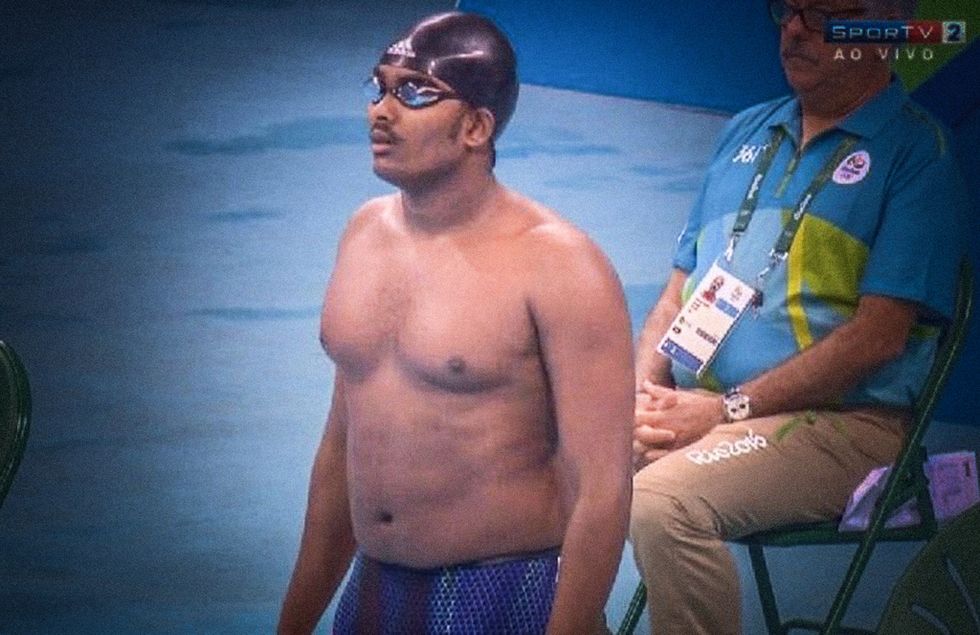 The internet can be a foul place as Ethiopian Olympic swimmer Robel Kiros Habte found out after he finished a whole lap behind his competitors in the 100-meter freestyle heats at Rio’s Olympic Aquatics Stadium on Tuesday.

He finished at 1 minute, 4.95 seconds compared to Australian winner Kyle Chalmers’ 47.9 seconds making him number 59 out of the 59 swimmers in the heats. The moment was reminiscent of Olympic swimmer Eric the Eeel from Equatorial Guinea who took twice as long as his rivals to finish the same race, though he set a record for  his personal best at the 2000 Sydney games.

Habte didn’t seem too embarrassed by his performance, saying “Everybody, every day you wake up in Ethiopia, you run. Not swimming. But I didn't want to run, I wanted to be a swimmer.” Continuing, "It didn't matter where I finished," which makes a valid point considering only an estimated 10,000 Olympians participate in the games every four years—that’s a 1 in 562,400 chance of even showing up.

The 24-year-old university student received cheers from the Brazilian crowd, but the Twitterati was not impressed. Some stated the obvious, dubbing the 179-pound Ethiopian swimmer’s stout stature,  the “dad bod” and nicknaming him “Robel the Whale.”

"Hey everyone's dropping out of golf, want to try something else?" Robel Kiros Habte "I like to pools" - probably pic.twitter.com/uJKl7ainil

At least the world now know that we're not all skinny n starved. Lol #RobelKirosHabte

Others cracked jokes in videos:

And some wanted to know how in the heck Habte qualified for the Olympics in the first place, until it was revealed that he may have been there to fulfill his African father’s dream who just so happens to be the Ethiopian swimming federation president, Kiros Habte Kinfe.

According to sport journalist Konjit Teshome, Robel Kiros Habte aka the Whale is the son of Ethiopian swimming federation president.

#Ethiopia 's #RobelHabte. 59th place at #Rio2016 . With him is the #ETH swim federation president who's HIS DAD. pic.twitter.com/kLLzLA1dAS

It’s alleged that Habte (or his father on his son’s behalf) secured an invite from the Tripartite Commission, which allocates spots for athletes from under-represented countries that have less than eight athletes. If that is the case, then it's a gigantic red flag for corruption within Ethiopian athletics.

This development could explain why Habte was simply happy to be there.