Born On A Tuesday: An Excerpt From The Novel By Elnathan John 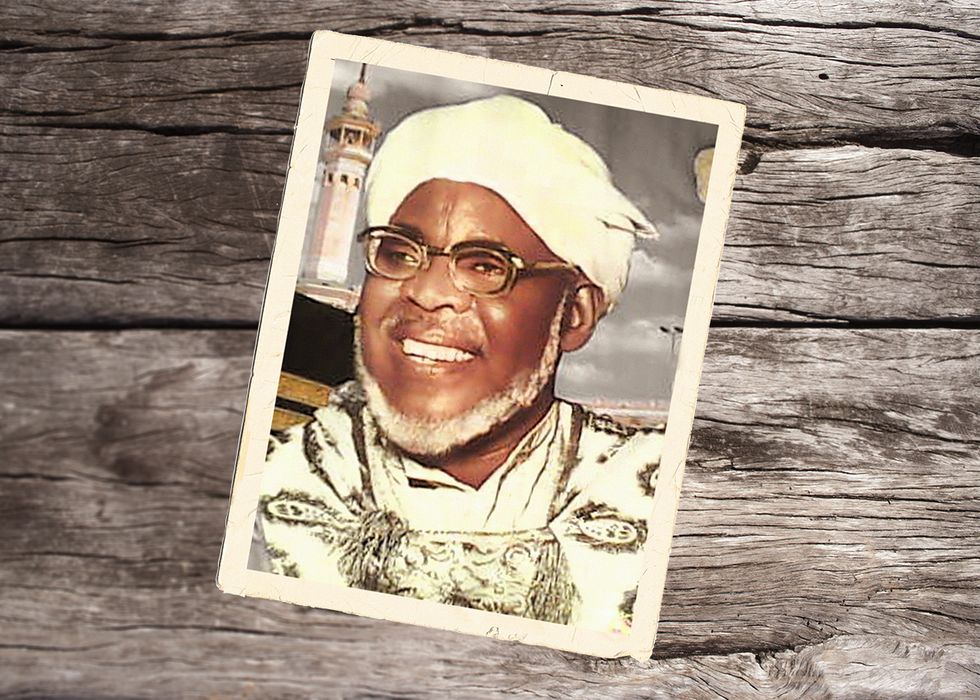 An excerpt from the new novel by Nigerian writer Elnathan John.

I see it and the walls of Umma's room come back to me, when she still had words in her mouth and life in her eyes. That is the only memory I want.

There is a boy in a tight yellow T-shirt standing outside the mosque in plastic sandals with two yellow-and-black striped polythene bags on the ground between his feet. He is staring at the mosque. His mouth is bunched and his nose widened like someone who has been punched just before a fight is forcibly broken up. His cheeks are bony and his forehead is lumpy and he has scars, like someone who has been in a lot of street fights. It is easy to tell from his knuckles that he has wounded himself a lot from punching people in the mouth. He is about the same size as me.

Malam Abdul-Nur peeps from the mosque and motions to the boy to come in. He hesitates. Malam Abdul-Nur then shouts something in a language I don't know. The boy slowly picks up his bags and walks towards us, frowning.

Right in front of the mosque the boy stops again. Malam Abdul-Nur grabs him by the hand and drags him inside. They walk into Sheikh's of office and shut the door. I go back into the mosque, curious. I pick up a broom and sweep, climb a stool to remove cobwebs—every excuse to come closer to the of office and hear what is being said. I hear nothing.

They are in the office for about an hour. Malam Abdul- Nur emerges first from the office followed by the boy and then Sheikh. I pretend to continue sweeping.

'Ahmad. We have a guest. His name is Jibril.'

Malam Abdul-Nur glowers at the boy and reaches to

slap him. Sheikh restrains him.

'He is Malam Abdul-Nur's brother. From Ilorin. He will

stay with you in the back room. Pull out a mattress from the store for him.'

I drop the broom and head to the room behind the mosque. I move my little radio, my bag which Sheikh gave to me and the photo of Sheikh Inyass I found one day on the ground at the motor park. The photo of Sheikh Inyass is identical to the one Umma had in her room in Dogon Icce. I unroll the mattress Abdulkareem and Bilal shared when they were here, lay it on the right side of the room and cover it with the only other bedsheet. I am thinking as I move things around whether to call him Jibril or Gabriel.

He opens the door and drops his bags by his feet. I stretch out my right hand. He is still frowning and looking around the room. He shakes my hand but lets go almost immediately.

He doesn't unpack. He doesn't relax. He doesn't stop frowning and bunching his lips. I see the horizontal scar that runs from the side of his mouth right across the right half of his upper lip and I think of Gobedanisa and the scar that Banda gave him. Suddenly I want to tell him my stories of Bayan Layi that I have not told anyone, so he can tell me his own stories of how he got his scars and where he comes from.

I want to say something but my mouth won't open. It is like waking up in the night from a bad dream and I cannot scream or get up or move any part of my body because it feels like someone is pressing me down. I am always scared when that happens.

I can't sleep. I roll over and find the boy restless and slapping his body to fight mosquitoes. The ceiling fan is off because the noise it makes in my ear is like bottle tops being scraped over concrete. But it keeps away the mosquitoes. I turn it on and give him one of the cloths I use to cover myself. He looks up with his puffy eyes and takes it from me.

The ceiling fan is grating away and the boy has started snoring. The combination of the two noises creates a sound like a song—not as bad as just the ceiling fan alone. Like groundnuts and tiger nuts. Eating groundnuts alone makes my chest burn but together with tiger nuts they are nice and taste like milk that has a bit of salt in it.

Many memories oat in my head. Memories of when all of my family was still in one house in Dogon Icce. When Maccido used to pinch me and I would cry and nobody would believe me when I would say what he did. When I used to be angry that the twins got anything they wanted and my father hit Umma, Maccido and me, but never them. When I heard Umma screaming and the midwife who came to help her give birth came out with a bag that my father eventually went to bury. When the midwife came again after less than a year and my father had to make that trip to the burial ground a second time. When in Bayan Layi, Malam Junaidu flogged a boy who couldn't remember his Quranic verses with his tyre whip and the boy threw up blood, was taken away and never came back.

The memories dance around in my head like my image dances around when I look at myself in a pool of water that isn't still.

Sheikh comes into the room himself, waking us up earlier than usual. It is Thursday and like him we fast on Mondays and Thursdays. He has brought in hot koko, kosai, some bread, dates and slices of watermelon and pineapples. I am wondering what the occasion is. Usually this type of feasting is reserved for Ramadan. He squats to sit with us on the mat between my at mattress and that of the other boy. I get up.

The other boy scratches his red eyes. He looks at the food spread out before us like he was going to jump into the plates. Yesterday he refused to eat or drink.

Sheikh speaks to the boy kindly, in English. I don't know what Sheikh says but by the time he switches to Hausa, the boy is looking down like someone who has done something wrong. I hate the fact that I do not understand what has just been said.

'Please, let us eat,' Sheikh says to both of us.

I am surprised that Sheikh has even brought bowls with water for us to wash our hands in. Reluctantly, like a child receiving a gift from a stranger, the boy washes his hands and joins us. I am too shy to eat in front of Sheikh. He fills up the room and it is hard to breathe. He has never spent so much time here before.

'This fan needs repairs,' he says, 'it shouldn't make so much noise. Please remind me, Ahmad. There is someone coming to fix the one in my house tomorrow. He will fix this one too.'

He stares at the photo of Sheikh Inyass by my bed. I tell him it is mine when he asks. He eats some more before he starts speaking again.

'Have you ever heard of shirk? Do you know what it is?'

'Yes ya Sheikh,' I reply, 'it is joining of any other thing with Allah subhanahu wa ta'ala.'

'Interesting. And is that a good or bad thing?'

'A horrible thing, ya Sheikh.'

'Creating new things that are not in the Quran or Sunna.' 'Good?'

'Do we make photos of Allah subhanahu wa ta'ala?' 'Never, ya Sheikh. Never.'

'What of photos of his Prophet sallallahu alaihi wasallam?' 'No.'

'Do you know of the one thing that Allah subhanahu wa

ta'ala will not forgive?'

I remember the answer from Quranic school, and from my father when he used to speak against Shiites:

Allah forgives not that partners should be set up with Him, but He forgives anything else, to whom He pleases; to set up partners with Allah is to devise a sin most heinous indeed.

I feel ashamed. I remove the photo from the side of the bed, fold it and stuff it in my bag. Sheikh's gaze upon me is heavy. He is smiling and I can feel his eyes looking through my head and my chest for the things I am feeling and thinking. Suddenly, the food is hard to swallow and the koko is tasteless in my mouth.

Sheikh gulps down what is left of the water in his steel cup and rises to his feet. He turns to the boy and asks if he would like to go for a stroll after the morning prayers. He says it like a question but it is not really a question. It is the kind of question that tells you exactly what to do, in such a way that you cannot refuse or complain.

Pictures don't excite me the way they excite other boys. When they see a poster or a picture from an old magazine used to wrap kosai they gather round, pointing and laughing and staring as if their stomachs would become full by looking at it. Some of them collect bubble gum wrappers that have photos and show off when they have more than others. Pictures make me remember. There are many things I want to hide away in my head. I imagine that when you have a picture, the things become permanent and you can never remove the thought from your head. But sometimes I want to remember. It is why I keep this photo of Sheikh Inyass. I see it and the walls of Umma's room come back to me, when she still had words in her mouth and life in her eyes. That is the only memory I want.

I have just prayed asr. I climb onto the heap of rubbish outside the motor park and let the folded photo of Sheikh Inyass fall from my hand without looking. If I see where the paper lands I might be tempted to come back for it before the rubbish heap is set ablaze. It will be gone by evening.

The new boy is sitting on the left side of the low outer fence of the mosque, swinging his legs and playing with a long dry stick. He greets me with his eyes and continues striking the ground with his stick.

I feel a little jealous. Sheikh has never offered me food inside his of office before. I wonder what Sheikh has been telling him all day while they have been together. As I turn to leave, I ask him what his name is so I don't offend him by calling him something he doesn't want.

'But you can call me Jibril.'

He looks away. I look away, and walk towards our room.

Excerpted from BORN ON A TUESDAY © 2015 by Elnathan John; reprinted with the permission of the publisher, Black Cat, an imprint of Grove Atlantic, Inc.