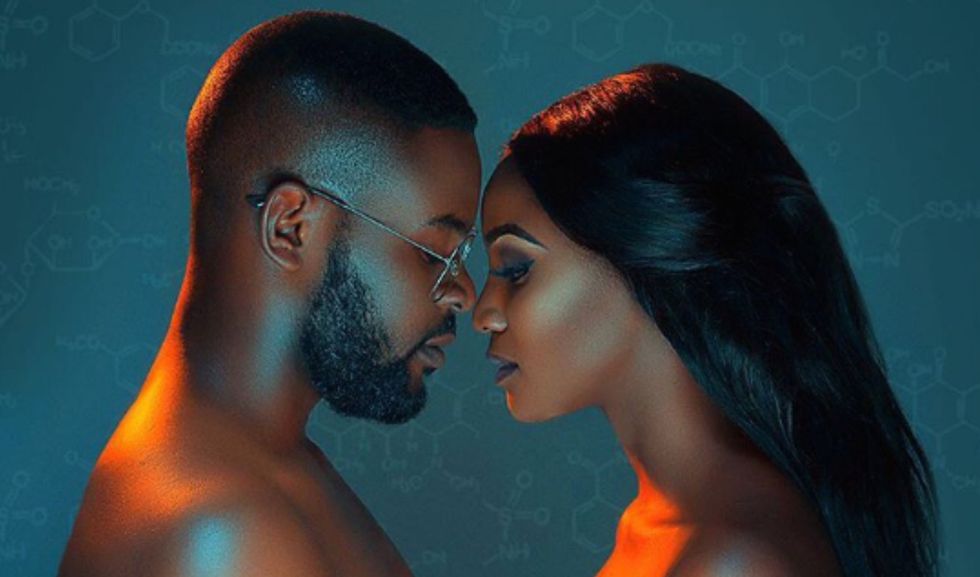 A typical Falz verse, if you haven't heard one by now, is an amalgam of Yoruba, Pidgin and English. It's fairly well written and solidly structured. Some of its charm comes from not just his wit, but also how he articulates it, incorporating phoney accents, Nigerian-isms and malapropism all done in jest. In this his most prominent forebear is Junior from Junior & Pretty.

"Chemistry" could easily have been hammy but for the earnest lyrics which pierce through speculations about their relationship: “everybody seems to think that we'll be good together/but they don't know if I'm your spec, oh/I don't need to know if I take your breath away.” Simi wants to proceed with caution but also hope of there being genuine feelings beyond mere attraction.

I've been resistant to Simi’s tiny voice for reasons that are now clearer to me. Her nice-girl-with-a-nice-voice persona is rather dull. But when she's a little caustic in her lyrics and uses more emphasis when deploying her voice, she immediately becomes way more interesting as a singer and as an individual.

That's said, you'd have to be without any redeeming qualities as a singer to fail on a song like "Shake Your Body," because the juju beat does half the job before a note is sung. The genre is a perennial favourite at owambe parties and usually accompanied by a dance that involves no more than a two step and wine—done better by grown folks with slower mobility and more grace.

Jester-Falz comes correct with just one verse and doesn't overstay his welcome. It's refreshing to hear a voice like Simi’s applied to a beat that has been traditionally sung over by men, as is evident in the couplet that closes the song which also has a winning pull quote, “Dangote come and spray me money.”

"Foreign" sounds very much like Falz’ idea for a song which Simi gamely went along with. It ridicules a person who claims a level of wealth and refinement that is clearly beyond them. It's also a big part of Jester-Falz’ comic routine and it's clear that he's mastered it.

The advent of trap has infused rap and R&B (and God knows what else) with more possibilities in vocals, sounds and marketing, than anyone I know envisaged. "Show You Pepper" is by now a hackneyed phrase loosely meaning to give someone a hard time. Sung or “trapped” over a slow, skeletal beat, Simi’s voice reaches the level of brilliance Jhene Aiko, her vocal-twin, reached on her break out EP Sail Out.

It's this toughness with which Simi threatens a jilting lover that piques one's interest and not her pleasant, inoffensive singing. Neither is there any slouching from Falz who adds a little oomph to a stale phrase like “show you pepper” when he rhymes it with “they say I'm a player, I go show you Pele.” Neat.

If afro-trap is now an accepted sub-sub-genre without an established figurehead, Falz is in there with a shout. There is less of Jester-Falz here and more of Serious-Falz who is dexterous at straddling a beat as he does on "Want To." He and Simi double up and trade bars on the second verse, a format that I'm yet to hear on any trap beat. Extra marks to Falz for the Salawa Abeni reference.

Anyone who rehashes afrobeat, as pioneered by Fela, must accept that it'll either be a good copy or a cheap alternative. Seun Kuti has dutifully inhabited afrobeat but not enough to separate his own sound from that which was passed on to him. Femi Kuti, the older scion, took a bolder step on "Bang Bang Bang" when he grafted electric guitar onto the rootstock of percussion that has defined afrobeat.

So rather than attempt yet another flash in the pan reinterpretation, Falz and Simi have borrowed a part of the framework—Tony Allen’s drumming, call and response choruses—to make "Cinderella." This is where Simi’s voice has an unexpected advantage. It works here chiefly because it isn't the rough male vocals we’re used to hearing in afrobeat. If Fela’s voice is a confident forward march, Simi’s own slinks and there's value in that because it survives on alien territory, taking the root where it is least expected to do so.

The beat on "Enough" is spatial, Simi’s singing is unadorned and the writing is uncluttered. The result is clarity. It is also the first time Jester-Falz’ comes close to being an interloper on a project that, overall, plays to the strengths of both artists. The song is about taking a lover for just what he or she is, warts and all.

Most of Falz’ material here is included in his repertoire as a comic-figure. He is a comedian but not an out and out stand-up comic. He's a rapper but isn't a professed MC. He's also the son of Femi Falana, a respected Senior Advocate of Nigeria and human rights activist, and no doubt comes from a certain level of privilege. For these reasons, consistently sending up other people’s poor grammar and pretensions to wealth and positions that eludes them does smell of condescension. I doubt this is his intention, but it reeks of it all the same.