Fatoumata Diawara: "It's Up to Us to Bring Africa to the World" 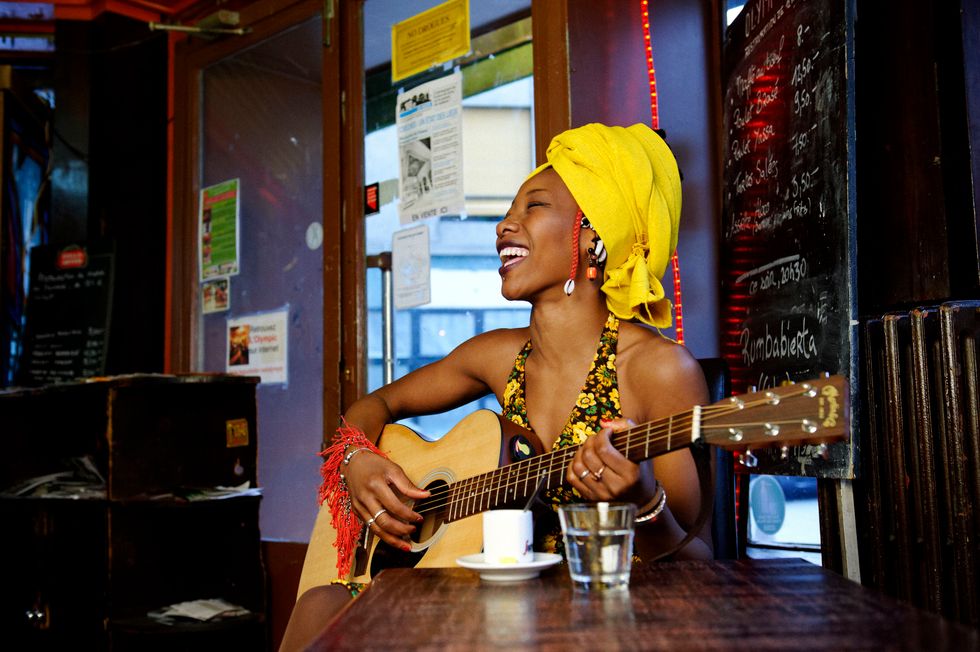 In a new interview, Fatoumata Diawara discusses adapting Malian music for the Twitter generation and her upcoming album.

“Tonight I will have to cry a lot. When I am alone later, I’ll cry for a long time” Fatoumata Diawara says, her gaze falling beyond the tinted car windows. “I’ve seen so much today, and it’s important to process these things and not keep them inside”.

We’re driving past Korogocho slum, next to Nairobi’s biggest rubbish dump, where thousands of people make a living by digging for scraps and survive through the haze of the ever-smouldering rubbish piles.

The night before, Fatoumata shared the stage of Safaricom Jazz Festival with Roberto Fonseca, the renowned Cuban pianist whom she collaborated with on his album, YO. Fatoumata contributes cool, poignant vocals to album track “Bibisa,” which perfectly match Fonseca’s riff and the West African instrumentation of Baba Sissoko and Sekou Kouyate.

“Music from Mali and Cuba are not so different, you know, and they work so well together” she says, talking about her ongoing collaboration with Fonseca, whom she affectionately calls “my brother.”

Today, they are visiting Ghetto Classics, a project which uses music education to get kids off the streets, and away from a life in the slums. Fatou and Roberto listen as strings, woodwind, percussion, and brass sections are woven together to create uplifting, hopeful melodies.

It’s not long before Roberto is sitting at the piano, and Fatoumata, standing tall in the crowd, looking regal in a red and white Maasai headwrap, is encouraging everyone to take part. “You can sing, right? I will give some lyrics, and while they play we are going to sing all together.” The result is a rousing, upbeat jam session.

We are supposed to continue our interview in the car, on our way back, but Fatoumata wants to know more about Nairobi after what she has seen. “I thought Kenya was rich, from the places I saw the last few days. I’m happy we came here.”

So I tell her about the different sides of this city, from $10 cocktails on rooftop bars, to the sprawling, chaotic yet brimming with brilliance urban slums, to the vibrant music and fashion scenes, and the street kids sniffing glue. She shakes her head: “it is not like this in Mali. Mali is less developed, but more equal”.

Fatoumata was born in Ivory Coast to Malian parents. Her refusal to go to school prompted her parents to send her back to Mali as a child, which she escaped to go to France at the age of 20 after her family tried to put a stop to her budding acting career. Since then, she’s become a globally-successful musician, and has continued to act.

It’s as an actress that I first set eyes on her, in Abderrahmane Sissako's haunting Oscar-nominated film Timbuktu. In the film, she plays a woman who’s publicly lashed for daring to defy the jihadist’s ban on music.

As the punishment is administered, she emits a wail which is at once terrible yet defiant, a cry of resistance and hope for her country. ‘No matter what, Timbuktu will remain,’ go the lyrics of "Timbuktu Fasso," a song from the film’s award-winning soundtrack.

In real life, too, Fatoumata sings about restoring peace to her beloved country. In her song “Mali-Ko” she brings together 40 of musicians from around the country to call for peace and unification.

Conflict is only one of the issues which she touches upon in her music, and themes like women’s rights and equality are a common thread in her songs. “In a place like Mali, where many people still cannot get an education, it’s important for musicians to talk about these kinds of issues,” she says.

Her songs, mostly sung in her native language, Bambara, are quietly hypnotic. It’s not necessary to understand the language to know that they carry a powerful message.

“Most musicians use their music as a tool to spread a message. Some sing about children, while others talk about arranged marriage or domestic violence; I think in Mali we are doing a really good job, as musicians, to change the way things are” says Fatoumata.

Music is more entwined with everyday life in Mali than perhaps anywhere else in the world. Through music, history and identity are handed down from generation to generation, love is declared and admonishments dished out. But because of the poetic and respectful tone of Bambara, the message of songs is sometimes shrouded in layers of lyrical riddles.

“I am trying to adapt my lyrics for the Facebook and Twitter generation, where everything goes fast."
“There are songs that I used to listen to when I was a child, and only now I can understand what they were really saying. They always have a powerful message, but it’s not immediately obvious,” she says. Instead, Fatoumata prefers to be direct about what she is saying, speaking clearly about the issues she is passionate about and wants to fix.

“I am trying to adapt my lyrics for the Facebook and Twitter generation, where everything goes fast; I don’t want people to have to wait five or ten years to get what I am talking about. That is the big difference between me and the older generation,” she says, before quickly adding “but both ways of communicating are good. Both ways are good, just different.”

It’s within her ability to stay close to her culture and musical roots, while at the same time being open to different influences, in which lies the key to her success. Her acclaimed 2011 debut album, Fatou, for example, merges the bluesy sounds of West Africa with contemporary rhythms, while her collaborations with artists as diverse as Herbie Hancock, Damon Albarn, Bobby Womack, and Roberto Fonseca demonstrate a real openness to different musical genres, free of national borders.

“These different collaborations are what have the most impact on my music: they are like a food for me. I am eating my own experiences. They are very, very important” says Fatou. “My music is from Mali, but it is not just Malian music. From each of these collaborations I learn something different, and they help to keep an open mind and create new sounds.”

This collection of new sounds will no doubt shape her new album, which is due to be released this year. Five years have passed since her debut, and since then Fatoumata has toured the world, acted in several new films, and become a mother.

“I am not the same person as I was back then, so this new album will be adapted to my life today and who I am now.” But it will retain its soulful beauty, she assures, and will be personal but outward looking, because Fatoumata still has a lot to say to the world.

As she leaves Korogocho, she tells the children that they, too, have a lot to say to the rest of the world: “every single person here has something to say. It’s great that you can read music, this is the key to your freedom. But you must use that freedom. In Mali, we call artists birds. The world is ready to hear your song and your stories,” says Fatoumata, exhorting the children to write their own music. “It is powerful, you know, playing your own music.”

"Who is going to be African for us? It is up to us to bring Africa to the world."
The words power and music frequently come up in the same sentence when Fatou speaks. She believes that culture can be a strong force in the development of her beloved continent, and that musicians can have a wider and deeper impact than politicians, without the violence. “Musicians also can kill—but we kill with our instruments and our voices, not with weapons” she says. “We kill hatred and division. With love we can touch the hearts of people. People don’t realize how powerful music is.”

As we are about to leave Korogocho, one of the Ghetto Classics musicians, a young girl who killed it with a clarinet solo during the jam session, stands up to ask one last question: “yesterday at your concert you were wearing African clothes, and today too. And your hair is so African too… Why?”

Fatoumata looks a little taken aback: “before people will love you have to love yourself,” she says. “Who else will do it if not us? Who is going to be African for us? It is up to us to bring Africa to the world. We have such beautiful things, such powerful things. But we have to know ourselves first.”