#FeesMustFall: Where Do We Go From Here? 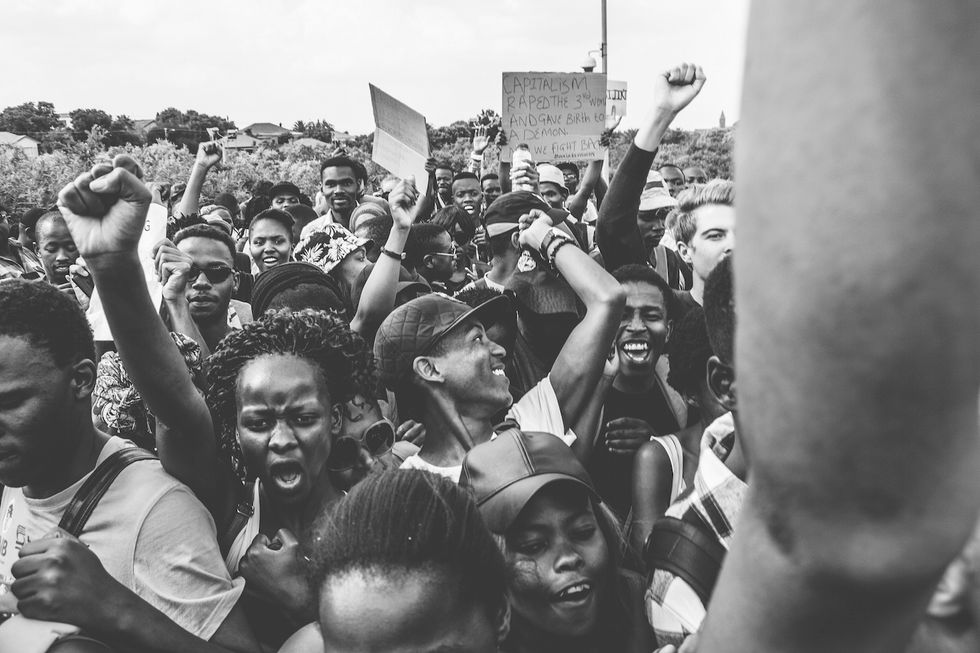 Photo by Kgomotso Neto Tleane. Students march from Wits to the University of Johannesburg on Thursday, October 22, 2015. Courtesy of the photographer.

In 1976, South Africa experienced one of the greatest student uprisings during the then Apartheid regime. Black students disagreed with being taught in a strictly Afrikaans medium, a language they neither understood nor with which they wanted to relate. Afrikaans was, after all, the language of their oppressors.

Although their protests were peaceful, police opened fire on the students, killing many and injuring even more. Images of police flogging, firing at and arresting students were forever impressed upon our minds and stowed away in the archives of our painful history as a country. Only three decades later, we bore witness to the rise of a similar student movement in a more modern era––the birth of #FeesMustFall.

The Fees Must Fall movement was formed by students in response to the 10.5 percent fee increase proposed by university management at various tertiary institutions across South Africa. After much campaigning to raise funds for financially-strapped students, the Student Representative Council (SRC) at the University of the Witwatersrand (Wits) conceded that such campaigns were unsustainable and would not constitute long term resolutions to the continuous fee increases that were financially crippling students already immersed in an ocean of student loan debt.

Once the protesting had officially begun, universities across the country were effectively shut down with access onto and off campuses being prevented and the academic calendar grinding to a screeching halt. These protests culminated in a historic march by thousands of students to the Union Buildings in Pretoria in an attempt to force the South African government to oppose the fee increases.

Victoriously, the president announced that fees would not be increased for 2016 as proposed by university management. The celebrations were short-lived, however, as student leaders felt that a commitment to fees for the following year only was again an unsustainable resolution to a larger crisis at hand. Student leaders also felt that owing to the support that the movement had accrued nationally, they now had sufficient leverage to hold the government at ransom and demand free education. Needless to say, the desire to continue protesting for a cause that now seemed too ambitious in the short term versus wanting to continue with the academic calendar resulted in a chasm forming within the student community.

Fast forward to 2016 and the Fees Must Fall movement has all but lost traction. It is no longer being spearheaded by the SRCs at various universities but has instead been hijacked by a handful of radical students whose actions seem to be fuelled by ulterior motives that are contrary to the spirit of the movement itself. Although tuition fees were not increased this year, as per the agreement of October 2015, the bone of contention lay in the inability of many students to pay their upfront registration fees albeit having signed temporary waivers of the fees earlier on this year. This then resulted in several incidents of violence, vandalism and most notably arson. Many have now distanced themselves from the movement entirely as they feel that it has morphed into an attempt to use the valid frustrations of students as an excuse for criminal behaviour.

Following a court interdict granted to the university, Wits prohibited the disruption of activities by any individuals with the threat of prosecution if found doing so. However, a mob of approximately one hundred and fifty students, the majority from external institutions and not Wits itself, entered the main campus and fired smoke grenades in the main library, forcing both students and staff to be evacuated. The mob proceeded to interrupt lectures and remove students from laboratories where practicals were underway. Fire extinguishers were removed from the greater part of the lecture theatres on the east half of the campus and subsequently used to vandalise the Senate House of the university, the building where the Executive Council and key student service offices are located. The mob then set a lecture theatre alight and dispersed before police officers arrived at the scene. Campus security was able to extinguish the fire, though it was too little too late.

Similarly, at the University of the North West (NWU), protesting students torched the administration building and science centre as well as a car. The students were dispersed by police with teargas and rubber bullets, though a considerable portion of the campus went up in flames.

At the University of Pretoria (UP) both students and workers were protesting. Aside from the demand to restructure fees and payment plans, the students also protested in favour of changing the university's language policy to being predominantly English as opposed to Afrikaans. The workers were demanding an end to outsourcing and seeking to be directly employed by the university rather than private companies. Emergency services were called in on several occasions owing to some students being injured. Similar events occurred at both the University of Johannesburg (UJ) and the University of South Africa (UNISA).

Just as the University of Cape Town (UCT) emerged from their own #RhodesMustFall, they too became embroiled in the violent protests of Fees Must Fall. There was a standoff between police and students as various art, paintings and busts of historical figures, were vandalised, a bus and pick-up truck torched and the office of the Vice Chancellor petrol bombed––fortunately in his absence.

A macroscopic view of the movement nationwide reveals tremendous chaos and a conspicuous lack of focused leadership. Those students who have taken it upon themselves to continue the movement in this manner seem to harbour ambitions of using the publicity of their actions as platforms to jumpstart their political careers in the motherbody of the political party with which they are affiliated at university. Others seem to desire being esteemed in the history books as 'revolutionaries' leading the biggest student movement of the century thus far.

Recent attacks, however, on feminist, queer and transgender students displayed the clear absence of directionality within the movement. The spirit of the original movement embodied diversity. It sought to bring together students from a diverse spectrum on the common ground of possible financial exclusion at tertiary institutions. It did not seek to exclude or victimise students based on gender, sexual orientation or background. Many feminists took to social media to express their disgust in light of misogynistic attacks citing how there was no room for patriarchy within a movement that had itself been the brainchild of female student leaders.

In addition, many politicians attempted to ride on the coattails of the Fees Must Fall movement in an effort to garner public support for the nearing elections. Many were curtly dismissed by students. Critics have suggested that the near anarchist nature of the movement is a deliberate attempt on the part of government to distract the public from more immediate issues, particularly with regard to the alleged corrupt governance of President Jacob Zuma. Furthermore, many feel that some students within the movement may have been deployed by the ruling party to specifically draw unwanted attention from the president, especially following the recent call for his impeachment. This holds weight as many of the protesting students are often not affiliated with the universities at which they are protesting and thus begs the question as to whether they are actual students to begin with. Case in point is alleged student and activist Vusi 'Old Man' Mahlangu who was purported missing following an abduction at gunpoint during the protests. Twitter was immediately aflame with #BringBackVusi in an effort to raise awareness of his disappearance and assist police in finding him. After only a few days, it was uncovered that Mahlangu had staged his own abduction and was subsequently charged with perjury and defeating the ends of justice.

Given the historical context of South Africa and that more than 80 percent of the population is Black, it is a huge injustice that thousands of students be denied access to universities on the basis of financial exclusion, albeit the fulfilment of all other academic admissions criteria. We cannot allow our academic institutions, spaces that encourage free thought, expression and questioning, spaces integral to any society, to become elitist. However, what the Fees Must Fall movement desperately needs is sound and focused leadership with clear objectives and realistic action steps. It needs student leadership without political undertones; leadership genuinely concerned with the student agenda. And lastly it needs leadership that will be able to discern constructive from destructive behaviour so as to reinvigorate public support and instil confidence in the valid cause for which this movement was born.

The road ahead for students across the nation is an arduous one. However, I feel because of the injustices of the past that have ultimately resulted in the current socio-economic status of the majority of students, that although the arc of the moral universe may be long, it will, it must eventually bend toward justice.