The Racial And Generational Politics Behind South Africa's #FeesMustFall Protests 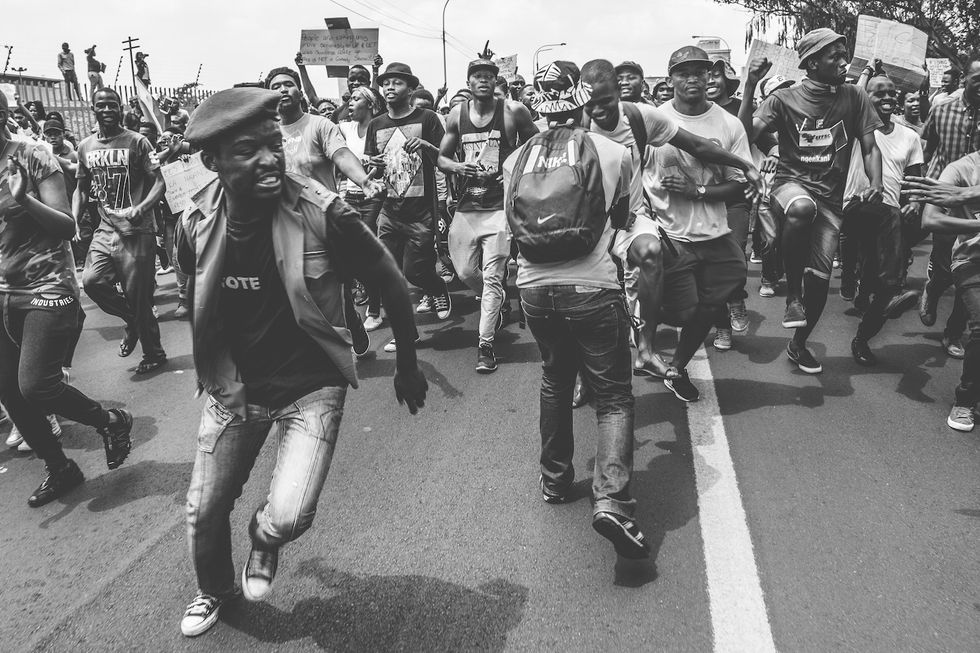 Last week’s images of South African students squaring off against police have brought Mandela’s famous edict to the forefront and, for many South Africans, prompted memories of 1976, the year of the infamous Soweto uprising.

Beginning at Wits University and spreading to over 20 universities across the country, students declared that #FeesMustFall in response to a proposed tuition increase at South Africa’s top schools. The standoff began after Wits proposed a 10.5% increase in tuition fees over the next few years, citing declines in states subsidies, the increasing cost of infrastructure and utilities, and the unstable rand.

Launching a full-fledged national shutdown, students blocked roads and entrances, sparking the suspension of classes at some universities.

A proposed alternative 6% fee hike by Minister of Higher Education Blade Nzimande did little to appease the frustrated students, who responded to the idea with boos and chants of “Asiyifuni iagenda yama capitalist"—we don't want the capitalist's agenda.

On Thursday, hundreds of students stormed the Parliament gates in protest before marching on Luthuli House, the headquarters of the African National Congress. The following day, South African President Jacob Zuma announced that there would be no fee increase for 2016.

But the fight for fairness is far from over. To understand where the student protests came from and where they are going we must address the complicated racial politics that undergird the national debate on tuition fees.

#FeesMustFall and #NationalShutdown were the largest protests in South Africa since the end of apartheid. While the protests succeeded in stopping the fee increase, they’ve also exposed the growing chasm between the “born free” generation and the ANC elite who spearheaded the apartheid struggle. Nearly two decades after white rule, rampant inequality persists, limiting opportunities for black South Africans to pursue higher education. Young South Africans are increasingly refusing to accept this reality.

Earlier this year, students took to social media to demand that a bronze figure of British colonialist Cecil Rhodes be removed from the University of Cape Town. In a spirited protest that included the popular hashtag #RhodesMustFall, an occupation of campus buildings, and even a bucket of human excrement thrown at the offending statute, black South African students signaled their frustration with the status quo of white supremacy.

In #RhodesMustFall and #FeesMustFall, students’ anger is well founded. At the 13th annual Nelson Mandela Lecture at the University of Johannesburg on October 3, renowned French economist Thomas Piketty noted that the top 10 percent of South Africans, a majority of whom are white, earn between 60 percent to 65 percent of total income—making it clear the black economic empowerment policies have failed.

Racial transformation in South Africa’s universities is happening at a snail’s pace. While blacks make up nearly 80 percent of the country’s population, they are less than a quarter of the University of Cape Town’s student body—and only 5 percent of its faculty. Moreover, the Economist notes that there are just 28 black South African female professors in the entire nation.

Confronting white supremacy means confronting the ways in which South African institutional structures continue to privilege white South Africans. Universities, the fulcrum of progressive thought, should be at the center of this exercise. Demographics should shift to reflect South Africa’s composition, but programs should be crafted in ways cognizant of black South Africans’ developmental and cultural needs. As Wits student Dylan Barryrecently noted in an op-ed for the Daily Maverick, “being intelligent [in South Africa] is not good enough if you are poor.” Especially if you are black.

Although the number of black students attending South African universities has increased significantly since the end of apartheid, educational inequality is deeply entrenched due to poor instruction and limited resources in townships and rural areas. While inequality is the product of apartheid, with each passing year, its explanatory power fades. Instead, South Africans increasingly look to poor government policy as a key factor in the ongoing racially-based income divide.

While critics cite the example of a growing black middle class as an example of progress, first-generation middle-class families commonly face the challenge of supporting their extended poorer relations. A disproportionate share of wealth and land still belong to the country’s white elite.

In protesting not only at universities, but also at the gates of Parliament, South African students have highlighted that the burden of changing the fee structure of higher education cannot only lie with the country’s universities—the government must also take responsibility.

As David Dickinson, Professor of Sociology at Wits University, notes: “the cost of studying at these universities outstrips the maximum funding made available by the National Student Financial Aid Scheme (NSFAS)” to the tune of up to R40,000 (slightly under $3000)—nearly one quarter of South Africa’s average per capita income. As educational subsidies decrease, universities are unable to meet the gap in cost of instruction. Even top universities like Wits have been forced to turn away as many as 3000 eligible students who were unable to pay.

Even as President Zuma grants the students a temporary reprieve from the fee increases, a weak rand coupled with climbing national debt and the threat of a credit rating downgrade hints that the worst is not over. A comprehensive strategy must be developed that takes into consideration the structural and societal dynamics that perpetuate cycles of black poverty.

Today, South Africa’s “born free” generation makes up over 40 percent of the population. Unlike older generations, the ANC cannot command born frees’ allegiance through emotional appeals based on the legacy of apartheid. As support for the ruling party slowly declines, its failure to deliver on its promises will be its undoing. The student-activists who have launched the #NationalShutDown are determined to force the South African government to turn its democratic dream of a rainbow nation into a reality.

Akinyi Ochieng is a writer and researcher of Gambian and Kenyan origin who studies the culture and politics of emerging markets. You can follow her on Twitter @kikiochieng or on her blog.