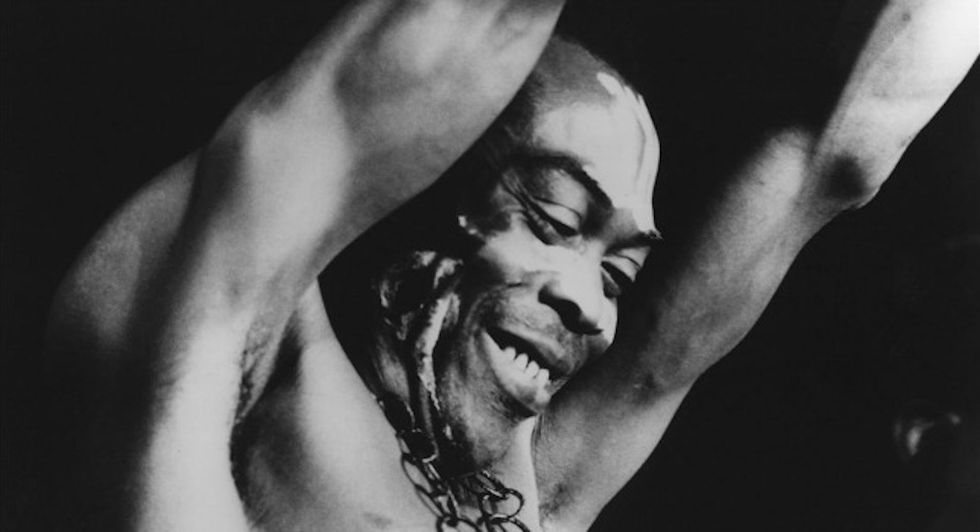 Fela Kuti celebrates on stage at the Shrine, Lagos.

Today marks the anniversary of the passing of Fela Kuti, the undisputed king of afrobeat.

Born Olufela Olusegun Oludotun Ransome-Kuti, the Nigerian legend was a man of many hats throughout his career: Afrobeat creator, proficient songwriter & multi-instrumentalist, political activist, art provocateur, Black President, and so much more.

To mark the occasion, we asked veteran DJ Rich Medina, who introduced an American generation to afrobeat through his Jump N Funk parties, to tell us what he thinks are the 10 Best Fela Kuti Songs.

Check out Rich Medina's selections and his own words about them below.

Rich Medina: The first Fela record I ever heard was “Let's Start." It was my first personal experience with his music, when I learned more about pidgin English, the story of Ginger Baker and his travels to West Africa, and his relationship with Fela.

It's just about the only time ever Fela was with a drummer other than Tony Allen that could still carry the sound of the original afrobeat rhythm. That spoke volumes to the notion of the collaboration—the amount of effort it took Ginger Baker to get to where he was in Africa prior to meeting Fela, and then making the Fela & Ginger Baker live album. It was a very big deal collaboration. Two mad scientists stuck together makes for a pretty ill track.

RM: Fela's lyrics really spoke to the negative actions of the colonizers. How all the colonizers across Africa always came, took what they could and ran off with it, without ever really truly paying for it. So, the notion of International Thief Thief is a case of universal law. Colonizers of the world stealing from the brown continent.

When you think about Fela's catalog, one of the most interesting things about this tune is that the vocals start practically right away with the hook. Most of the time, when you're dealing with Fela Kuti's music, you don't really hear any vocals for a good seven to eight minutes. With I.T.T. it starts off with the chorus which is a departure from his normal arrangement process.

Water No Get Enemy

RM: The record speaks for itself. It's universal law again, no matter what kind of race, color, creed or nationality you have, without water it's over. It's a major component of anything having to do with afrobeat or with conscious music. I've played the hell of out that record.

RM: It's a collaboration with Roy Ayers, so you have a coincidental, ubiquitous vibe player, songwriter, collaborator writing with the James Brown of Africa.

I'm pretty sure it was released around 1989. They were talking about how in the year 2000 all black people should be free. They're thinking towards the future and, even in the post-civil rights era in which Africans and African-Americans had a closer relationship, and there were all these laws created that gave black people a little more freedom in the United States, they were still not truly free.

RM: It's a record that I first heard on CD and MP3. It took me about four or five years to track it down after the first time I heard it, which was around 1993. It took me until about '97 to track it down. I got an original Nigerian EMI pressing so that record is very close to me.

Follow our Best of Fela Kuti playlist on Spotify.

RM: The military police in Nigeria were notorious for raiding Fela's compound, the Kalakuta Republic, on a regular basis, trying to find different ways to trump up charges on Fela. At one point, when they broke into the compound, they gathered up specimens of shit to inspect for traces of marijuana to try to find a charge. So Expensive Shit is based on that story. Later, when he was in jail, they waited for him to use the bathroom so they could test his shit as well.

RM: A quintessential track. The colonizers were supposedly trying to civilize Africans—the story was, you know, follow Christianity and be a gentleman. Fela said, “I no be gentleman at all, I be African man." The original man is not a gentleman, he's a man. The gentleman is the colonizer's notion.

There's a particularly beautiful bass line in that tune. It's strange, the lyrical content of what he's talking about really stands in contrast to how beautiful the rhythm section of the song is. It's a downtempo tune in the spirit of “Water No Get Enemy," basically breaking down what the “civilized" definition of gentleman is and explaining the difference between that and a true African original man.

RM: Another one of the most beautiful protest songs in the world. It talks about how all these other races and countries of people get their own names and their own denominations, but the African is always forced to follow the names of the colonizers.

The most incredible thing about it is that the vocalist of the tune is a woman by the name of Sandra Izsadore, who's an American. She basically left America with Fela when he came to Los Angeles, became one of his wives, and ended up becoming the lead vocalist for this tune. That was unprecedented in Fela's musical presentation, bringing a woman into the fold and having her sing as the lead vocalist. Because of her perspective of an American activist and her rationale, that gave her a particular level of power, Fela thought. —RM

RM: Again, it's Fela as usual sticking his finger in the eye of the system and saying that all these men working for the Nigerian military are working for the French or the English, all in an effort to shut down his voice. His voice which is gonna make African rise up, particularly Nigeria. The whole song is basically talking about how all these military men are zombies, just following orders, and not their hearts, their souls or their own vision. They're zombies and they've been hypnotized to carry out the will of the white man.

Musically, it's a highly-aggressive tune and a very dramatic song in the way that it breaks down at points and they have a refrain that speaks to dead air and open space, which leaves it open to the listener's imagination to think about what could be going on in the mind of a zombie.

Coffin for Head of State

You can really hear the pain and hear the sorrow in the harmonic and melodic sensibilities of the tune. Tony Allen and the rhythm section are in rare form on that tune. Because of the subject, you know, about revenge for the death of their leader's mother. You can really feel all of that in the tune. Everyone's mourning at the same level as if they lost their own mother.

Follow our Best of Fela Kuti playlist on Apple Music.