Fela Kuti's 'Zombie' Is Coming Out On Limited Edition 8-Track 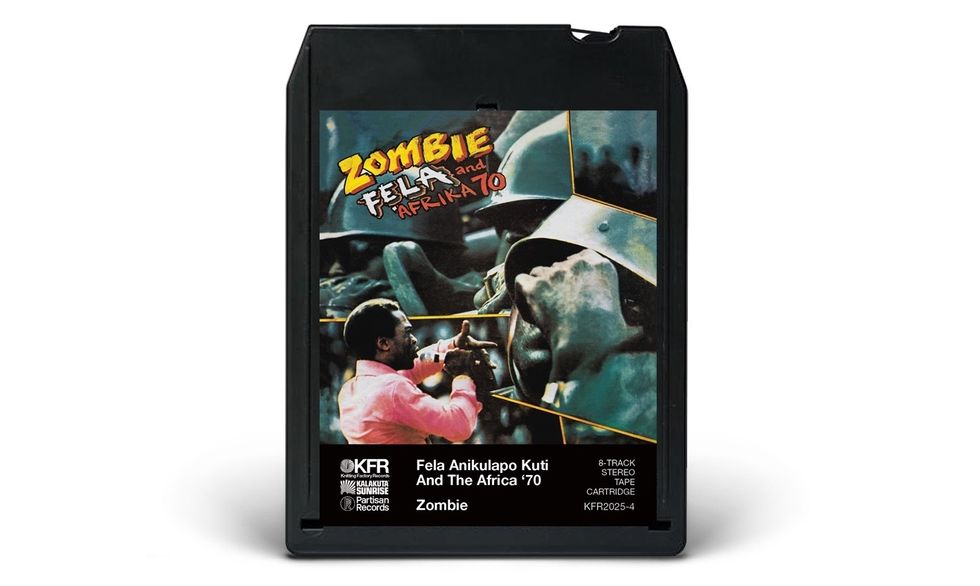 "Zombie," Fela Kuti's 1976 protest anthem and scathing attack on the Nigerian military, is getting an 8-track re-release.

Knitting Factory Records, Kalakuta Sunrise and Partisan Records have made 300 limited editions copies of Zombie/Mr. Follow Follow which you can pre-order now ahead of its December 7 release.

Fela Kuti's classic song uses zombies as a metaphor for soldiers mindlessly following orders. The song is thought to have triggered the Nigerian government's horrific assault on the Kalakuta Republic, in which the compound burned to the ground, Fela was brutally beaten and his mother, Nigerian feminist icon Funmilayo Ransome Kuti, was murdered.

You can pre-order Zombie/Mister Follow Follow on 8-track now and read more about each song from Mabinuori Kayode Idowu's text accompanying the release below.

Zombie: Fela in his life time was never 'a good bed-fellow' of the military institution. As a political activist, he believed the army should operate under the mandate of a civil government. If national interest compels the armed forces to intervene in government, the army is obliged to hand over power to a new civil government elected by the people and enjoying their mandate. To do otherwise is to usurp power particularly since a soldier's duty is not to seek a political mandate. For emphasis in the song, he narrates the military in motion comparing their orientation to the Zombie, without minds of their own. Fela paid a big price for this bold condemnation of the military institution. One thousand members of the Nigerian army attacked and burnt down his house after the release of the record. The tribunal set up to investigate the cause of the attack as a result of the public out-cry against the army, heard, as part of the evidence presented, an example of the Zombie album cover with the military uniform and boots displayed boldly. The army justification of the attack was that Fela treated the military institution with levity. —Mabinuori Kayode Idowu

Mister Follow Follow: Mr. Follow Follow is about those who allow themselves to be led blindly by others. Since nobody can live in isolation, Fela sings about those who follow with their eyes wide open and those who follow with their eyes closed. Saying if you have to follow, it is better to follow with your eyes and ears open. For if you follow blindly, you will always remain in the dark: '…if you dey follow them book! Na inside cupboard you go quench!…cockroach dey! Rat dey!…na inside darkness you go dey! If you have to follow them books, you have to read with some sense, see with your eyes and hear with your ears', he concludes. —Mabinuori Kayode Idowu