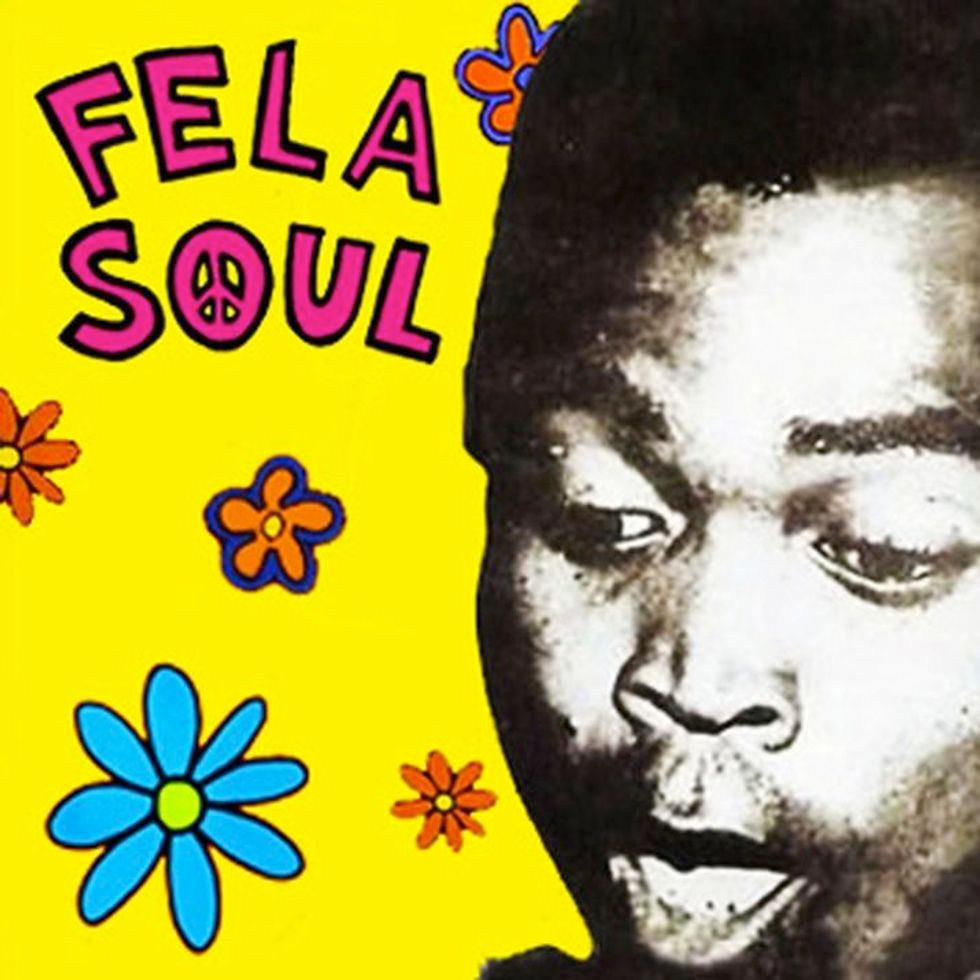 To celebrate the theatrical release of Finding Fela, Okayafrica takes a look back at the best Fela Kuti mashups.

'Finding Fela,' the new Fela Kuti documentary from Academy Award-winning director Alex Gibney, begins its North American theatrical run on August 1st. To celebrate we'll be finding Fela in our Okayafrica archives with a look back at our favorite Fela-related videos, galleries, remixes, interviews and much more.

It's no secret that Fela's musical influence runs deep. Yesterday we looked at how our very own Questlove and TV On The Radio's Tunde Adebimpe have cited the afrobeat father's influence in their own music and that of their peers. Today, as part of our Fela retrospective, we're spinning some of our favorite musical bridges that have married Fela's afrobeat with other luminaries. Rich Medina takes the pop route in his crossover mixes that pair Fela's percussive beats with The Beatles and Michael Jackson, while mashups from Amerigo Gazaway and Afrologic up the funk, hip-hop and reggae ante by remixing joints from Bob Marley, De La Soul and James Brown. Rounding out the list, Fela gets a contemporary pop treatment with dj100proof's slow burning Pharrell/Kuti mashup "Happy Mentality." And so without further ado, we present five of the best Fela mashups to hit the web in recent years. Listen on and keep scrolling for more details on Finding Fela's upcoming theatrical run.

Amerigo Gazaway's The Big Payback Vol. 3: J.B. & The Soulmates  is a 7-track collection that revisits and reworks 'The Godfather of Soul' himself James Brown with a number of other musical legends. On "Funky Black President," Gazaway crafts a powerful, brass-backed blend of JB and the afrobeat king Fela Kuti, with sprinkled verses from Jeru The Damaja.

Fela Kuti's "M.O.P. (Movement Of The People)" was the theme song at this year's Lagos Felabration which featured a performance from Julian Marley and his band, as well as Ky-Mani Marley. In this recently dropped remix, Lagos duo Afrologic pair the classic Fela track with Bob Marley's "Exodus," adding in some percussive accents and bounce.

Gummy Soul artist Amerigo Gazaway put together two towering greats in this 8-track, 33 minute, blend of afrobeat rhythms and hip-hop gems. The Nashville-based producer handpicked dozens of samples from Fela Kuti's illustrious catalog and combined them with 8 acapellas that span over a decade of De La Soul classics.

Rich Medina's "Fela Kuti & Michael Jackson 'Human Nature' vs 'I No Get Eye For Back'" + "The AfroBeatles 'Get Back' Vs. 'Colonial Mentality'"

Philly's own Rich Medina (who appears on this list twice) essentially invented the science behind the Fela mashup. With an entire discography to pick from, we thought we'd start with a sample of Medina's experiments with the King of Pop and the Father of Afrobeat plus his essential AfroBeatles project.

Seattle's dj100proof comes through with the inevitable mash-up of Pharrell's massive hit "Happy" with Fela Kuti's "Colonial Mentality" from 1977's Opposite People/Sorrow Tears and Blood. As dj100proof writes on his website, "I thought the shuffle tempo, driving bass lines and horns of Fela Kuti could provide a nice backdrop, so I chopped up his classic."