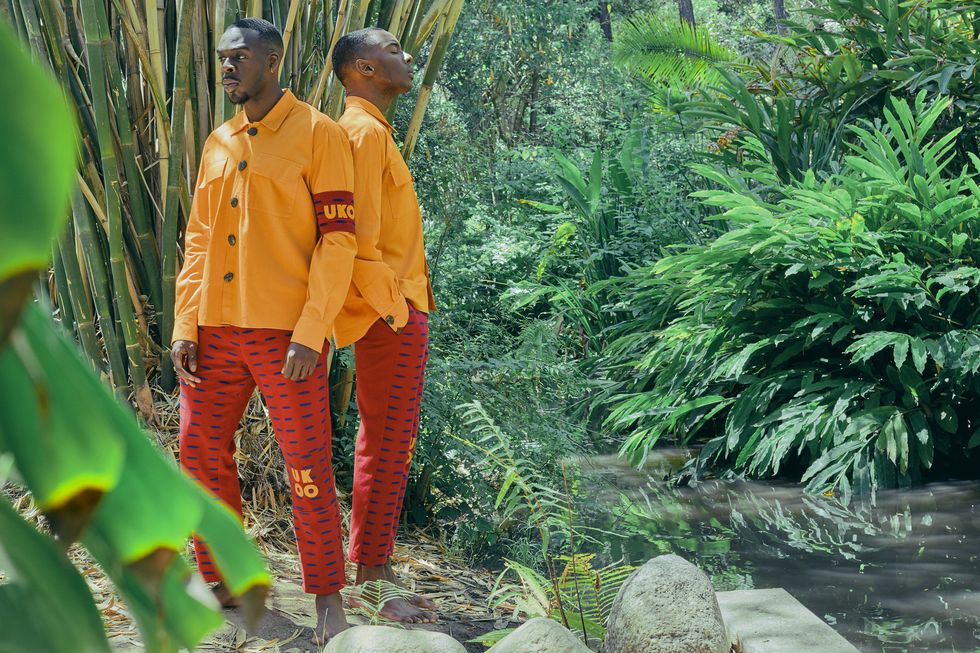 We get to know Will Edem and Mike Wamungu of UKOO Studios and take a look at their stunning inaugural collection.

UKOO Studios is a new fashion brand that's anchored in well-thought out concepts.

Made and based in Los Angeles, its co-founders, Will Edem and Mike Wamungu, have taken their love for research and documentation of their Nigerian and Congolese roots and produced a succinct debut menswear line exploring the meaning of introspection.

Collection 01 digs into the themes of consciousness, exploration, self and community through functional forms and compelling textures. The UKOO Suit is "the amalgamation of ancestral armor, meditative reflection and decadent modernism," the brand says on their website. It's comprised of three pieces—the Migrant Shirt, the Scarification Pant and the UKOO Armband—each making up what Edem and Wamungu consider a bright declaration of masculine vulnerability.

Before UKOO Studios launches the pre-orders of Collection 01, OkayAfrica gets to know the brains behind the brand and take a look at their color-rich lookbook.

Read our conversation with Will and Mike below.

Antoinette Isama for OkayAfrica: What inspired the creation of UKOO Studios, as well as the name of the brand?

Will: Mike and I are UCLA classmates, turned friends, turned family. We shared similar cultural backgrounds, thoughts on the creativity economy, and legacy. In fall 2014 we started workings as creative duo. In early 2017, there was a pivotal moment when we both started nearing a quarter century. We asked ourselves, "What's our role as storytellers to those who come after us, those standing with us currently and those whose shoulders we stand on?" In response, we felt an urgent need to put a body of work in the universe. We evolved and UKOO Studios was created.

UKOO is Swahili for "clan," with the synonyms: ancestry, family, lineage, prosperity, descendant. Mike is Congolese-American and I'm Nigerian-American. There's an estimated 1,500 to 2,000 dialects in Africa. Swahili is the most spoken African dialect. There's a unifying spirit in choosing a name from Africa's most spoken language. We always challenged our working relationship and creative output to showcase the balance and dichotomy of life.

You explain the brand is an 'extensive study of culture'—what is the brand exploring with its debut collection?

Mike + Will:Collection 01 explores themes of consciousness, ancestry and lineage, manifested into utilitarian silhouettes and vibrant pops of color that embody the pride and resilience of ancestors past; while communicating the dichotomy (and shared synergy) of the African diaspora—particularly between the years of 1957 and 1969.

The brand itself is an extensive study of culture—and those who shape it—expressed in textile form, hence the tagline "garments for the daring." Our north star is the question, "What stories can we tell through clothes? What can clothes mean to us?" That naturally leads us to ponder, "Whose stories are being told (or not told)? And what impact does that have on the zeitgeist?"

We chose to focus on the years 1957 to 1969 because they are pertinent years in our own histories, but also because they're perhaps the most important years in modern black, transnational history. Our references page explains why in more depth.

Have you both always aspired to delve into fashion? What professional backgrounds did you have before launching UKOO Studios?

Will: Since I was a youth, fashion was my preferred form of expression. My father was keen on presentation—dark colored suits, tucked in shirts, white shirts, and red ties when you need to communicate power—and I channeled that mandate and used style as an extension of self. I've designed merchandise but a cut and sew collection was always the goal for me.

At UCLA I majored in international development studies with an emphasis and cultural anthropology and political economics. Currently, I work as a strategist in the agency space. Research has always been an interest of mine. Throughout my life, I've found myself interested with the socio-cultural influences of creative works as much as the creative output. UKOO Studios is a summation of my coursework, research background approach to popular culture, design background, and style/wisdom from my parents.

Mike: I've always viewed fashion as an inevitable part of my journey. It was always a matter of when, not if. My mom instilled in me the importance of personal style and proper presentation at a young age. Style to me, is an extension of self. I didn't expect my foray into fashion to be this early, but time isn't a luxury we can afford to waste and there are more tools available to us now than ever so I chose to act now.

I majored in sociology and did extensive research in psychology and education while at UCLA. I'm a marketer in the tech space by day. UKOO, for me, is a natural amalgamation of those two worlds. In effect, we study culture and the human condition, but we operate like a startup. Fast iterations, lean methodologies and design thinking guide everything we do. I get to be an artist, problem solve and contribute to the culture all at once. Blessings.

Can you expand a bit on the concept of Collection 01's lookbook?

Mike: Conceptually, we wanted to anchor the lookbook in two themes: "A return to mecca" and "A dance with time." The lookbook finds us immersed in the lush greenery of a vast jungle. A young pair adorned in striking orange and cherry red stand pensively, their gazes demanding a regal deference, yet revealing an intimate, masculine vulnerability. What's brought them there is unknown. Tribal markings and bare feet hint at a potential pilgrimage. The jungle, all-encompassing and pristine, distorts our perception of time and space. These choices were extremely intentional.

I think so much of the afflictions we find in our world today stems from the disconnect we have with ourselves, our neighbors, our history, and our earth. We're inundated with so much noise and stimuli that we find it difficult to return to center. Yet, that return to center is so critical to healing (active, present acceptance of the past) and progress (active, present cultivation of the future). After asking ourselves how we could best visually communicate this sentiment, a lookbook shot in the jungle felt right, if for nothing else, for its proximity to nature, for its harshness, for it's resilience, for its beauty—a metaphor for the human condition and the spirit of black folk.

This combined with the intimate fashion in which the portraits were shot and how scarification photos were traditionally shot, is an attempt to invite people to look within themselves and across.

Are the garments strictly menswear or are there plans on expand to unisex/womenswear?

Mike: If we had to draw a box around the first collection, then yes it's menswear. The silhouettes and general aesthetic are more tailored for the male body. That said, we view clothes as vessels of expression welcome to all, so we're excited to see how women interpret these silhouettes unto their own bodies. Those interpretations will inform how we design the womenswear iterations of UKOO STUDIOS.

Womenswear is something we hold in very high regard, given that we'd be men designing for the female body. Before delving into that space, we want to better hone our skills and perfect our process. Part of perfecting that process includes deeper research, more listening and more learning from women. The world needs more of that. That'll ensure we do a women's collection the justice it deserves. It's about more than just clothes.

What's next for the brand?

Mike + Will: In the short term, we have a launch event happening in early December, which will coincide with the opening of our pre-order window.

In the long term, a film, a few talks, and museum exhibition. And of course, designing the next collection.