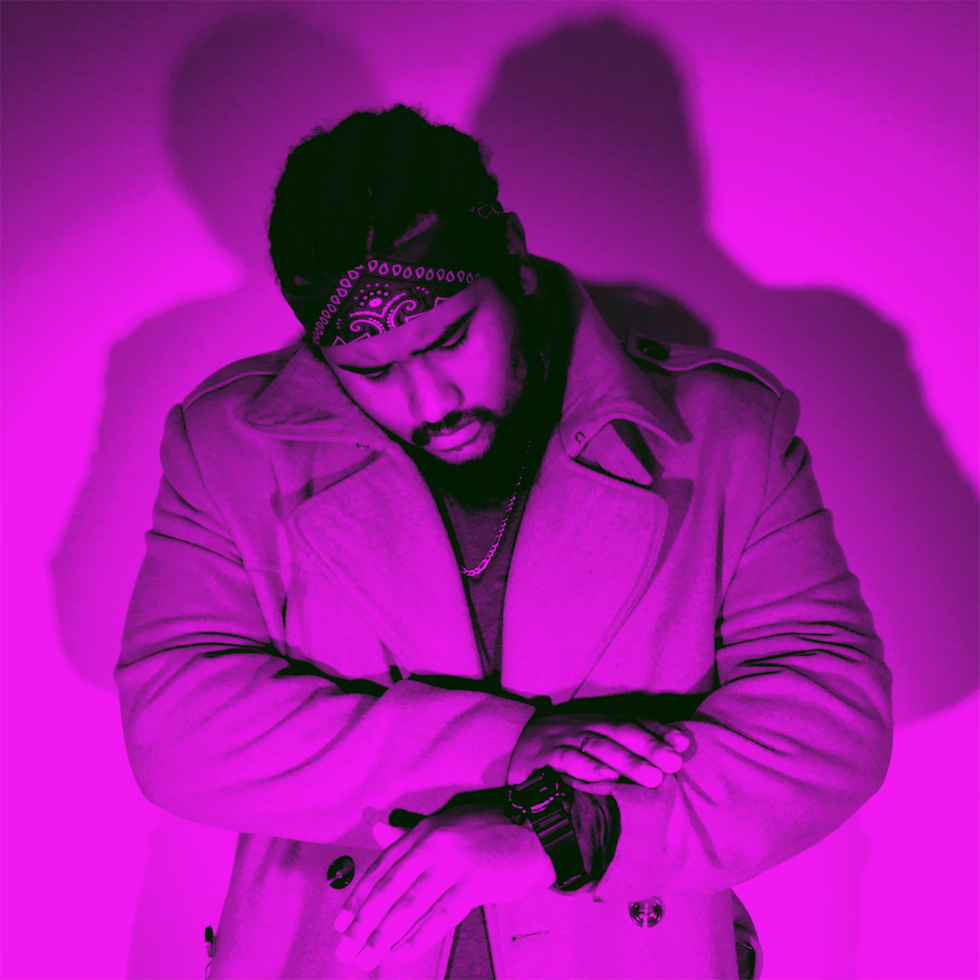 FonZo, one of the most prolific MCs in South Africa, back with 'Memoirs From The Night Show,' which we're premiering here.

He’s one of the most prolific MCs in the country and his collection of mixtapes and EPs forms a solid discography that lovers of lyrical rap would highly appreciate.

Projects of his, like theRAPy, Lucid Dreaming, The Pocket Change, Vol 1: Return of the Boss Don, will put your favorite rapper to shame.

The 24-year-old rapper, who’s from Port Elizabeth in the Eastern Cape province, has been based in Cape Town for the past five years or so, where he has managed to build a name for himself as one of the most respected rhymers in the city, making appearances on shows like Ipotsoyi, Mother City Live, Kool Out, among others.

Last year, we listed him among the most notable 25 under 25 South African rappers, and he appeared on our feature on the new era of Cape Town hip-hop in 2015.

His latest project, Memoirs From The Night Show, which we are premiering here, is a bit different from his previous ones. He passes his vocals through autotune and other distortions and filters, a style not uncommon in modern rap, admitting he's always evolving with the times.

FonZo is a producer in his own right, and handles the production alongside his longtime music friend, Eudy, who he has been working with since 2012.

In the Q&A below, the rapper talks about his evolution, why this project represents him more than his previous ones, his thoughts on South African rap, and more.

Take us through this new project.

I’ve always wanted to make a project that accurately represented my life at a certain point in time, lyrically and sonically, I don’t think I’ve done that thus far. That’s what this project is, and does. The sounds are influenced directly by what’s been poppin’ over the last two years, the subject matter is based on what what’s been poppin’ in my life over the last two years, so the concept behind this project is the name – genuine: Memoirs, From The Night Show.

What can you tell us about the cover art?

Major thanks to Alex van Rensburg for helping me bring the visuals to life. The visuals all had meaning to it. The flashing lights you encounter on evenings out are made up of predominantly primary colours, and this has been a recurring visual for me, hence the decision to go with these colours for the artwork of the individual single this far, and going forward.

Regarding the official cover art: the flowers represent women, the Jameson represents my vice of choice (you’ll hear many shout outs to my beloved whiskey throughout the project) and the Shisha (or Oka Pipe, to keep it real) represents the homies, it’s something that has played a social role in my life with my ouens since way back.

You’ve been working with Eudy since you came out, and on this project you even refer to the two of you as Weezy and Mannie Fresh. Why is it important to you to work with mostly with one producer?

I’ve always felt like the most cohesive offerings, always have a few producers. Don’t get me wrong, I’m a fan of many producers out here, that’s why I’ve taken to production again, I feel inspired, but most of my favorite artists have produced their most complete sounding projects with two or three different producers, rather than a whole bunch of folk. That’s obviously just my opinion, though, and as ever present with the bars, I carry my opinions into principle with my music, often. Hence it’s just Eudy and I on production for this project. The reason I feel it’s important, is because when you understand the producer you’re working with, and they understand you and your artistic vision, you can bring that vision to life the most accurately. One, two or three different producers will give you a better representation of your vision, rather than a different producer every beat.

Eudy is incredible, man. Genuinely one of the most talented producers this country has to offer. People might not believe those words right now, maybe not even after listening to this project, but one day, they will. We’ll make sure of that. He’s been my musical right-hand since the end part of 2012, and I doubt that’s gonna change anytime soon. The relationship we’ve developed with the music is becoming one that I’ve started to sit back and admire after the creative process is done, like, once I start mixing the tracks, I sit back sometimes like “Damn, this is beautiful. We did that? Damn.” A song like “Temporary Forevers” wouldn’t have been what it is without Eudy's immense talent, and boundless creativity. The strings and drums and percussion on that song are something special, heavily 808s and Heartbreaks-inspired, with a more modern twist—something I wanted, and he brought life seamlessly. Same with “20WW” and many other tracks.

Last year, you came out with a band, AKMG, and released a project. Any work from AKMG we should expect?

AKMG was more a collective of like-minded individuals, than it ever was a band. Whether you’ll see another AKMG release, well… time gone’ tell us that. Just wait on it.

This new project is more melodic than your previous ones (which is not a bad thing), you even admit it’s “more club.” Why this move?

There’s an ambivalence in you. You say you feel you are one of the greatest, yet you feel like more could be happening in your career. Where exactly do you want to see Fonzo?

I’m glad you picked that up. That’s something I want people to grasp. There’s two sides to us all, and I feel this project touches on both sides of me. The confidence is apparent on many songs, but so is the introspection and the unhappiness of where I find myself at, at 24 years old. I embrace both sides, and let them both live on this project. I’ve been featured in some major publications, had a couple TV appearances, had a number 1 song on Ms. Cosmo’s show [on 5FM]... I might be smiling when you see me, but I want so much more. We want so much more. Everyone around me. Never being satisfied is the name of this game, I guess. Personally though, I want to see FonZo on international stages flying the South African flag globally, with the team, and so much more. So much more.

What are your thoughts on SA hip-hop right now?

We’re at the forefront of mainstream music for the first time in, like, ever. Well, in my opinion at least. Every other advert, whether it be sport, telecommunication, insurance, food, liquor so and so forth, has elements of hip-hop embedded heavily within it these days. This is a very good look for all of us who love this hip-hop thing. There is still so much room for us to grow, though, and I can’t wait to see what the future holds. Something I’ve been ever vocal about for some time now, is that I feel we need to quit the inter-provincial battles with this music thing, this is not an under 18 rugby tournament or whatever, this is music. Music appeals to all. The internet is on our side now, too. Why should we battle per province, when we can combine and take our music to the globe? Why are we so stubborn, man? I guess coming together is way easier said than done, though. I feel Cape Town itself is already so disconnected musically, so coming together as a country would be infinitely more difficult, especially with hip-hop and its competitive nature. All of that being said, I’m still genuinely excited for what the future holds for us, man. For real.

It’s possible to have a rap career with mostly singles. But you seem to be a body of work kind of artist. Is this a conscious decision? Is there a theory of some sort behind it?

Definitely a conscious decision. I grew up in an era where the general consensus of the people who were poppin’ at the time was, “If the album is whack, the single don’t matter.” I just feel like due to the quality of the bodies of work being put out at the time (2003 to 2010), that’s probably what the general consensus was. Only with the advancement of digital distribution platforms, which equated to easier access to music, did that statement change. Everybody had to prove their weight with a body of work. And I feel I still have to do that, every time I set out to make new music, pretend it’s the early 2000s.

Watching a tutorial and making beat that sounds like everything else that’s popping these days isn’t too difficult. Making a body of work that can stand the test of time is a completely different thing, and always will be.

I’ve been hardwired to make musical offerings, over standalone singles, and I doubt that will ever change.

On the song “Scotch Talk,” you rap: “Then I think of my city, I’m talking PE./ Who can we be proud of that touched the country?  Hayi mani, don’t say iFani/ Respect and love, but I’m hardly/ impressed with the list that we have/ People make it out and act like mystery mans/ That’s probably ‘cause we don’t get the support/ Shit, I could be wrong, I’m just venting my thoughts… Scotch sippin’.”

You are expressing your disappointment in the Port Elizabeth hip-hop scene, if I’m hearing you right. What’s up with that?

Keeping it all the way 100 emoji, Port Elizabeth genuinely doesn’t have someone carrying the torch for us in terms of hip-hop in this country right now. Correct me in the comments if I’m wrong. I’ve been vocal about my love and appreciation of the city for so long now, and the support just isn’t there, I feel. Not just for me, but I can only speak from my perspective here. Chances are, I’m probably just not pushing my music through the right platforms to touch folk’s ear on that side, but yeah. I’m not part of the scene in PE either, so who am I to comment on it as whole, you know? I’m not there, but on the contrary, as a consumer and fan of hip-hop music, I really don’t know who’s poppin’ that side either. So clearly there’s a disconnect. Again, I could be wrong, I’m just venting my thoughts. It’s always love, though.

If you hear some voices that are not mine on some of the music, those belong to Kiiing Leoand Von Leigh, two crazy talented artists in their own right, for their background vocals on the various songs they helped with. I feel some of the joints really wouldn’t be complete without them. Eudy himself popped up on some ad-libs and vocals too, so shouts to him. All these exact credits are on the back cover.

Lastly, to the people, do enjoy the project.

Love it, hate it, criticize it, praise it, do all of that for The Don. As long as you give it your ear, I'm happy.

Listen to Memoirs From The Night Show below, and download it here.