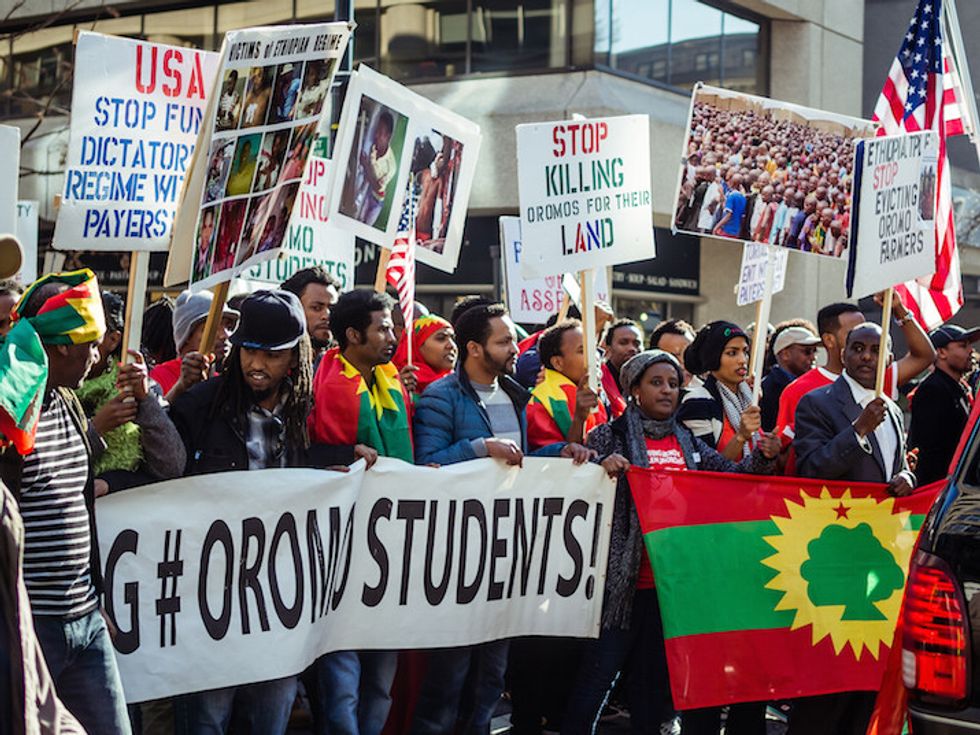 Several dozens of people have been shot dead by police during peaceful protests that took place over the weekend.

Oromo Media Networkhas released footage that shows Ethiopian security forces using excessive force against peaceful protesters, letting off rounds of tear gas and beating them for raising their voices against what they say is excessive government censorship.

At one point in the video, shot from what appears to be an upper floor in a neighboring building, police yanked and dragged a protester out-of-sight into a dilapidated compound. Another protester is seen cowering against a wall as two police officers take turns beating him.

The Ethiopian government has blamed the anti-government protests that have resulted in several dozen people—some sources are saying up to 90 people—slaughtered by police on “foreign-backed forces,” according to Amnesty International, which is ironic considering the country is a close security ally of the West that touts the idea that internet access is a fundamental human right.

This brutal clash between police and protesters continues a series of unprecedented uprisings since April 2014 among the Oromo, the ethnic group comprises nearly 50 percent of Ethiopia’s nearly 100 million population, who have alleged that they’ve been subjected to land dispossession, marginalization of their culture and high youth unemployment. A development plan that involved expansion of the territorial limits of Addis Ababa into nearby Oromo villages and towns initially provoked the civil unrest.

Last month, the Ethiopian government disabled access to the internet during an exam period that was postponed after pictures of an end-of-year university exam were leaked on social media.

The government blocked the internet again last weekend in an attempt to censor coverage of protests in the Oromia and Amhara regions. Footage of the crackdown has nonetheless spread online.

To learn more about the situation on the ground, watch the AJ+ video below:

Police are responding violently to protesters in Ethiopia.https://t.co/A0bf9o29dR