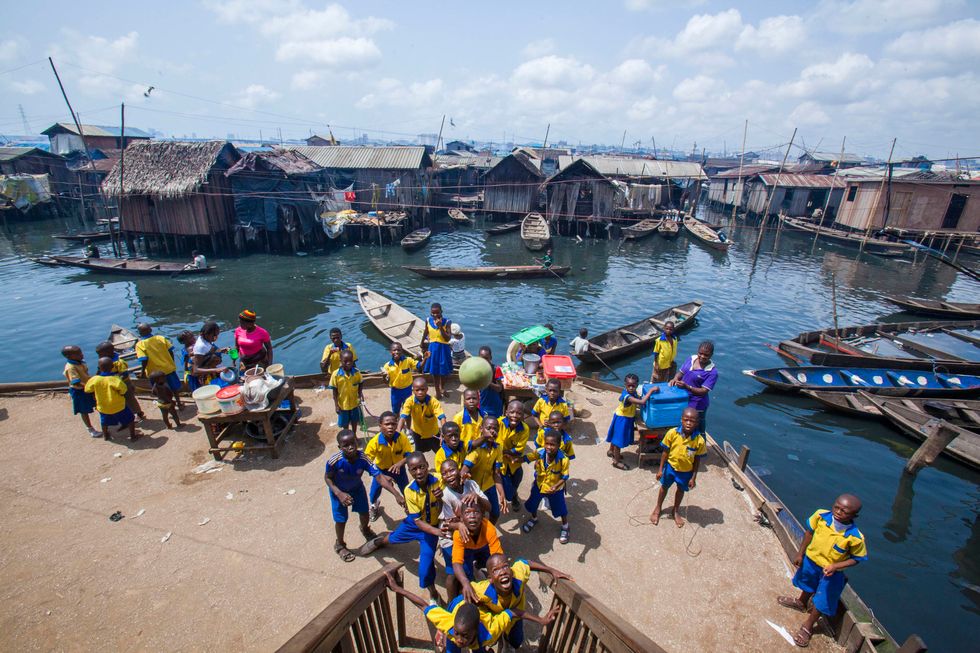 Andrew Esiebo is a photo documentarian known for his explorations of Nigerian life. His work can be critical of social ills—scathing even—but just as often his images are celebratory and joyous making his stories both rich in meaning and a pleasure to look at.

These days Esiebo is in high demand. He's currently doing commissions all over the globe including a project with the World Press Photo Foundation in Uganda. In New York, you can see selections from his Alter Gogo project—the Grandmother football series—as part of the excellent group exhibition “Who shot sport" at the Brooklyn Museum.

Esiebo's images of Nigerian football pitches share the celebratory aspect of his Lagos nightlife series— which was recently featured in the New York Times. There's also a connection to the masculinity and gendered spaces of his barbershop series. But—as we found out—underneath these images of athleticism and play are strong criticisms of power and how it impacts public space in Nigeria. We caught up with Esiebo in DC to talk about his work and how football can repair rifts and restore community.

Is this your life now? Constantly touring around.

(Laughing) It's been like this for a while. When I get back home I need to go to Burkina Faso and then to Kenya.

What kind of work are you being commissioned?

I have done all sorts of commissions but mostly with a creative documentary approach. So Burkina Faso is where I'm photographing an exhibition project next year for the UK. They want me to do a series of portraits around farmers in Burkina Faso. In Kenya, I'm going to be a masterclass tutor for students through World Press Photo. Those are the things keeping me busy for now.

Pretty cool stuff. I read that you grew up in Lagos. Can you tell me more about the neighborhood where you grew up?

I was born in Olodi Apapa, Lagos. It's quite close to the popular Ajegunle area of town. It's a working class neighborhood. I was raised there until I was 13 years old, and then I moved to Ibadan, which is about 140 kilometers north of Lagos. There I continued my life, my studies. I studied at the school of journalism there but I would also come into Lagos frequently.

So, when you were 13 you were living in the heart of the most populated city on the continent, then you move to—I don't know what Ibadan is like but I'm assuming it's a little less hectic. What kind of impact did that have on you?

When I got to Ibadan it was a shock. I grew up used to living in a space where life is on the run, everything you do you just keep running. Even when you take the public transport you have to run for the bus. You have to run to get it, because the next guy is going to get your seat if you don't move.

Ibadan is a much more laid back society. I still have this memory of my uncle in Ibadan—who I was living with—heading to church in the morning. He flagged a taxi. In Lagos you run after the taxi, but in Ibadan the taxi comes to you. I was trying to run toward the taxi and my uncle said "No you have to wait, we don't run. The taxi is going to wait for you." I was a bit embarrassed because I got used to this lifestyle where you have to be on the run, because they next guy's going to take your turn.

Ibadan was difficult at the beginning to adjust to, because I was used to this vibrant lifestyle, mixing with people. Over time I loved that lifestyle because I saw myself relax more, but still I was always connected to Lagos.

As an adult and an artist, do you run for the taxi or does the taxi come to you?

It's in the blood. As soon as you get into Lagos, this energy comes to you—when you arrive at the airport, you become part of that system of high-spirits—always on your toes. Never losing your gut. Keeping your eyes open because you don't know what the next guy is going to do to get over you. It's always there. When I was in Ibadan I was always connecting with those guys from Lagos because we kind of had similar spirit in a way.

Is there a difference between how your work is received in Nigeria and outside Nigeria?

I don't think there's an attempt to evaluate it differently. The key thing is to always tell stories. For me, every form of storytelling is art. What makes the difference is the method. For me, I'm comfortable to say my work is an art piece. My method is documentary. I think for every work it's "What are you saying? What is the story? What issue are you addressing?"

I think it's a subconscious reflection of who I am. I always find myself evolving in that similar line. It's not really like I go out doing that. I put on my intuition and just drive through that. I see myself revolving around those similar issues. For instance, Lagos parties can be easily compared to the churches in Lagos. Even though I never planned to compare them there was this similar theme of people battling together for relief—for something positive in their life. It's a reflection of my position of the world, of my society.

What sparked the series "For the Love of It?"

The whole idea was to go out and look at the various manifestations of soccer in our society. I realized I was always drawn by spaces where people played the game.

That was the starting point, to document the spaces where people played the game. In spending time doing that I realized it's played in very different spaces, mostly informal spaces—on the streets, in the market. I was interested in how people appropriate their space because of the passion for the game. Then the question became why are people always playing in these informal spaces?

I was inspired by a conversation with a little kid playing on a very hard surface. I asked him "Why are you playing on this floor? It's so tough. It's so small." He responded, "We love to play the game, but there's not enough space for us to play. This space has been taken over by the big guys." That really struck me.

If our cities have been planned well, we would have enough space to play the game. That's why people are taking the risks to play under tough conditions. The project looks at the passion, at urban planning, and our failure. Also showing open spaces and different spaces which we have around Nigeria and the continent of Africa.

There's a trend in urban planning—especially when talking about Lagos—to celebrate the informality and the way people build markets and sell on the streets.

I agree. It's also about informality, but I think it's also important especially in 2016 when there are new communities being built. There's an area called Lekki which is more like a rich neighborhood. It's not an informal place. If you go around you rarely will find open spaces for people to enjoy recreation.

The other day I was talking with a friend of mine and she wanted to take her nephew out for a walk in this community. She asked them "Is there any park around where I can take my nephews?" And they were like "well we don't have parks." These are spaces where you have big houses. People always build big houses for themselves without thinking about open spaces where everybody can come together to enjoy and to play things like soccer. So it's true the informality is part of the society but I think it's also important as we build new cities to think about green spaces as well. Not just creating the concrete jungle.

I'm assuming Lekki is made up of compounds with concrete walls. Is that correct?

Yes. Exactly. Which is unfortunate. It's just so dangerous for the future.

What do you think that says about Lagos? That there's this struggle.

Can you tell me more about that place?

Festac Town was built in 1977 to celebrate the black cultural festival. It's a huge estate. It has over a thousand apartments built to promote community. So each block has a park and that park is where people come together as one, to enjoy. Of course, these parks have now been used for something else, but the good thing I've heard is that some people are reclaiming these parks that have been used for something commercial. There's one place I went to in Festac Town—they named it Victory Park, because it had been used for an auto garage. The community had a long legal and physical battle and the park was given back to the community. You find some places trying to recover their community but unfortunately communities are broken. You find people living more individual lives.

Taking this metaphor of the football pitch representing community on a micro-level, does that translate to the Super Eagles? Does the national team represent a bigger communal coming together?

Oh yeah! Football represents a rallying point for Nigeria. Because in Nigeria, people don't identify as Nigerian, they identify according to their ethnic group. The only time you see people saying I'm born in Nigeria is when it comes to football.

Yeah yeah. Football is fundamental to the unity of Nigeria. That's the only time we put aside our differences and become happy as one nation—especially when we win the game. So yes, football is a metaphor for the bigger community of Nigeria.

So, given that football represents Nigerian unity what are the prospects for football success and Nigerian success going forward.

If you applied the philosophy of the game—the team spirit—to Nigeria, it could be a great nation. Team spirit in the sense that when we work together despite our differences to achieve a common goal we will be a successful country.

Football is a brand that has projected Nigeria internationally. I go to some places and when they reference Nigeria they say, your country is a great country for football. They remember the Olympics of 1996 when we won the gold medal. That's one way we can boast of our success as a great nation. Football is a very powerful tool.