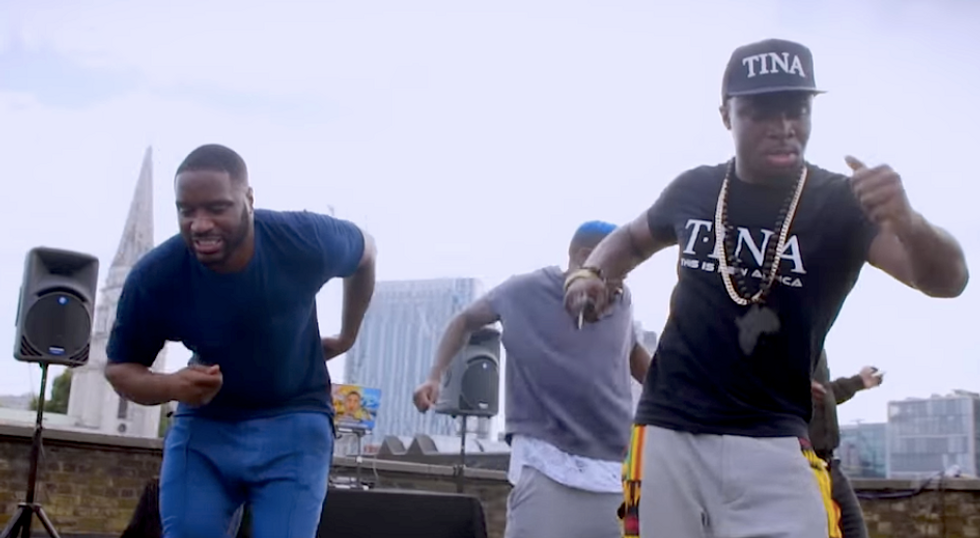 It flows off the tongue so easily and worms itself into your memory. It's the perfect hook for a dance track—and that's exactly why it became one.

The accompanying Jinja dance was shaped by a bunch of friends having fun together in the studio while the song was being created. "Everyone was just having a great time," Fuse ODG tells Okayafrica. "My dancer Selasi was making different dance moves for it. We were like, 'Yo, that looks like a sick dance!' So we all started doing it. It was just a natural vibe."

Simple as that. It's how dances are made, at the party, so why not in the studio too?

Dance has been central to Fuse's rise.

When he first blew up, it was for "Azonto" in 2012, a track named after the Ghanaian style of music he introduced most of Britain to. That sound revolves around the azonto dance, a sort of knocking of the knee. He took the formula and ran with it, following up quickly by dropping "Antenna" the next year, which became its own viral dance challenge.

The people love a good challenge—just look at the Running Man and the TZ Anthem, both wildly popular, and that's only in the past few months from just one country. But Fuse has been reluctant to follow a dance to success again. Who wants to be known for doing the same thing time and again anyway? "I always said I wasn't going to get involved in any more challenges unless it's a life-changing situation," he recalls.

The #JinjaChallenge, which he launched this week, is indeed for a meaningful cause. He hopes to use a challenge's viral ease as a way to spread the word about and raise funds for a new school in Ghana.

In 2007, Fuse got involved in a project alongside the Woodworld Mission charity, helping to raise funds to build a primary school linked to an orphanage for hundreds of kids in Akosombo, a small town in the Eastern part of the country. That opened in 2011, but the kids need a secondary school.

Enter the Jinja. The best video #jinjachallange entries are uploaded to his Youtube channel, and then users vote on their favorites in the comments section. But in order to vote, you first have to donate. The process is detailed in the info section of the video above explaining the charity. The goal is to raise £250,000.

The Jinja dance was first introduced to the public when the video for "Jinja My Ninja" dropped in October. A couple people had alreadyuploaded dance videos to "Jinja" before he even announced the challenge. In case if you need a tutorial, one is included in the example video for entering the challenge. Basically, it's a couple small steps left and right with accompanying low hand waves, then the steps get elongated and more energetic. (Hence the name jinja, a word—which the video explains—means to get someone excited, especially through dance.)

The first entry was uploaded a few days ago, a slickly produced and fun video by HomeBrosUK. For a challenge, the steps required for involvement are a little exacting. They include downloading different parts that need to be edited into a video. But if people will film themselves dumping a bucket of ice water over their head, ostensibly for charity, then it shouldn't be too much to ask.