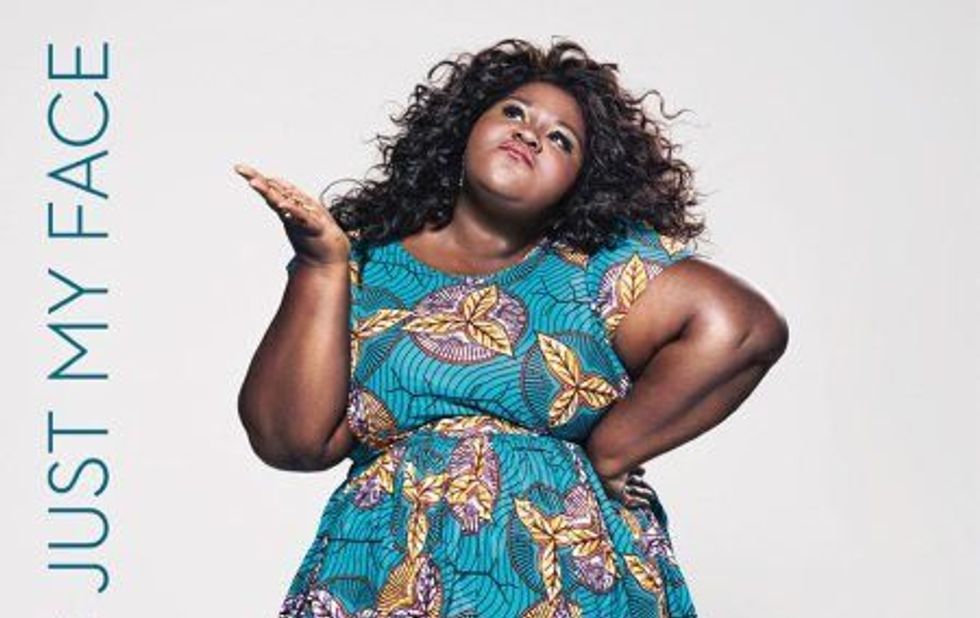 "This Is Just My Face: Try Not to Stare" is the upcoming memoir from actress Gabourey Sidibe. The cover was released today and it looks great.

Gabourey Sidibe (or Ms.SidiBae, if you’re nasty) is releasing her first book in May of 2017, entitled “This Is Just My Face : Try Not to Stare .” The cover art was released this week, and from the look of her African print dress, glowing skin, fan-blown hair, gold-copper converses and confident as fuck pose, I can already tell the book will be lit.

Ms. Sidibe is known for her stunning portrayal as the title character in the movie Precious, for stepping into the dark side on American Horror Story and for playing the witty, idea-driven Becky on Empire. She’s appeared in Lane Bryant’s gorgeous “This Body is Beautiful” campaign and has used her platform to spread body positivity and black girl magic to the masses. Now she has a new book underway, so we can finally read some of her hilarious and honest thoughts and ideas.

Of course, we knew she could write—she recapped Empire episodes on Entertainment Weekly—so I’m not surprised that she penned a whole book. Yet, her memoir will be something special: we have books from Lena Dunham, Tina Fey, Mindy Kaling and Issa Rae, but we need more books from full-figured women of color whose perspectives are usually ignored or underrepresented in society.

Throughout Ms. Sidibe’s career, her weight and skin color have been topics for discussion—in media and online. In 2014, Twitter trolls hated on her Golden Globe outfit, last year social media made fun of her love scene on Empire and if you Google her name, you’ll find that some news outlets are more interested in how many pounds she weighs instead of how many movies and TV shows she’s been on. Generally, women are judged by our looks over our brains and abilities, but this judgement is taken to a new level when a woman has a figure that society deems unhealthy and unattractive. Apparently it's a problem when a woman is happy with her gorgeous, voluptuous, dark chocolate dipped body.

But Sidibe has always had the last laugh in these situations. Her clapbacks are classy and comedic: in the case of the Golden Globes hateration, she tweeted: “To people making mean comments about my GG pics, I mos def cried about it on that private jet on my way to my dream job last night. #JK.” And in her Ms.Foundation Gala speech, she addresses the absurdity of interviewers asking her where her confidence comes from. “I hate that. I always wonder if that's the first thing they ask Rihanna when they meet her... They ask me with that same incredulous disbelief every single time. ‘You’re so confident! How is that.’”

The joke is really on us. Why should fat women be congratulated for their confidence? Society is actually in the wrong, for continuously putting them down. As a society, we need to change our perspective. That includes all of us—maybe you haven’t made fun of a fat person, but if you don’t stand up for them in times of bullying, if you have internalized disgust over larger bodies, that’s a problem too.

And once again, she has the concluding cackle, the final snicker, the ending giggle. While some of y’all are still hating on her body, still wondering when she will be a size 4, still getting mad when you see her on a new show, Sidibe is coming out with a book and collecting even more checks. It’s as if haters are the ones pumping her bank account.

I hope to read more stories of realness in “This is Just My Face.” Sidibe has a lot to say, and I’m looking forward to hearing it. And if people have something sly to say about her book— like, I don’t know, the font is too big, the pages too wide, you know how society be—then I will happily get in formation and think of a clever defense against their ridiculous comments.

Watch the behind the scenes video of her shoot below:

Alisha is a Brooklyn-born writer, tea enthusiast, and lipstick babe who loves creating all-natural potions for her hair and body. Her writing focuses on race, gender, body, beauty, social issues, and pop culture. Follow her on Twitter @FuFuFeminist and on Instagram: alisha.acquaye