An Apology is Not Enough: Germany, Genocide and the Limits of Reparations for Namibia 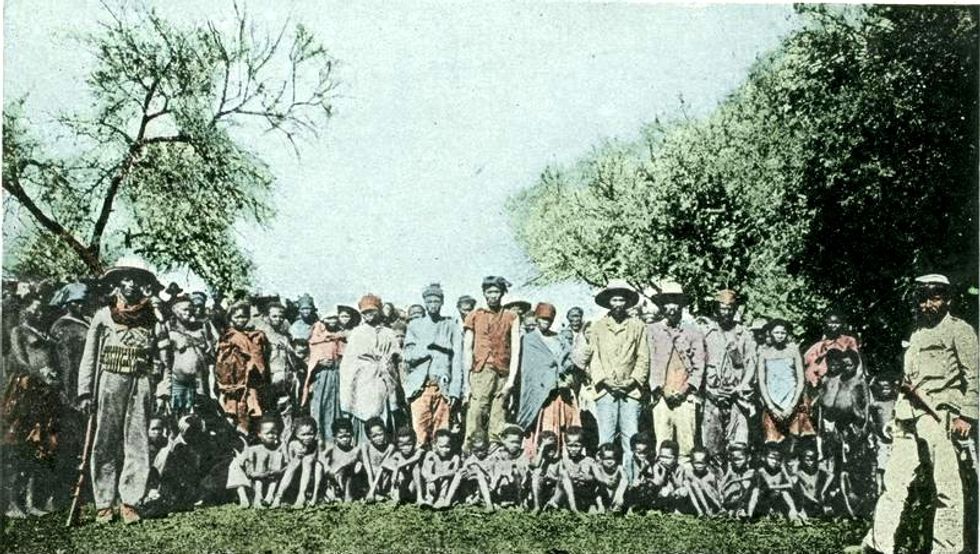 After more than 100 years, Germany will finally acknowledge its genocide in Namibia. An apology is not enough, writes Perivi John Katjavivi.

In his book, “Traumas Lost and Found”, Mark Wolynn outlines how a well-documented feature of trauma is our inability to articulate what happens to us. I’ve long recognized my country, Namibia, as a place where the past is seldom engaged. Where the stark inequalities and the still obvious racial divide is ignored in favour of a few glimpses of multiculturalism. Instead, fragments of memory, pain and loss are buried deep in our unconscious waiting to reemerge someday.

They emerged for me again a few years ago when I visited the grave of my grandfather. We had to ask the local white farm owner permission to enter the farm where my grandfather is buried. This is not uncommon. Some of the Herero were brought back to these ancestral lands after the genocide as cheap labor. Many others were sent to the reservations, which to this day remain poor inhospitable parts of the country. This is the relationship we now have with the land. It is an example of how bizarre the situation is and how the past and the present are not predetermined spaces that do not converge. Instead, this is rather personal.

After more than 100 years, Germany will finally acknowledge its genocide of the Herero and Nama people of Namibia. Chancellor Angela Merkel recently said her country will formally recognize and apologize for the systematic murder of Namibia’s Herero people more than a century ago. The governments of both Germany and Namibia are currently in talks to finalise the terms of the apology.

The genocide is considered the first of the twentieth century, and was carried out between 1904 to 1907. German troops oversaw the extermination of 80 percent of the Herero population. Of the more than 80,000 Herero population, only 15,000 survived. The Germans subsequently seized their land, their cattle and placed Herero and Nama prisoners in concentration camps.

The women in the camps were forced to dig up Herero graves and skin the skulls of their dead relatives. The skulls were transported to Germany where they were used in experiments to prove German superiority. At least 300 heads were taken to German laboratories. Many of these skulls were returned to Namibia in 2011.

I attended and filmed the ceremony at the Charité Universitätsmedizin in Berlin. Present was a government delegation from Namibia, and many members of the affected Nama and Herero communities. It was an emotional event which saw some of our Namibian elders insist they personally knew the identities of some of the returning skulls. The genocide was a testing ground for the racist eugenics theorist Eugen Fischer and for the occultist ideas that would later fuel Nazism.

Merkel’s government has been quick to insist that there will be no reparations, but rather targeted development projects. The coloniser dictates the terms of peace as well as war. What negotiations are taking place behind the scenes and how do they differ from the compromises that were made at independence?

At the 1992 land conference in Namibia, our first black Prime Minister, Hage Geingob, rejected the idea of land reformation based on ancestral land claims. But the spirits are restless and whether it is the ancestors or our unconscious drive to relive past events this remains something that deeply affects many Namibians today. It has to be dealt with honestly and openly.

I remember watching Germany win the World Cup in 2014. In the games leading up to the final, the site of German flags on cars parked outside bars throughout Windhoek was unavoidable. A brown-skinned boy interviewed by a local NBC crew reminded us that “we are a German country now.” Fanon would have a field day.

I wanted to partly embrace this New Germany with its position as the centre of a unified Europe (at least then.) They were a football team filled with Turkish and Polish immigrants. An image of a unified country as well as a unified Europe. However I found little here that resembled the attitudes of German Namibians. The bars many German Namibians filled up to watch the football are the sorts of places that routinely get accused of assaulting and / or of not serving black patrons. Is this the German country the young man spoke of?

These bars like Andy’s and Joe’s Beer House are decorated with old racist insignia. There was even a special Hitler birthday party at The Little Italian—a pizza restaurant in our capital city Windhoek. But it’s not just the attitudes but the architecture and the old colonial/Apartheid design of the city that is equally depressing. One of our streets was named after a heroic Namibian liberation fighter: Mandume Ndemufayo. The street ends at a memorial park which serves as a tribute to the colonial soldiers who killed and cut off Mandume’s head. It is this sort of schizophrenia that permeates the national conscience.

We know that the government of the Republic of Namibia could trace the genealogy of every white family in Namibia and send a massive bill to the descendants of every land owner and every person who engineered and benefitted from the genocide. That money could be redistributed in a large sum. However one has to seriously doubt whether that money would change unhealthy dietary habits, or enhance education skills, or teach the knowledge that seems to drive successful communities.

Rather we must acknowledge the fact that the wealth of nations is built on their human capital. One of the great myths of our time is that the political independence of the African continent released us from the horrors of our colonial past. Today’s white Namibians inherit assets and human capital that have been accumulated for over 100 years. Colonialism is treated as being ancillary rather than being fundamental.

We have an empty policy of reconciliation in Namibia which continues to support policies which go out of the way to accommodate the coloniser; the privileged; the one percent. And it is the perverted collusion between government, business, cheap black labor and white minority capital that continue to restrict the possibilities of an honest engagement with the past and a plan for the future that will benefit all Namibians.

In his article in The Atlantic, Ta-Nehisi Coates makes the case for reparations. However he argues for more than just compensation for past injustices—what he calls “a handout, a payoff, hush money, or a reluctant bribe.” He calls instead for something that would lead to a spiritual renewal. For Coates, reparations would mean “a revolution of the American consciousness, a reconciling of our self-image as the great democratizer with the facts of our history.”

I call for the same.

Perivi John Katjavivi is a Namibian filmmaker and writer. His first feature The Unseen played in competition at the Durban International Film Festival this year. He holds an MA in African Cinema from the University of Cape Town and continues to pursue work in academia. He also serves as Chairman of the Filmmakers Association of Namibia.