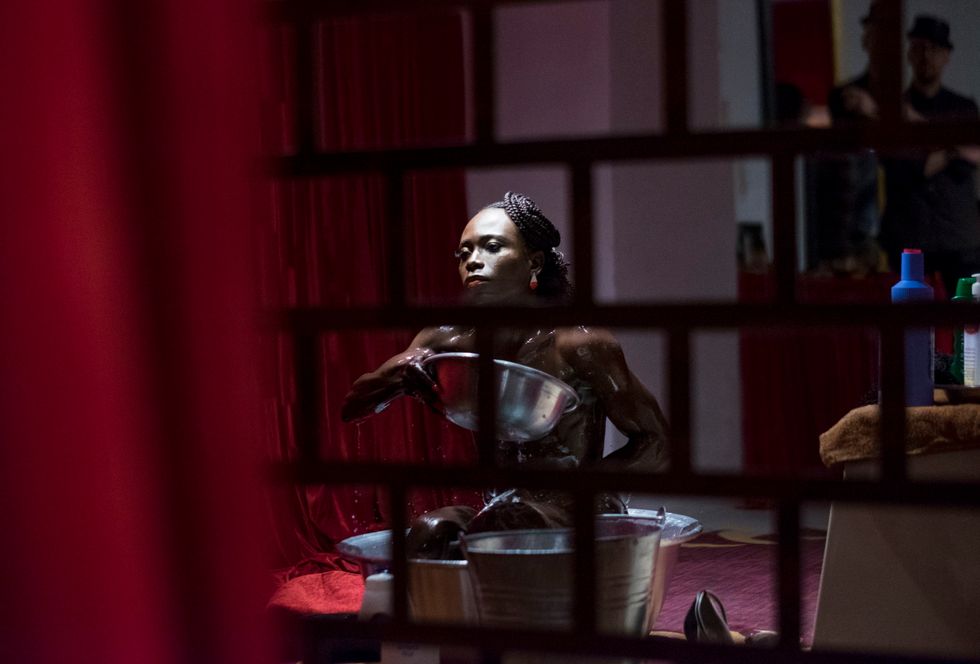 Ghanaian-Togolese artist crazinisT artisT explores the politics of the bodies of gender non-conformists with his new peformance art in Ghana.

Va-Bene Elikem Fiatsi, a Ghanaian-Togolese performance artist who performs under the pseudonym, crazinisT artisT, seeks to radically alter the place of performance art in Ghana by using his body to pose uncomfortable questions of his society in creative ways.

“I think performance art is in its renaissance phase, there have been artists, such as Bernard Akoi-Jackson, who have placed performance art on the international scene over the years, before some of us emerged,” the provocative artist tells me, in our interview following the opening of his major show involving a female character performed by a man. “Ghana is providing quite a few opportunities for young people to engage with performance, mainly in thanks to the progressive and revolutionary teaching at the department of painting and sculpture, KNUST.”

crazinisT artisT, Rituals of Becoming, performance at Gallery 1957. 26 February 2017. Photo by Dennis Akuoku-Frimpong. Courtesy of the artist and Gallery 1957.

His latest show which opened at Gallery 1957 on February 26 titled, Rituals of Becoming, is a profound statement that interrogates assigned gender roles and boundaries; especially of gender non-conformists, how they affect our habits, assumptions and behaviors as well as how inadequate they can be in portraying the complete sphere of human endeavor. In his own words, “I want to put some focus on our sense of belonging and the politics of our Body(s).”

By assuming the character of a young woman, crazinisT artisT seeks to unveil the critical nexuses that form the core of the female character as well as the weight of expectation that accompanies such prescribed gender roles. The artist invited the audience into his intimate space haven where he transformed the gallery with velvet red curtains that mask a network of mirrors. An assortment of skirts, gowns, underwear, purses and shoes layered the white walls—all of which have been worn by the artist over two years, when he began the process of assuming the role or character. “My greatest challenge was ‘negotiating with the space.’ That might sound funny but in fact I had to make a series of digital simulations, trying to strip the space of conventionality and the traditions of a commercial gallery,” he explains. crazinisT artisT, sectioned the theatrical space into various stations such as a bath, dressing table, a wall of photographs and also a video installation comprising a collage where he performed the various stages of becoming.

With his small masculine frame and tightly braided auburn hair, crazinisT artisT performed the rituals of embodying the female form for the audience present at the opening show. The artist led the prying eyes of the audience, right from his majestic walk into the gallery to his thorough bath with a bucket and metal pan, then followed by the very elaborate and carefully crafted act of picking out his outfit from the dozens of attires draping the walls of the gallery.

“I found it interesting how people react to the ‘crossing’ of ‘gendered boundaries,’ especially in Ghana.”
Although the process of dressing is nothing new, at each point, the audience was riveted to this act. Everyone has their own unique ritual they perform or method they follow to become who they are before they step out to face the world. Yet the audience sought to crack the motives of the artist which appears was to simply provoke a keener interrogation by the audience.

crazinisT artisT is not new to the Ghanaian performance art scene. Over the past few years, he has put on a number of strong performances that have awakened contemporary Ghanaian society to the potential of the art form including pieta-afriCan resurrect at Chale Wote Street Arts Festival 2015 and The Return of the Slaves at Elmina Castle in 2015 as well.

These past performances included physical manifestations of pain and entrapment with red paint, chains, shackles and limited movement. However, for Rituals of Becoming, the feeling of entrapment in more subliminal, as it truly exists in society. The artist is free, yet at the same time, limited by the expectations of society, especially, the strong, patriarchal gaze. Therefore, although the character is surround by choice, he is limited by a specific expectation; to manifest the idea society has of a woman. crazinisT elaborates on the factors that informed his decision as “the taboos, myths, and curses around this ‘character-play.’”

“I wanted to explore my exposure to such vulnerabilities and weaknesses as this character, and look at the conditions of marginalized people, importantly the queer gender and non-conformists,” he continues. “I found it interesting how people react to the ‘crossing’ of ‘gendered boundaries,’ especially in Ghana.”

The artist never completes the process of becoming to any specific female look but remains in a cycle of change. Midway through dressing up, crazinisT artisT lay on the floor to admire pictures from the process of assuming the character. “It took me two years to achieve the series of images used in Rituals of Becoming. The images were taken in a specifically designed studio for the convenience of this work, and I began taking them in 2015 when I started my masters (MFA).” He juxtaposed his current form against the studio patriots at various points in his transformation, sometimes mediating on a particular detail like a necklace or lipstick color.

Indeed, cross dressing or drag is not entirely alien to Ghanaian society. During the Apor Festival in Techiman, Ghana, inhabitants of the town engage in cross dressing to mask their identities and engage in social criticism. Also the Winneba Masquerades Festival sees men dress as women in reenactments of colonial masquerade balls. However, the artist does not borrow from these traditions. “During the festivals mentioned, and even in other instances like university hall weeks, cross-dressing is not seen as challenging these norms, but rather is done for the fun of it, entertaining its audience. However, to perform it as part of life becomes much more provocative, confrontational and challenging. It invites different responses, conversations, dialogues and contemplations compared to the other occasions mentioned.”

Curated by Amsterdam based international curator Maria Rus Bojan, Rituals of Becoming allows the audience to question their own assertions about gender roles and the rules that govern them as the images of this repetitive process of becoming are embedded in their minds.

Hakeem Adam is an instinct creative in love with beautiful sentences and the angst of communicating complex ideas in poetry. He frequently expresses this angst in simple sentences on his blog. He also loves to talk about African film and music classics on his platform, Dandano. Keep up with Hakeem on Twitter at @mansah_hakeem.