10 Reasons Why Tamale Is The Music Capital of Ghana 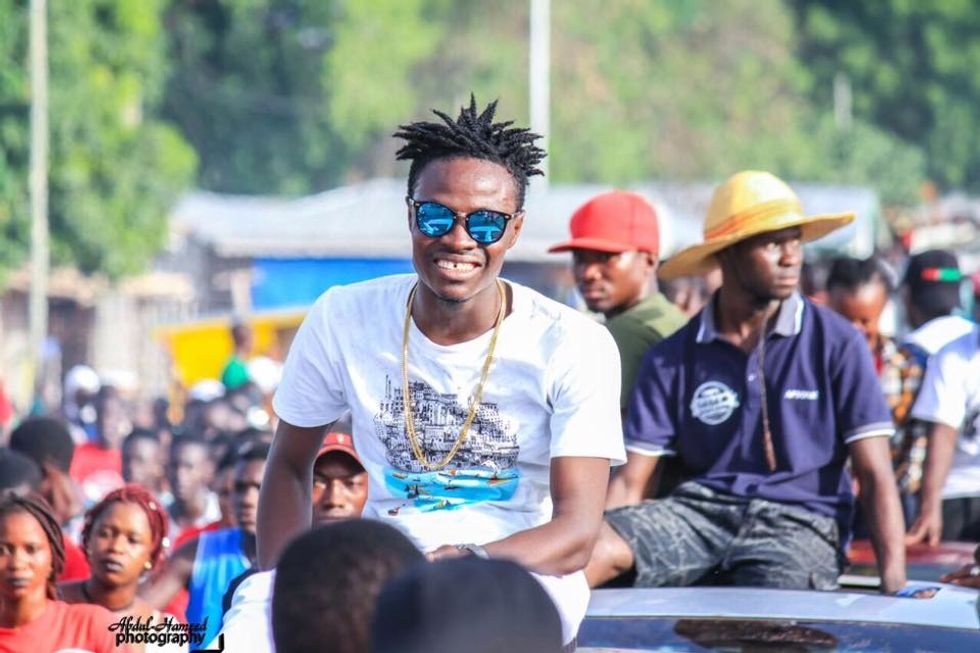 The city of Tamale combines culture and tradition with the contemporary to produce an unexpected urban musical space, demonstrating time and again that it's the music capital of Ghana.

The growth of contemporary music in Tamale drew directly from tradition with the likes of Sirina Issah, Sherif Ghale, Mr. Razak, Abu Sadick, andMama Rams, taking from their socio-cultural and religious positions to feed the essence of their music. The story of Tamale music is incomplete without the Blackstone duo, one of the first groups to gain popularity nationally with their "Be Fe Mano" and "N'Yura" songs.

Though contemporary music has existed for decades, the industry saw an explosion in the early 2000s when artists dabbled in genres beyond what had been built by pioneering artists. Today, Tamale's music industry is an interesting blend of music and musicians from various backgrounds, with most of the music production done in the city. The regional capital, Tamale, was one of the first cities to host a regional music award show, which inspired others to follow suit.

Earlier this year, we introduced you to some of the musicians in the Northern Region. Let's learn more about what makes one of Ghana's biggest cities the music capital of the country, despite music giants like Maccasio being snubbed for nominations in major categories at the Ghana Music Awards slated for this year.

Fancy Gadam made history by winning one of the coveted categories (Best New Artist) at the Ghana Music Awards in 2017. Although many claimed he was largely unknown in the South of Ghana, his incredible musical talent shot him to victory as a first-time nominee at the awards. Before the much talked about win, he was already on his way to setting records in the Ghanaian music industry by pulling hordes of fans at shows he headlined in the over 15,000-capacity Aliu Mahama Sports Stadium. Maccasio soon after, put together his own concert at the stadium which was massively attended by his large fan base, demonstrating to budding artists that they could follow suit.

Tamale's music industry has seen an explosion with Southern-Ghana based artists performing on various shows staged by the two music giants of the industry: Maccasio and Fancy Gadam. Musicians like Sarkodie, Shatta Wale, Stonebwoy among others have performed at concerts held by the two main artists. Fancy Gadam's stage style is unmatched as he thrills fans with his goosebump-inducing choreographed dances. Many music lovers appreciate the flavor he's adding to the industry. Fancy has successfully staged shows outside his home region (in regions like the Upper West, the Ashanti, and the Greater Accra regions) to the surprise of many. It's a feat many mainstream artists would not even dare to attempt. Maccasio's playful charisma and easygoing nature draws hordes of fans to his performances at the Aliu Mahama Sports Stadium.

Sherifatu Gunu remains one of the few Tamale musicians to gain (inter)national attention with her afrocentric style grounded in Dagbaŋ values and traditions. She reinterpreted folk music in, "Dingo,"which draws on a popular call-and-response song that celebrates agentive female sexuality; a song many of us sang and danced to growing up. Musicians like Nandos the Dagbandoo and Dabba Lamaley have experimented with blending traditional Dagbaŋ sounds from the goonje, drums and other indigenous instruments to produce music that defies genre categorization. Pioneer Sheriff Ghale used music to comment on issues like class inequality, politics, history among others. His song "Ni Yeli" (meaning "I Will Speak") which comments on free speech and press freedom has aged well since its release in 2004.

Although musicians in Tamale have been marginalized in the national musical imaginary they have strived to break into the national scene by collaborating with nationally known musicians. Fancy Gadam's collaboration with Sarkodie shot him to national fame. Fancy's recent song "Customer" featuring Patoranking shows that he is dedicated to breaking into the Nigerian market with his sights set on continental fame. Maccasio's "Dagomba Girl" with Mugeez (of R2Bees) has quickly become a favorite especially among female Dagbamba. In 2017, Puerto Rican musician, Residente collaborated with female folk music singers in Tamale to produce the Dagbanli-Spanish song, "Dagombas en Tamale," for the 2018 FIFA soundtrack list.

5. A Personal Touch to Publicity

Many artists in Tamale have developed publicity strategies to build relationships with their fans in the region and beyond. While musicians elsewhere only connect with their fans through periodic updates on social media, Tamale musicians add a personal touch to their brand by making their team available to fans 24/7 through the WhatsApp messaging app. This strategy has kept fans dedicated to the brand of these musicians because of the feeling of inclusion through constant access to the management teams of musicians. Many musicians have also bypassed legacy media to directly connect with fans through various social media platforms and other avenues like sticking event posters on public transport tricycles (Mahama Camboo/A bori mahim) among others. Beyond fan engagement, musicians have tied their brand to known beverage companies like Giant Malt (Maccasio) and Rasta Malt (Fancy Gadam).

Although artists in the Northern Region have been critiqued for using alternative distribution strategies to get their music to fan communities across the region and beyond, these strategies seem to be working for the musicians since it has made their music more accessible to their core fanbase. Many musicians who have steadily established their careers make their work available on YouTube, iTunes, and SoundCloud. However, these media libraries and streaming sites are mostly available to fans in the diaspora and local fans who straddle the middle to upper middle-class. For fans who come out regularly to support artists at concerts and shows, the music is made available for free downloads at Ghanatrase. Fans are encouraged to request for songs to be sent to them for free via WhatsApp on designated cellphone numbers. Therefore, musicians recognize the need to reach both local and global fan communities in their bid to stay in tune with fans.

7. Blurring the Boundaries Between Artists and Fans

One of the main reasons that drew national attention to the Tamale music industry is the nature of the relationship between fans and musicians. The city seems to be at the peak of its music culture. Here, everyone is drawn into the music culture irrespective of gender, age, ethnicity, class, or sexuality. It is not uncommon to find older women participate actively in music fandom. The city has utilized music in this manner to break the generational boundaries that would otherwise exist in music audiences. Although most Ghanaian media focuses content disproportionately on political issues, in this city politics competes with music for audience engagement. The interconnectedness of music and the culture of the city can be difficult to conceptualize sometimes. Musicians and groups like DMTL, Don Sigli, Maccasio, Fancy Gadam and Nandos the Dagbandoo engage fans actively in music production by using them as extras and or dancers in music videos ultimately blurring the boundaries between music production and consumption.

Tamale's music industry is more vibrant now than ever because industry stakeholders understand the cultural, social and religious context within which they operate and utilize this understanding to gain goodwill from the public, traditional leaders and sometimes politicians. For example, when Fancy Gadam won the Best New Artist at the 2017 Ghana Music Awards, he went to the Naa Dakpema's palace to pay homage to the traditional leader. During the Ramadan season, most entertainment activities like concerts, album launches, carnivals among others are put on hold in observance of the holy month. This demonstration of deference for the culture and traditions of the city has positioned the artists in the good graces of both the public and stakeholders of the city. As part of promoting Northern Ghanaian culture, Maccasio in collaboration with telecom giant MTN is getting ready for The Smock Show on March 31 at the Aliu Mahama Sports Stadium. According to him, various traditional northern dances will dominate the stage and the hope is that fans show up in their numbers wearing traditionally0-woven and designed smock outfits. This show not only supports cultural affirmation but also draws attention to the traditional fabric industry in Northern Ghana.

Tamale's music industry has seen immense support from industry players like radio and TV presenters, video directors, sound engineers, management teams among others. Many have attributed the success of this city's music industry to the amount of airtime Tamale music gets on radio and television and how much buzz they get on social media. TV presenters like Sadick Cybha and Gee Face keep media audiences interested with their thought-provoking discussions and hot takes on various issues in the industry. On the radio, DJ Parara, DJ Tell, Ewurama Attoh among others have moderated discussions on the growth of the music industry. Mohammed May of Ghana Trase has utilized his large social media following to facilitate discussions on the industry. Video directors and producers like Joe Gameli and Zakvilla have helped actualize some of the concepts for music videos. Sound engineers like Ojah Drumz, Tizzle, Blue Beatz, Dr. Fiza, Stone B, Flamez among others have been the brains behind some of the biggest hits to come out of the region.

The commitment of music fans means that they're always ready to come out in their numbers to support musicians. Pre-show street floats have become a norm in Tamale where fans come out in hordes to create awareness about an upcoming music concert, show or album launch. During these floats, music fans take over the principal streets of Tamale on their motorbikes clad in artist paraphernalia to support their favorite musicians. Apart from floats, street carnivals are becoming a trend in the city. Maccasio's Zola Street Carnival which is organized around the major Muslim festivals (Eid-ul Fitr and Eid-ul Adha) draw music lovers from all over the city to Zogbeli-Lamakara to celebrate these festivals.

Tamale which has been touted many times as West Africa's fastest growing city is proving that it is indeed the music capital of Ghana. Many mainstream Southern-based artists are clamoring to be invited as guest artists to concerts in the city. Shatta Wale composed a song in 2017 called "Tamale" to express appreciation for the vibrant music culture in the city. Last year, Sarkodie who was invited to perform at Fancy Gadam's SallahFest did not only deliver an eclectic performance at the show but took advantage of the large following to later share pictures of him surrounded by hordes of fans from the SallahFest pre-show float without due attribution, something some Tamale music industry players called him out on.

Tamale has demonstrated that it is untrue that Northern music is not sellable and that Northern musicians need to relocate to the South to become successful. Industry stakeholders have worked tremendously to establish one of Ghana's biggest cities as the music hub of the country. This way, musicians do not only entertain the public, they also contribute to a media documentation of the culture of the community which in turn affirms, re-defines and preserves the culture of the city.