It's #RepublicDayBut... Ghanaians Tweet On The State Of The Nation 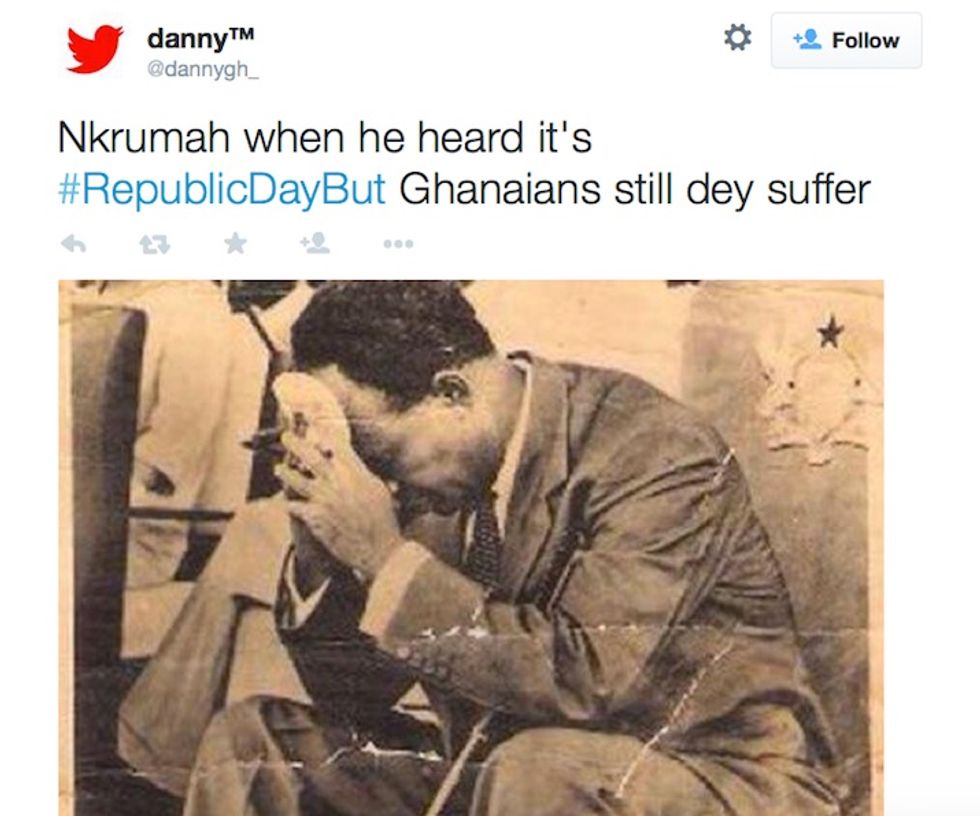 Ghanaians take to Twitter on Republic Day to air their frustrations on the state of the nation.

For two years in a row, Ghanaians are marking the Republic Day holiday on Twitter with a hashtag meant to jolt President John Mahama and his government into caring about the welfare of its citizens. Last year's #OccupyFlagStaff movement culminated in a peaceful demonstration in which a group of about 500 Ghanaian citizens decked in red and black gathered outside the front gates of President Mahama's residence and office. Momentum surrounding the protest fizzled out, though, and Ghanaians trudged on despite steadily worsening economic conditions.

This year, Ghanaians are banding together on Twitter to shed light on the precarious state of the economy 55 years since the election of Ghana's first president, Dr. Kwame Nkrumah, on July 1st 1960. Participants are using the hashtag #RepublicDayBut to vent their frustrations on topics that have been talking points among Ghanaians for the last few years, including the interminable Dumsor power outages, increases in fuel prices and utility tariffs, the depreciating value of the Ghanaian Cedi, and lack of job opportunities. The conversation today has also given rise to the hashtag #DearPrezMahama, which Ghanaians are using to directly address the president about his approach to governance.

Below, we take a look at what Ghanaians are saying about the state of the West African nation today.

#DearPrezMahama you are an epic failure to the nation. No sorries here

#RepublicDayBut Still Mahama Is Our President 😢

#DearPrezMahama, I can't even say Happy Republic Day and mean it. The conditions are too depressing. 😒

#DearPrezMahama workers salaries have stagnated whilst prices have spiralled; inflation is now 16.9% and the cedi is 4.30 to one dollar — Hardi Yakubu (@hardiyakubu) July 1, 2015

#DearPrezMahama why is your government so irresponsible? There is nothing wrong to ask for help if you need it @JDMahama — Kwabena Asare (@kwabena_asare) July 1, 2015