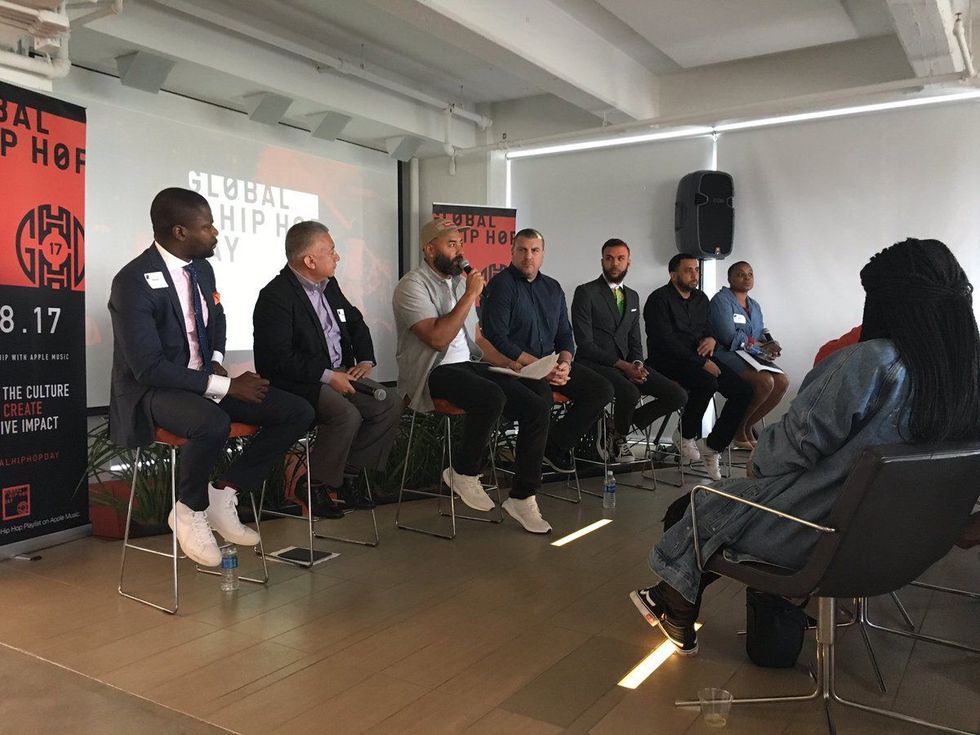 The best in the business gathered to talk hip hop culture and commerce on the first ever Global Hip Hop Day in New York City.

NEW YORK CITY—Today the City of New York, the office of The Bronx Borough President and HOT 97 kicked off the inaugural Global Hip Hop Day to honor the genre of music that brought and continues to bring communities and cultures together.

Prior the the festivities unveiling Hip Hop Blvd (1520 Sedgewick Avenue) in The Bronx—the birthplace of hip hop—followed by a block party open to the public, an intimate group of industry tastemakers and moguls gathered this morning for an insightful conversation, moderated by HOT 97's Ebro, to talk about hip hop culture and commerce.

This dynamic panel discussed the influence and business hip hop has on the global scale. Take a look at a clip from the conversation below.

The second discussion featured rapper and actor Joey Bada$$, prolific producer Ryan Leslie and former Def Jam president, Kevin Liles, where an intergenerational conversation occurred around what it means to be a partner versus what it means to endorse as a hip hop artist navigating the industry in 2017. The three trailblazers also touched on and emphasized the importance of the old heads learning from the innovative youth, and vice versa.

Take a look at the clip from the panel below.

After the program concluded, OkayAfrica got to catch up briefly with Joey Bada$$ and Ryan Leslie on how the afrobeats crossover contributes to the global hip hop narrative, as well as a tip for up-and-coming African artists to build an audience.

Joey Bada$$ notes that Wizkid and Davido are friends of his, and he's in full support of their crossover come up.

"I love the fact that international artists are getting more love light and attention," he says. "I think it's extremely important because this is a culture that started in one place and it literally has moved to every corner of the world. I think it's very important for us to realize that, to appreciate that, to acknowledge that for these artists who are very talented to get the shine that they deserve."

We couldn't miss an opportunity to pick the genius brain of Ryan Leslie. He gave us a piece of advice to relay to young African artists on how they can own their audience and build a strong platform, especially with the use of social media.

"I really only have one tip. Invest your time and relationships both with your fans and with your team and with anyone that you believe is actually going to support you," Leslie says. "Every single conversation is an active channel...it's also a lifetime conversation channel. Every single message that you send to someone is an investment in your future relationship with them, but it's also an investment in the future that they have for themselves. It's important for everyone that wants to succeed in any capacity, especially in music, to build, invest in and cultivate relationships."

Stream our Global Hip Hop playlist, in celebration of today, below.