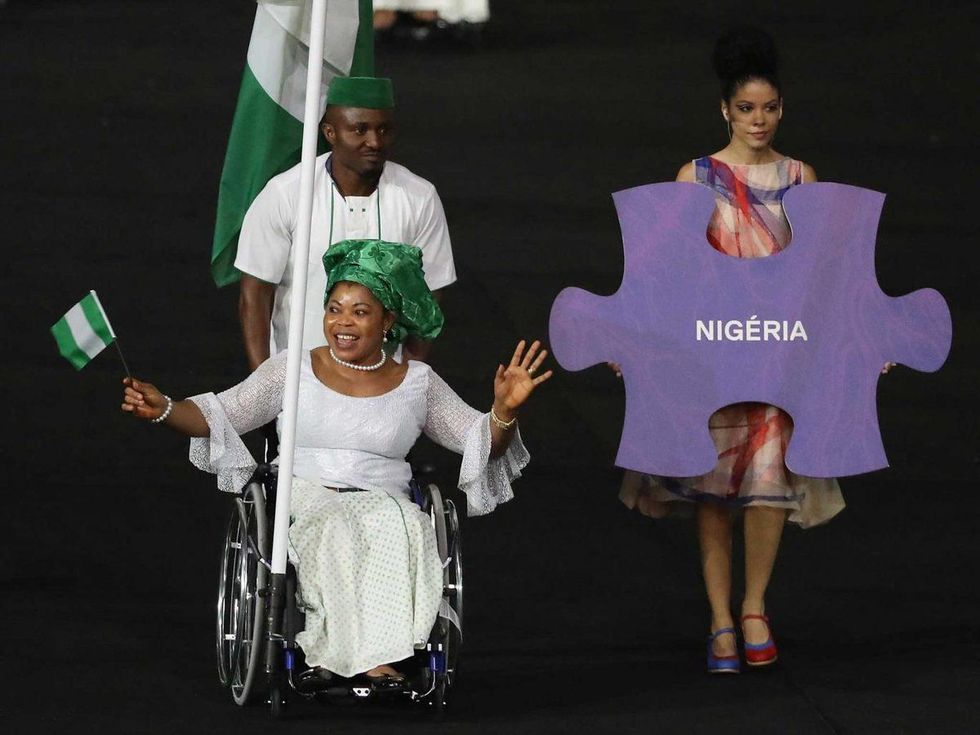 For the latest installment of #Goals, we speak with record-holding, Nigerian Paralympian Lucy Ejike about how her quest to help other athletes with disabilities find success.

During the month of August, we’ll be highlighting aspirational folks who are setting major #goals and achieving them, and asking them to share their stories and insight to help motivate us all to “live our best lives.”

Previously, we spoke with Nigerian comedian, Okey Bakassi. For our latest installment, we speak to Nigerian Paralympian Lucy Ejike. Read our conversation below.

Lucy Ejike, the Paralympic queen of powerlifting, is no stranger to setting and breaking world and Olympic records, despite being afflicted with polio.

The 39-year-old has represented Nigeria in five consecutive Paralympic Games from 2000 in Sydney to 2016 in Rio de Janeiro, where she served as team captain. She has won three gold and two silver medals in the course of her illustrious career.

Ejike's story is one of resilience and courage. Not one to rest on her laurels, the mother of two is already gearing up to compete at the 2020 Paralympic Games. We got a chance to catch up with the star athlete ahead of her training. Read our conversation below.

Shayera Dark for OkayAfrica: How did polio impact your childhood in Nigeria, where provisions for physically-challenged people in public spaces are mostly absent?

I was a year old when I contracted polio. My parents took me to the hospital but I would not walk again. My mother said I reverted to a new born baby as I could not even sit. Polio disfigured my stature, delayed my growth and prevented me from starting school when I was meant to.

As for the challenges I experienced as a disabled Nigerian, since I could not trek long distances to school, my father enrolled me in a home for the disabled, where I lived until the term ended. In university, getting to my lectures with crutches was difficult as there were no elevators. I had to climb up a two-story building every day.

How did you get involved in powerlifting?

I was introduced to sports at the home for the disabled in Enugu where I stayed during the school term. We trained at the stadium and sports council. Powerlifting piqued my interest because it was easy to measure performance as you’re mostly in competition with yourself. Winning is dependent on the weight your body can lift.

What was your family’s initial reaction to your decision to become powerlifter?

With my disability, my family was worried because they saw me lifting weights that were heavier than me. But they came around when they saw I enjoyed powerlifting and wanted to show the world that there are abilities in disability.

Can you elaborate on your training regimen and how you prepare yourself mentally for competitions?

I train two hours a day, three times a week. But whenever I have an upcoming competition, I add an extra hour to my regime and train four times a week, do more repetitions and watch my diet.

Lack of funding from the government has meant training equipment and facilities for Paralympians are dilapidated.

How have kept your spirits up in spite of these challenges?

My determination to achieve my goals and ability to manage and work with the equipment I have has helped keep my spirit up. I don't trouble myself with the condition of the country—I use whatever equipment available whether or not it’s the standard for powerlifting. When I prepare for competitions, my primary focus isn’t on what I’ll gain from winning medals, but on winning itself.

Have there been times you wanted to give up powerlifting and, if yes, what kept you going?

Yes, balancing my powerlifting championships with school work was difficult. My grades suffered and some of my lecturers advised me to drop one for the other. But I couldn’t because I was being sponsored as an active athlete by the Enugu State government and using the money to fund my education. Thankfully, I learnt to better manage my time and didn’t have to neglect my powerlifting career for school and vice versa. I was determined to make both work.

#ThrowbackThursday: to Nigeria's Lucy Ejike's reaction when she set a new World Record in the women's -61kg at Rio #Paralympics #tbt pic.twitter.com/KDIBeOydfk

Nigerian Paralympians at the Rio Games outperformed their Olympian counterparts, bringing home twelve medals, of which 8 were gold. Does the lack of recognition for Paralympic athletes by the Nigerian government frustrate you?

Yes, it is discouraging seeing your counterparts from other countries celebrated and recognised for their hard work and you are not. It’s very painful and discouraging.

You’ll be 42 in 2020. Will you be a force to reckon with at the next Paralympics games?

What are your dreams for the future beyond powerlifting?

I plan to start a foundation for sports development among disabled athletes. I want to encourage them to rise above their disabilities and organize competitions for athletes, where winners are awarded prize money to support their training.