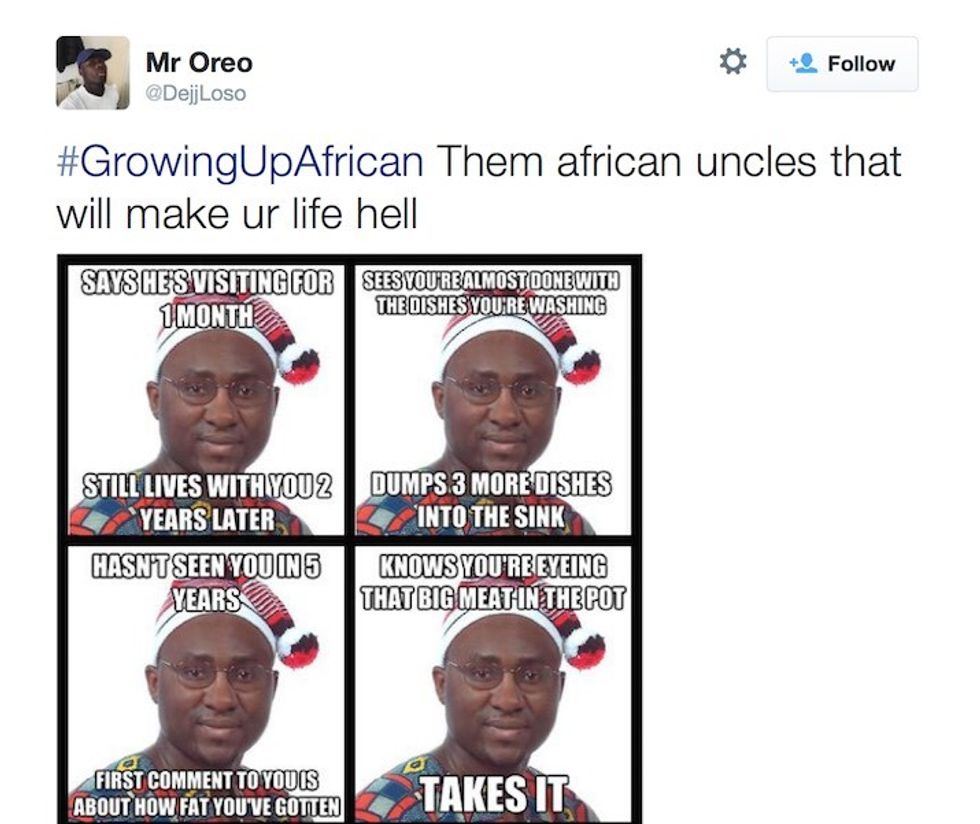 Yesterday, the hashtag #GrowingUpBlack began trending as a forum for black Twitter users to share formative childhood memories and experiences. Though the hashtag was open to users worldwide, it primarily found traction in the U.S.-- where it originated-- among African-Americans. For African Twitter users with no connection to those markers of a Black American childhood, a continent-specific hashtag titled #GrowingUpAfrican sprung up today.

Since it began trending this morning, the hashtag has been populated by light-hearted tweets on shared parental discipline styles, cultural mores, and recognizable childhood treats in addition to thought-provoking anecdotes on having to deal with offensive stereotypes as a first-or-second-generation African migrant in the diaspora. In the wake of #GrowingUpAfrican's widespread appeal, users have also created offshoot tags like #GrowingUpEritrean, #GrowingUpNigerian and #GrowingUpZimbabwean.

Below, we selected some of our favorite #GrowingUpAfrican tweets from today.

When you heard 'Go and bring the cane!' You knew you were in trouble. #GrowingUpAfrican

I used to eat this straight out the can. No milk no water #GrowingUpAfrican #GrowingUpNigerian pic.twitter.com/15B3Ld3tFz

#GrowingUpAfrican whenever your parents asked "what did you say?" You're not actually suppose to repeat what you said.

Jollof can be eaten for breakfast, lunch and dinner. #GrowingUpAfrican pic.twitter.com/u7WfMmZEHo

#GrowingUpAfrican Me: I'm hungry Mom:There's rice in the fridge Me: I don't want rice Mom:Then you must not be hungry pic.twitter.com/LdnXFVVhDD

#GrowingUpAfrican "Do you guys speak in clicks?"

#GrowingUpAfrican Knowing that there is no "16 & Pregnant". There's only "16 & Getting Shipped Back To Africa To Learn Some Discipline".

#GrowingUpAfrican you learn to grow to fit in. From society to clothes meeennnn...

Your parents talk shit in front of you, but brag to their friends about you accomplishments behind you back 😂😂 #GrowingUpAfrican

#GrowingupAfrican Grandma: Go and call Ayo, your mother for me Me: Ayo, grandma is calling you Ten minutes later: pic.twitter.com/CFNcJqi97h

When you ask your parents where you should put something, and they say put it on my head #growingupafrican pic.twitter.com/D2RmUiCU6c