Guest Appearances on Drake’s Views: An Exercise In Rampant Speculation 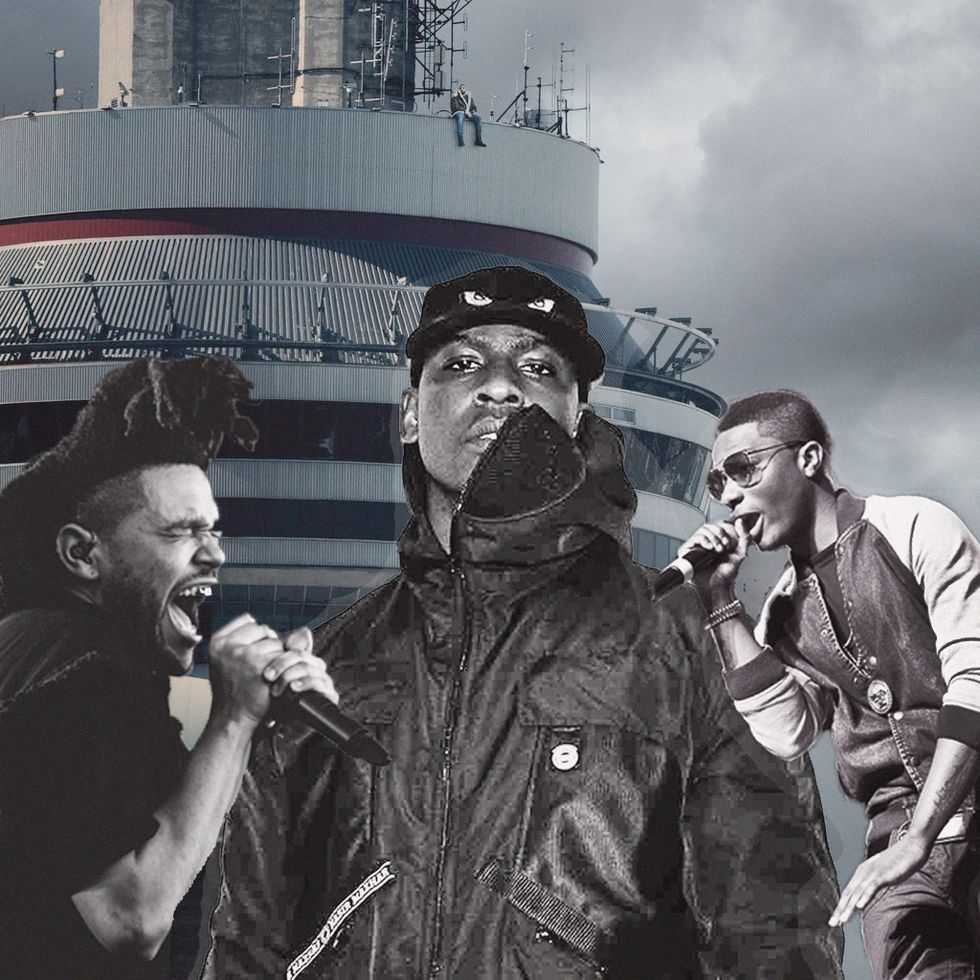 Here at Okay HQ we’ve been busily speculating about what guest stars The 6ix God might be bringing on board—crossing our fingers that last year’s fire remix of Wizkid’s Ojuelegba was a sign of good things to come.

Toronto is one of the most culturally diverse cities in North America, counting roughly 51 percent of its citizens as having been born outside the country. It’s not surprising then that the singing rapper, who has dedicated himself to channeling “the 6,” in all its iterations, would take such a global approach to his music.

This will all be revealed, we hope, tonight on OVO Radio, but until then we’re going to channel our nervous energy into some totally necessary speculation.

No song has been played more in our offices over the last year than “Ojuelegba,” either in its original form or as the Drake remix. Wizkid and Drake were a surprising yet perfect combination on the remix with Skepta adding some badly-needed toughness.

Can’t say I wasn’t a little disappointed that the much-hyped collaboration with Wizkid on “One Dance” was barely audible. So, while it’s not speculation to say that, yes, Wizkid will be appearing on Views, we’re hoping it’s in a more substantial capacity than what “One Dance” has offered us so far.

A lot of Drake fans were pretty confused by February’s news that Drake was “the first Canadian signed to Boy Better Know,” a British grime label led by the resurgent Skepta. Joseph Adenuga alongside his brother Jamie—Skepta and JME respectively—are UK grime scene royalty and Drake seems to have developed a bromance of sorts with Skepta, getting a Boy Better Know tattoo on his left delt. Drake’s Vine brag of “Truss Me Daddi” was later sampled on Skepta’s epic posse-cut “Shutdown.”

Drake’s UK connections run deep. In 2012, he name-dropped the Nigerian-British rapper Sneakbo. The connection was made apparently during one of Drizzy’s wine-fueled Youtube binges where one minute he was watching a documentary on London gangs and the next he was watching Sneakbo rapping over some dancehall beats. Toronto is a dancehall-mad city so it’s not surprising Drake’s tastes gravitate toward that sound. Again, fingers crossed for some sort of genre breaking dancehall-inflected, Sneakbo collabo.

The British-born, Sierra Leonean-rooted producer and songwriter Sampha Sisay already appeared on the melancholic “Too Much,” one of my favorite tracks off of 2013’s Nothing Was The Same. Club bangers are OK but what I really want from Views is more of Drake’s characteristic moping, meaning fingers crossed that Sampha’s involved somehow.

Drake endorsed the Ethiopian-Canadian alt-R&B of The Weeknd when he first tweeted and blogged about his House Of Balloons mixtape. He later featured him on Take Care. In a lot of ways the young padawan has surpassed his jedi master with reams of number ones and an Oscar nomination for his work on the BDSM-film 50 Shades of Gray. Fresh off a guest appearance on Beyonce’s Lemonade, The Weeknd might be getting a little big to play the part of mentee.

Someone we probably won’t be seeing on this album is the Toronto rapper Mo-G who, after riding-high off numerous OVO cosigns in recent months, turned against the crew claiming his swagger was jacked with little to no remuneration. The Somali-Canadian rapper is the inventor of the Ginobili, one of Drake’s signature dance moves.