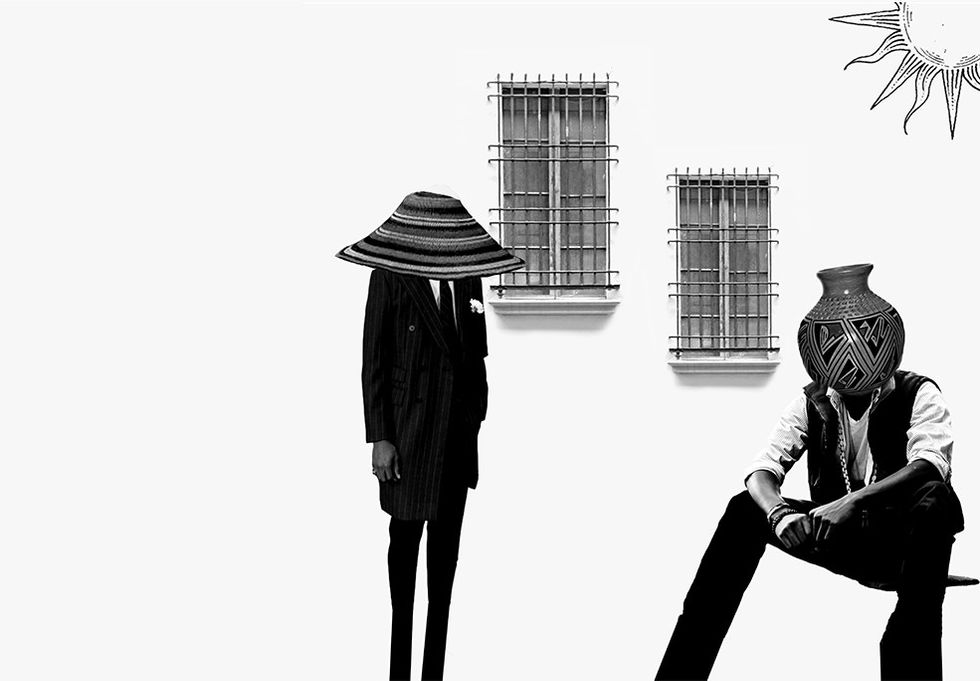 Okayafrica catches up with Sandra Chege, creator of Hadithi, where Kenyans can submit thoughtful letters to self.

You can now read touching letters from about 100 Kenyan contributors on the themes of self, motivation and purpose, family, love, pain and release, and everything in between on this slick, new site.

Sandra Chege—marketing professional, arts manager and co-founder of Nairobi’s popular ‘Hip-Hop Karaoke’—is the brains behind Hadithi, where she asked people with a “willingness to be open, vulnerable, honest and genuine” to get personal. You’ll be sure to recognize a host of familiar names, such as filmmaker Wanuri Kahiu and media personality Adelle Onyango, where they delve deep into experiences that fall under one of the six themes.

Chege worked with visual artists to bring the words to life visually, including Bazil Ngode, whose work was featured on BBC Africa’s Instagram account. Hadithi has had three installations since it started in January 2016, where people put up notes and letters for audiences to take in. The first one occurred at the Mchuzi Mix event in Nairobi, where the letters and notes remained for one month. The second and third installations took place as part of the East Africa Soul Train and the Mustered Soul Hadithi events respectively.

Take a look at a few excerpts below:

How loved you are! You just don’t know it yet. You may feel you are undeserving of your dreams or unworthy of your ambition. That is not true, dear heart, the world has enough love to reward you for all that you have not yet achieved, all that you will be and all that you will love.

A month after I turned 23, my mother died after a 10 year battle with cancer. It was not a death we were prepared for. I mean we had spoken the day before she died—we spoke everyday. That Saturday morning, I woke up ready to go for my first ever yoga class. I was leaving my room when my sister met me at the stairs with her phone in her hand. She was shaking her head and just kept saying “mummy”. I have never experienced such loneliness as I did at that very moment and the next year to come.

No amount of Chicken Soup or YouTube hours will sufficiently preempt the rollercoaster you’re about to get on. Just like you had to craft a way around the stone age roommates and lousy food in campus, so will you have to navigate this next turn in the constantly unravelling adventure that is your life experience.

There will be fights over what name(s) to give the newborn and whose turn it is to change his diaper. There will be tormented nights and blissful mornings when you will simultaneously want to never lay your eyes on him again without letting him out of your sight for a second.

You fall in love with him a couple of times over the next eleven years.

The first time you kiss you bump teeth and the awkwardness of it all earns him a badly drawn medal for “worst kisser ever” in your journal. You were sure you would die.

Over the next two years you pine and ache as you give him relationship advice for what feels like 300 poor decisions that precede you.

Eventually the stars align. He tells you that you are beautiful. He kisses you and your heart cracks open and radiates enough joy to fuel a small planet.

Okayafrica also spoke with Chege on the origin of Hadithi and its cultural importance:

Josephine Opar for Okayafrica: Why do you think a platform like ‘Hadithi’ is needed now?

Sandra Chege: The idea is timeless. For centuries letters have connected people across time and space. Today we’re more connected than ever but more disconnected than ever. We need to be more deliberate about getting to know ourselves and look for as many genuine interactions as we can get. Online it is increasingly easier to distill any and all emotions with emojis and memes. I love them. They’re great. But sometime you need more. When I was grappling with the emotions around the second anniversary of the death of my best friend, the internet felt its coldest and I knew I couldn’t be the only one who felt it. Because of this, it felt urgent and necessary to create a safe space where people could speak honestly to themselves and find themselves in others.

There are a number of celebrities on the site, how did you convince them to be a part of the project?

I asked and they said yes. The first 100 people that I asked to write are either friends or people I have interacted with from within my circle. I felt that reaching out to a few familiar names could add to the reach of the project and could also influence positively how people interact with the letters. The hope is that when people read a celebrity letter and a stranger’s letter, they see a little of themselves in it and start thinking about their relationship with the ideas and emotion of the letter.

How do you see Hadithi evolving in the future?

The plan is to eventually have a print edition of Hadithi [and] to incorporate some audio and video on the site as well as run an event. Still playing around with the format but I’m really excited about all of it. I know with projects like this you have to leave room for the unknown, so I look forward to that too. There is Hadithi merchandise out- blank cards, post cards and tote bags. I am looking for ways to distribute so keep your eyes peeled.

How did you come up with the themes on the website?

From the entries, the letters seemed to filter themselves into [six themes]:

Is there anything you’d like to add that I have not asked?

Process. Hadithi has morphed severally from the first time I wrote the idea down. It is the most collaborative, organic project I have ever done. I have learned so much about myself, and so much about my friends and strangers alike that I can’t believe I hadn’t done this sooner. Everyone should write to themselves. The process in unlike any other. If you’re open to sharing, share it with us, or with other because you won’t believe how willing people are to listen and give if you’d only just ask.

Be sure to read all the letters in full here.