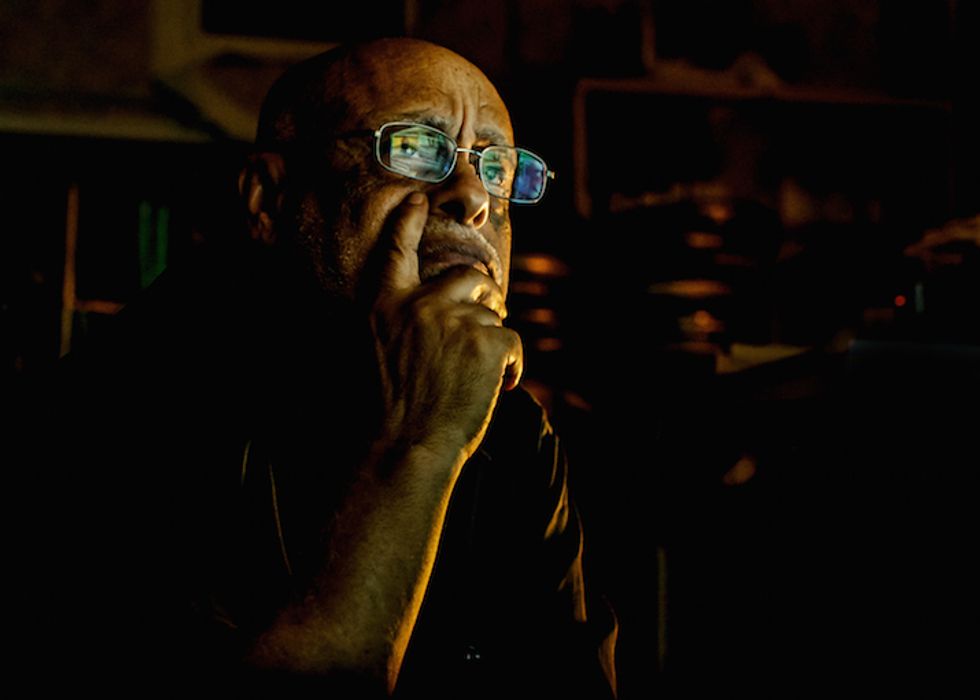 When I first met the DC-based Ethiopian filmmaker Haile Gerima it was the year 2000 and I was a 19-year-old kid in a cipher in Vancouver, BC– perhaps the only rapper there with Ethiopian roots– freestyling outside of a screening for his now-classic film Sankofa. Haile joined our circle and said, "This thing that you're doing is everywhere! I was just in Europe and I saw each of you," and he told us to keep telling our stories.

I spoke to him later and told him how much it meant to hear those words from an Ethiopian my parents’ age, a generation that has often ostracized its young for pursuing the arts, and I asked him for advice about a film idea I had. He gave me his card and said "Come to Howard. I'll make sure you get into my program." I never did follow up with him about that.

Sometime in 2008 I found myself in Northwest Washington, DC, at a spot across the street from Howard University (where Haile still teaches). Founded by Haile and his filmmaker wife Shirikiana in 1997, the sign read SANKOFA: By And About People of African Descent (Sankofa, an Akan word that loosely translates to "go back and get it," has become a symbol for African people throughout the diaspora to get to the future by understanding their past).

I quickly learned that this house with the huge patio and front yard was more than a bookstore, venue and place to seek out hard-to-find movies. It was more than the delicious food, smoothies and what may very well be the best coffee in DC. Over the years Sankofa Video, Books & Cafe has become a hub for forward-thinking people of African descent to invest in all forms of media-making.

I never took one of his classes, but on several occasion I had the chance to perform on the very steps in front of where Haile does his editing. It was there that I learned of his collective filmmaking process and built deeply with his students. My 2014 album Children Of The Dragon, which took its concept directly from a conversation around Haile's film Teza, was the result of collaborations with people I met during my time at Sankofa. Haile taught me that storytelling can be a form of exorcism. How to vomit onto a page, in whatever form or language comes the most natural, and then edit from there. To be uncompromising with your art, and to tell the story you hunger to hear.

"It's not just getting a camera and shooting, but also shooting the aura of a people. I am interested in the soul of Ethiopians." –Haile Gerima

Haile's latest film, Teza, is a multiple generation story that captures the feeling of Ethiopia on the eve of a revolution, and goes further to explore the effects of white supremacy on Ethiopian people who have been forced to migrate as well as those throughout the diaspora. The film, and its textured fabrics and church paintings, masenko solos and love songs over Lake Tana, captures the soul of our people in a way I haven't seen done before. Watching it with older members of the Ethiopian community in Seattle was like an act of healing from generational trauma. It inspired the sort of cross-generational conversations we'd been needing to have.

Haile came to filmmaking as part of a generation known as the L.A. Rebellion, a revolutionary school of Black filmmakers, including Julie Dash, Charles Barnett, Ben Caldwell and Larry Clark, who got their start between the late 1960s and 1980s. It was from there that he learned to make internationally renowned cinema without any major financial support. Haile's 1982 film Ashes & Embers took home festival awards in London, Berlin and Lisbon, and his latest work, Teza, won awards at nine different festivals, including Best Film at the France International Film Festival and the Tunisia Film Festival.

At the beginning of June, Haile and a team of young and emerging filmmakers came together to launch a crowdfunding campaign for his new project, Yetut Lij. In Amharic the title translates to "Child of the Breast," but usually refers to any child raised by someone other than their biological parents. The film's main character is Aynalem, a 13-year-old peasant girl who is adopted by a wealthy judge's family and taken away from where she grew up. Though promised an education and a better life, she's instead brutalized and forced to work as a domestic servant. Like Haile's past films, the story implicates the struggle of marginalized and oppressed people of color, in this case women and girls who are exploited as domestic servants.

"This girl lives with me all my life, she has a piece of me," Haile recently said about Aynalem. "Before I left for America I see her, I shot her in this image... she haunts me. That's the schizophrenic life I have in America. My body here, my mind there. Flashing to these images of these people who's eyes looked at me honestly. And I'm trying to work out a few films before I die to say 'I remember these things'"

You can learn more about the Yetut Lij campaign on Indiegogo. If you're in the DC area, there's a full series of events celebrating Haile Gerima's work throughout the month of June.